The ongoing Lexicon of Greek Personal Names (www.lgpn.ox.ac.uk) seeks to identify every bearer of a Greek name from the 8th c. BC to c. 600 AD.  This is the first of what is intended as a monthly series of short studies discussing the early history of modern names.

Why would any parents call their daughter ‘Barbarian Woman’?  It came as a shock to me to realise, having like most of us known various women called Barbara all my life, that Barbara is just the feminine of the Greek noun barbaros, ‘barbarian’, which is always explained as imitating the incomprehensible ba–ba noise that is what Greeks heard when listening to languages other than Greek.  (What they heard when listening to sheep was different: βη, like ‘bay’ in ‘bay of Naples’.)  For modern times the answer to my question is easy to give: parents calling a daughter Barbara don’t think of ‘Barbarian Woman’ but of other Barbaras they have known or heard of, or they just like the name which, as is the way of names, has associations but no meaning.  Like so many other European names, it initially became popular from reverence for a saint, a virgin supposedly martyred for her Christian faith during the persecution by the Roman emperor Maximian c. 303 AD.  Much of her popularity was due to the dramatic telling of her story in the Golden Legend of Jacopo de Voragine  (13th c.).  The Oxford Dictionary of Saints qualifies her as ‘date unknown’ and gloomily states that ‘the very existence of this supposed virgin-martyr is doubtful’.  However that may be, there is no difficulty in supposing that a woman called Barbara existed at that date; another Barbara was supposedly one of forty women martyred a little later at Beroe in modern Bulgaria. That second Barbara is the only Barbara to appear among the 400,000 or so individuals so far listed in the Lexicon of Greek Personal Names; the first was presumably excluded because of the suspicion that she may never have existed.  But the Lexicon knows twenty five individuals called Barbaros, the masculine form, concentrated in ancient Thrace (now north eastern Greece and Bulgaria) but scattered further.  The name passed into Latin, as many Greek names did, and became commoner in Latin than Greek; there are more Latin than Greek Barbaras (several of them Christian) too, and even a Barbarula daughter of a Barbara.

But at this point my original question comes back: why call your son or daughter ‘Barbarian’?  It has recently been shown that the name Hellen, ‘Greek’, which was popular in Thrace, was borne not, as used to be thought, by immigrant Greeks but by native Thracians proud of their integration into the Greek cultural world.  So the exact opposite of Barbaros!  At a certain point Barbaros/Barbara no doubt shed its barbarian associations and became, what Barbara is now, just a name.  But when?  I have no answers to these questions for the moment. 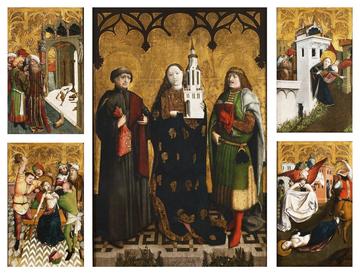