Brazil at the crossroads: looking beyond the current crisis

The TORCH workshop on Contemporary Brazil, titled ‘Brazil at the crossroads: looking beyond the current crisis’, brought together senior and early-career researchers whose work and research interests focus on Brazilian society. Through their presentations and reflections on a wide range of themes, workshop participants and attendees engaged in a stimulating discussion of long-standing, new, and ongoing socio-political issues in Brazil.

The workshop opened with Julia Sauma’s paper titled ‘Race, land and collectivity in Brazil: the Quilombo case’. Dr Sauma is a Postdoctoral Research Fellow at the University of Bergen, Norway, currently working on the ERC Project ‘Egalitarianism: forms, processes, and comparisons’. Her work focuses on the political cosmologies of Amazonian maroons. In her paper delivered at the TORCH workshop, she discussed how quilombolas in the state of Pará critically engage and navigate state technologies of recognition. Tying her ethnographic work with the notion of ‘black fugitivity’, Dr Sauma analysed the central role land and political engagement hold for quilombolas and delved into the wavering nature of identity tensions within some of the communities she works with.

Guilherme O Heurich, British Academy Newton International Fellow at the Anthropology Department at UCL, gave a paper titled ‘Facing the dam: indigenous territories and hydroelectric power in Brazil’. His work focuses on how Amerindian groups conceptualise, use and play with language in their songs and in everyday life. Having conducted fieldwork among the Araweté of Eastern Amazonia, Dr Heurich’s paper discussed the changing nature of conceptualisations of death and offerings to the deceased since the introduction of commodities previously absent from Araweté society. These shifting perceptions and relations were explored against the background of the PAC (Programa de Aceleração do Crescimento) Belo Monte project, which decisively affected the lives of these Amerindian groups.

Antonia Walford, research and teaching fellow at University College London and the University of Copenhagen, presented a paper titled ’The planetary skin and AI for earth: Brazil and the datafication of the environment’. Her research explores the effects of technology, particularly digital data practices, on social and cultural life, with a focus on environmental science. Her doctoral fieldwork was with climate scientists and technicians in the Brazilian Amazon, looking at the contested social and material practices of scientific digitisation of the Amazon forest. In September 2018, she will take up a lectureship in Digital Anthropology at UCL. Dr Walford’s presentation at the TORCH workshop focused on the exploration of data frontiers and science’s relation to territorial power dynamics. She discussed environmental data infrastructures as political technologies of territory and reflected upon them as simultaneously territorial and as forming a territory in and of themselves.

Andreza de Souza Santos, Postdoctoral Research Associate for the Urban Transformations portfolio at COMPAS, University of Oxford, gave a paper titled ‘Ethnographic perspectives on politics: a discussion about political indignation in private and public realms’. Her work focuses on urban ethnography, incorporating themes of cultural heritage, housing, infrastructure, participatory city planning, social memory and migration. From 1st September 2018, Dr Santos will be appointed Departmental Lecturer in the Latin American Centre, at the University of Oxford, where she will also be the Director of the Brazilian Studies Programme. At the TORCH workshop on Contemporary Brazil, Dr Souza analysed the shifting perceptions of the city of Ouro Preto, in Minas Gerais, from the point of view of the inhabitants’ own position within it. Focusing on the interplay between conceptions of permanence and temporality, as well as the centrality of notions of proximity and trust amongst residents, she discussed their role in shaping political participation and public expression of discontent.

TORCH Global South Visiting Professor, Marcio Goldman, closed the workshop’s presentations with an engaging paper titled ‘Beyond identity: anti-syncretisms and counter-miscegenations in Brazil’. One of the leading voices in Brazilian anthropology and Professor in Social Anthropology at the Postgraduate Program in Social Anthropology, at the Museu Nacional, in Rio de Janeiro, Marcio Goldman explores, in his work, diverse aspects of Brazilian culture and society. Initially focusing on the ritual construction of the person in Afro-Brazilian religions, he then worked on the history of anthropological thought, having published the book Reason and Diference. Affectivity, Rationality and Relativism in the Thought of Lévy-Bruhl. His next work focused on the anthropology of politics, and he published the book Como Funciona a Democracia: Uma Teoria Etnográfica da Política (2006). It has been translated into English as How Democracy Works: An Ethnographic Theory of Politics (2013). Most recently, he has been back to the field of Afro-Brazilian studies researching the cosmopolitics of Afro-Brazilian religions in a candomblé terreiro in the city of Ilhéus, in the south of Bahia, with a complementary focus on the local knowledges about what he has been calling ‘counter-miscegenations’ and ‘anti-syncretisms’. A book on this subject is in preparation. In his paper at the TORCH workshop on Contemporary Brazil, Professor Goldman discussed the plurality and creativity of identity conception within a theory of variation, movement, and transformation. He analysed these modulations of diversity showing how encounters do not necessarily abolish difference, but can, in certain contexts, combine and, in others, remain distinct. 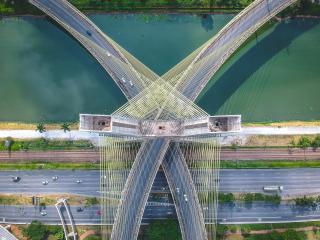