“Can you see anything?”

And so begins one of archaeology’s most famous stories. On the 26th November 1922 Howard Carter and Lord Carnarvon looked into the tomb of Tutankhamun for the first time; having been sealed for around three thousand years this small tomb remains the only ancient Egyptian royal burial to be found intact in the Valley of the Kings. For the next eight years, Carter and his team carefully removed over five thousand objects from the tomb, meticulously documented them, conserved them and transported them by train and boat to the Cairo Museum.

The Griffith Institute Archive here at the University of Oxford is now the custodian of thousands of documents made during the excavation which, since 1995, have been gradually placed online along with transcriptions and search facilities to allow researchers from all levels of academia and the general public alike access to this treasure trove of documentation from all corners of the globe. But with so many excavation-related documents (in excess of 15,000 webpages), we have often longed for more intuitive access that would make items easier to find and connections made more readily. With the centenary of the discovery only a few years away it seemed like the perfect opportunity to start this ambitious project, but without the necessary resources we were beginning to worry that a website revamp would merely consist of updating scans and changing the font!

A fraction of the excavation documentation produced during

Then, with almost perfect timing, along came the Humanities Division Creative Industries workshops at Torch. Through these workshops and a one to one facilitator-led session, we were able to reach out to potential creative industries collaborators and meet with them face to face, discussing various possibilities and projects, akin to industry ‘speed dating’, finally finding our match with the augmented reality company Arcade Ltd. We were then supported through the seed fund application process and were incredibly pleased to be awarded a grant to take the next step. To date, we‘ve had a couple of incredibly exciting and constructive meetings, with Arcade helping us to hone our ideas and identify a potential platform through which the general public and researchers will be able to interact with the discovery documentation through immersive technology. Thanks to Torch, we’re one step closer to rediscovering the tomb of Tutankhamun with all its wonderful things. 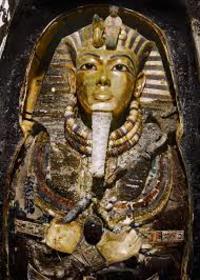 gold mask in situ on the mummy of the