To celebrate World Poetry Day we caught up with Philip Bullock and Alexandra Lloyd, who lead the Oxford Song Network at TORCH. They explore how performance and song bring poetry alive and share some of their favourite poems.

- What is the purpose and remit of the network?

PB: I think we say something on our website about the network – that it ‘explores the interaction of music and words in the nineteenth- and twentieth-century European song tradition’. But that’s incredibly complicated, as you might imagine. Trying to find a common language that brings together musicologists, linguists, historians and performers is one of the major challenges, and we’ve brought together a wide range of scholars from different fields in order to try to establish some common research questions and discuss how we each think about song (we’ve even pushed our period boundaries by talking to some classicists too). We’ve also experimented with a number of different formats. We’ve had some more formal, conference-style events, often linked with the Oxford Lieder Festival, where people talk about their own research in depth. But we’ve also had smaller discussion groups in which we hear each other’s work in progress, and that’s a great opportunity to open things up for further discussion. And this term, we’ve held a couple of workshops with current Oxford students and leading experts from outside the university – Helen Abbott from Sheffield, and Natasha Loges from the Royal College of Music – in order to explore the relationship, and sometimes even the tension, between poetry and music in song, to ask how we might translate song lyrics into English, and to explore what kind of knowledge and experience singers and pianists need to have in order to put across the meaning of a song to an audience that might not necessarily understand the language in which a song is sung. A rather selfish reason for putting the network together was to get some feedback on a book I’m currently trying to write on Russian song, and I must say that I’ve always come away from every event buzzing with new ideas and angles to explore in my writing.

- What do you think of the way poetry is approached in schools and in the media? How would you change this?

PB: I think poetry can sometimes seem terribly formidable, and people think that studying it often involves learning lots about the complex meanings of words and all the hidden references and technical tricks that poets use to work their magic. That’s all true, and it’s an important feature of how I teach poetry to my own students. But I sometimes think we forget the physical, embodied side of poetry – words that are spoken, or sung by a living, breathing human being. We’ve rather lost the habit of memorising and reciting poetry (at least in the UK – Russians still do it with a passion), and with that, we’ve lost sight of poetry as a kind of performance, where sounds and sensations are as important in creating a relationship with the audience as the words on the page are. One of the exciting things about song is that it can bring poetry alive in the most intense way imaginable – we’re not just hearing a particular composer’s take on a poem, but a performer’s entire involvement with both the words and the music.

AL: I’d second what Philip writes about the embodied side of poetry. The expressiveness of sounds, and the feelings we encounter – emotional, but actually also physical – are part of the experience it’s easy to overlook sometimes. It’s always a wonderful moment when students, for example, discover enjambment (the continuation of a sentence beyond the end of the line) – the breathlessness experienced by the reader roots the poetry in something beyond the intellectual. Poems are not, and should not be taught as, collections of printed words on the page, any more than music is. For instance, listening to different composers’ settings of one poem can reveal so much about the original text by drawing attention to its different parts.

-What would you like people to take away from World Poetry Day?

PB: Thinking just about music for a moment, I’d like to suggest that song represents a wonderful form of imaginary travel. Listening to a Schubert setting of Goethe, a Glinka setting of Pushkin, or a Debussy setting of Baudelaire allows us to imagine not just very different historical periods, but totally new linguistic and cultural worlds. As a linguist, I worry that not enough people study foreign languages, whether as part of the school and university curriculum, or simply for pleasure and enjoyment. But it’s not true that we live in a monolingual culture – we’re surrounded by other languages, some of them spoken by people who’ve moved here and brought their culture with them, and others that have been imported in the form of subtitled films, surtitled operas or bilingual programmes for song recitals. My first encounter with German was falling in love with Schumann Lieder as a melancholy teenager, and I first began to learn Russian by deciphering the texts of the poems that Shostakovich set to music – they were very much the passport to my later life as a linguist and every bit as important as the fat novels I also love reading.

AL: I'd like to emphasise the idea that poetry is ubiquitous, particularly in music. When David Bowie died in January I watched the video of his final single ‘Lazarus’, released just a few days earlier. I was struck immediately by echoes of Heinrich Heine’s poem ‘Wie langsam kriechet sie dahin / Die Zeit, die schauderhafte Schnecke!’ (‘How slowly she creeps along, time, the loathsome snail’) from his cycle ‘Zum Lazarus'. As with Bowie's character in the video, Heine spent the last eight years of his life bedridden, suffering from paralysis and confined to what he called his 'mattress grave'. These two verses about mortality - one from the mid-19th century, one from the early 21st -  give us perhaps a sense of the connectedness of the human condition and the role of the arts and poetic expression in confronting that.

-Would you like to suggest a poem for our readers to read today?

PB: I’ve recently discovered Japan, and although I can’t speak a word of the language, I’m really enjoying discovering its literature in translation. Basho’s frog haiku is terribly clever – and has been obsessively translated in an attempt to fathom its many secrets. It’s also about sound, so ideal for someone like me, who’s interested in poetry’s musicality.

AL: I'm also part of the team that runs the Oxford German Network. Our national competition last year was on the theme of poetry and our website has a feature with lots of suggestions for reading: http://www.ogn.ox.ac.uk/pop-poesie

For today, I'd suggest reading Lewis Carroll's poem 'Jabberwocky' - it's such a wonderful example of how 'nonsense' has meaning through sound and performance. There are also plenty of translations of it online - from the 'Jammerwoch' to 'Siaberwoci' to 'El Dragobán'... 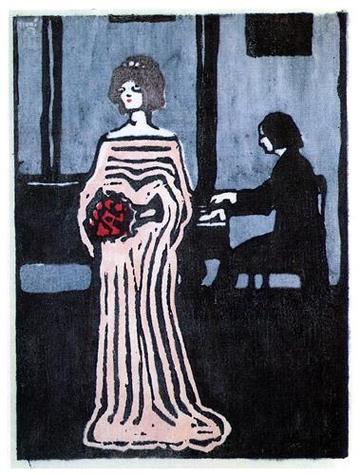