Disney's Coco and the Queer Saint

George Haggett holds a BA in music from St Hugh’s College, Oxford and has recently completed a Master’s degree in musicology at Royal Holloway, University of London. He is currently undertaking a vocational discernment year, working as a chaplaincy assistant at King’s College, University of London. In this blog post, George approaches Disney’s 2017 film ‘Coco’ as a queer hagiography, exploring the ways in which it both moralises and sexualises music.

Disney’s 2017 film Coco is a children’s film about music and its degeneracy. The young Mexican protagonist Miguel is born into a family which has banned music for generations after his great-great-grandmother was left by her tearaway musician husband to raise her daughter alone. Coco’s central tension is that Miguel is himself a closeted musician. Early in the film, we see him hiding in an attic,  playing along with his long-dead idol, Ernesto De la Cruz on a makeshift guitar. This episode is an example of what musicologists Jason Stanyek and Benjamin Piekut would call an ‘intermundane duet’.[i] Just as we’ve witnessed Natalie Cole singing ‘Unforgettable’ with her dead father Nat King Cole through video projection, here Miguel’s eyes glow in the grainy light of his television screen, and gazing reverently at De la Cruz, he breathes, ‘when he played music, he made people fall in love with him’.

We often desire to be with the dead, and certain technologies make that freakishly possible—at Coachella in 2012, Snoop Dogg performed alongside a holographic Tupac. In such musical exchanges, we are intimate with the departed loved one in such a way that we encounter their bodies once more: music perceived as ephemeral, invisible, and untouchable was nonetheless once produced by the motions of joints and vibrations of vocal chords, which enter into our ears in musical communion. When Miguel copies De la Cruz’s riff, moving his fingers across his fretboard in reverent imitation, he channels the dead musician through his own body. Miguel’s performance is an embodied union with a long since dead idol.

Miguel’s pseudo-duet with De la Cruz is only the beginning of his interactions with the dead, however. When he tries to steal a guitar from De la Cruz’s crypt to take part in his town’s Day of the Dead talent show, a curse is put upon Miguel: his body becomes porous and invisible, and he must cross over to the Land of the Dead. There, he learns that his only hope of undoing the curse is to gain his family’s blessing to return home, which his great-great-grandmother offers only with the condition that he never play music again. Suspecting De la Cruz of being his infamous great-great-grandfather, Miguel’s quest is to find him, and solicit his blessing instead.

In Coco’s Land of the Dead, only those whose photographs are displayed on an ofrenda may visit the land of the living. An ofrenda is a crucial part of The Day of the Dead’s hybrid Aztec-Catholic observance, involving commemorative table laid with photographs, crucifixes, incense, and food offerings both to bless the dead and invite them back into the land of the living. In Coco, the dead do not only rely on the commemorative object of the ofrenda photograph to cross out of purgatory. Rather, if the dead are forgotten on earth, they fade away. We bear witness to this ‘second death’ as Héctor, Miguel’s sidekick, (eventually revealed to be his true great-great-grandfather) leads him through backwaters populated by the Land of the Dead’s family-less outcasts. ‘These people are all your family?’, Miguel asks. ‘Ah, in a way’, Héctor replies, introducing him to the elderly musician Chicharron. To the strains of a lewd little folksong, Chicharron fades into light and disappears, forgotten and therefore unattached once and for all from the world of flesh. In Coco, the very existence of the dead hinges on love, and in the purgatory temporality of their potentially eternal afterlives, to be forgotten is as well as to have never existed at all.

De la Cruz’s biggest hit, Remember Me, is Coco’s constant musical refrain, and the fervour that it elicits from Miguel is musical, emblematising song as a way of remembering which (for him) is totally separate from the family. But his fervour also has the ring of ‘musical’ in the sense of the twentieth-century euphemism invoked by Wayne Koestenbaum in Queering the Pitch:

‘says a chorister friend, an endearingly femme bass: “The two coming-outs rhyme. ‘I’m musical’ hurts—and heals—as much as ‘I’m queer’.” With delight and horror I introduce myself as a musician, an identity (an inkling, a structure) I wear next to my skin [….] “I’m a musician” seems as rude, queer, and necessary as “Blow me”’.[ii]

While Coco is not an explicitly queer film, music’s flatly anti-family resonances in Miguel’s world lead him to talk like one who is closeted: ‘I get this feeling like we’re connected somehow’, he says of De la Cruz, adding, ‘I can’t really talk about any of this at home’. A particularly painful episode which prompts him to run away from home (and into De La Cruz’s crypt) sees his family discovering his secret upper-room shrine and the subsequent destruction of his beloved guitar. It is at this point that he first reveals that he is ‘musical’, and does so in terms of identity, insisting, ‘the music isn’t just in me, it is me’, to which the response is, ‘this is no future for my son’.

The queer coding of De la Cruz extends beyond his musicality, or Miguel’s identification with him. The hyper-masculine swell of his chest in his elaborate suits is paired with tight trousers over slender hips. De la Cruz is a camp idol. The campness of Disney’s villains, from Aladdin’s Jafar to The Little Mermaid’s Ursula, is well documented; at one point he even appears with a couple of chihuahuas, not to mention the (extremely fun) cameo appearance of Frida Kahlo at his show. What’s more, the parallels between Coco and camp-cultural cornerstone The Wizard of Oz are almost too numerous to mention: a yellow-brick road of marigold petals, a scarecrow-like chaperone, an Emerald City of the Dead, and above all the quest for the powerful, mysterious, masculine figure overshadowing the refrain, ‘there’s no place like home’. Whether or not Miguel would hypothetically grow up to be a ‘friend of Dorothy’, for the purposes of this film he is Dorothy.

But De la Cruz is no wizard. Coco’s iconography surrounding him in the living world, from Miguel’s candlelit ofrenda to film footage of him flying through the sky wearing a cassock, serve in a sense to sanctify him, like some sort of patron saint of the guitar. Miguel’s town that so reveres him is named Santa Cecilia, the patron saint of music herself, and De la Cruz’s name even translates as ‘of the cross’. In Sanctity and Pornography in Medieval Culture, Bill Burgwinkle and Cary Howie write of the saint in the same breath as the porn star, both being distinctively ‘beloved bodies’ that ‘continue to shock and inspire devotion’.[iii] Gay communities are no strangers to the language of sanctity. Indeed, we have ‘gay icons’: theorist David M. Halperin wrote of ‘Saint Foucault’, and artist Scott Marsh Painted a mural to ‘Saint George’ [Michael].[iv] Both the saintly and the erotic, write Burgwinkle and Howie, demand ‘hyperbolic engagements with the body and its possibilities’ and in turn ‘demand a bodily […] response’.[v] The experience of these communions elicits an ecstasy which demands that we are ‘always emerging, always on the verge of becoming more than [we] are’. To be ‘on the verge’ is ‘to be constituted through processes of exchange and reciprocity, hesitation and suspense, through which the worldly and the otherworldly, the body and what lies beyond it, articulate one another’.[vi]

Miguel is ‘on the verge’ in myriad ways: in his coming-out as ‘musical’, his pre-adolescent condition, and the liminal position he occupies between life and death. His bones are visible through ghostly fingertips, and he disguises his face with makeup, which is climactically washed away to reveal his flesh at De la Cruz’s party. As one of Miguel’s relatives exclaims, ‘he doesn’t seem entirely dead, he’s not quite alive either’. But to be ‘on the verge’ does not only mean to be liminal, but more emergently to be and to become more. It is deeply concerned both with solidifying yourself and turning towards transcendence because it hinges around desire: reaching out and being touched. It is a living condition, and not one that the memorialised departed can partake of any longer. The dead are not flesh and can no longer ‘come into themselves’, but inCoco rearrange their bones in slapstick fashion, and eventually fade away. Embracing the verge, then, there is a crucial a sense in which Miguel could not be further from degeneracy, is in fact ‘a creative’, and operates according to the rules of musicality rather than the family. Both are deeply concerned with communion, with being together, but where one seeks a stable lineage from generation to generation, the other ruptures the mundane with intimacy, eroticism, and the desire to dance.

Manifest in the film’s happy ending is the reassurance that the two are not inherently contradictory, and perhaps even that we parse them at our peril. The superabundance of love which flows through Coco is (rightly) sacred, and this film glows with loving familial embraces. But erotic love is still its unspoken outcast; De La Cruz is unveiled as a murderous fraud who murdered Héctor and passed his songs off as his own, and Héctor only redeems music by securing his place on the family’s ofrenda via a final duet between Miguel and his great-grandmother. Music itself is redeemed as a wholesome, family-friendly activity which brings together flesh-and-blood relatives, but maligns the degenerate outsider who has no offspring, copies his songs, and (his graffitied grave suggests) deserves to be forgotten. When Wayne Koestenbaum writes that ‘with delight and horror I introduce myself as a musician, an identity (an inkling, a structure) I wear next to my skin’, the horror is the exposure of our most intimate ways, that someone might see down to our bones.[vii] But the delight is in the knowledge that music does get under our skin, is always becoming along with us because we bring it into being, and that riding ‘the verge’ in such a way is, at least while we’re still here, unforgettable. 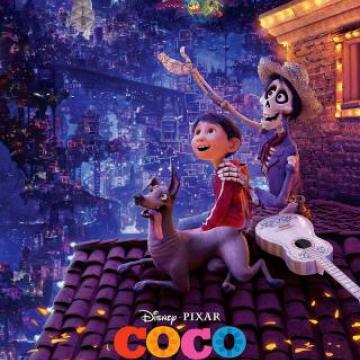