In the first out our blog posts, Classics DPhil student Mara Gold reveals details from the life of the British-North American lesbian poet Elsa Gidlow. From the beginning of her career in the early 1920s, Gidlow’s work was explicitly and unashamedly lesbian, but it is her extremely well-documented personal life that is invaluable to the queer historical record.

Born in Yorkshire in 1898, Elsa Gidlow settled in the San Francisco Bay Area in the late 1920s (via Quebec, New York and Paris). It was there that she found herself at the centre of a thriving circle of writers, artists, intellectuals, radicals and, of course, the lesbian social scene.  Described perfectly by her editor, Celeste West of Booklegger Press, Elsa was, ‘born avant garde: North American's first published writer of a lesbian poetry volume (1923); radical feminist of the "first wave;" protest-poet attacked by McCarthyites; member of San Francisco's bohemian, psychedelic, then New Age and women's spirituality circles. Elsa fought life-long against class privilege, organized religion, and sexism, while fighting for all varieties of love and beauty.’

In 1986 Gidlow released her autobiography, Elsa, I Come With My Songs: The Autobiography of Elsa Gidlow. It is considered the first explicitly lesbian autobiography to have been published under the author’s own name. Her autobiography illuminates how lesbian relationships and friendships were forged during a period when secrecy was essential to their safety and existence. Gidlow also mused extensively on gender, holding the belief that ‘the feminine contains the balance between feminine-masculine’ (Albright to Gidlow, 1982).

Despite her fascinating life and legacy, Gidlow’s portrayals of lesbian love are all too often forgotten in popular lesbian culture, which still heavily emphasises ‘celebrity lesbians’ such as Radclyffe Hall (with whom Gidlow eventually became acquainted).

Interestingly, there appears to be a sense of professional jealousy towards Hall prior to their first meeting. Gidlow commented that The Well of Loneliness ‘[…] reads very like autobiography. The heroine of the story is a writer and the description of her person accords with the photograph of the author that we have seen. The book is very well done, though rather sentimental in spots and lacking in perspective, also occasionally bitter. The book rather fails as a work of art because it is frankly propaganda – a plea for a place in the sun for inverts, the right to live and love openly’ (Gidlow to Anderson, Oct. 1 1928).

A lifetime of lesbian and feline love

Gidlow took the first of her many female lovers at the age of 18. However, Gidlow eventually embarked on an informal marriage with a Scottish golfer who was sixteen years her senior, known professionally as V. Henry Anderson and as Tommy to friends. Gidlow and Anderson were together for thirteen years until Tommy’s death in 1935. To the great benefit of the historic record, the couple were often apart, so had to rely on letter writing to communicate. They often wrote to each other in the name of their respective cats, Purr-cy and Panther, exhibiting a touching tenderness that is often absent from the high drama and desperation of lesbian life writing.

After Tommy’s death, Gidlow had many more lovers…and many more cats. In fact, there is an entire folder in her papers at the GLBT Historical Society Archives in San Francisco which is jam-packed with cat pictures and records, indicating that they often took centre-stage at social gatherings.

The enduring influence of Sappho

Her letters, journals and autobiography, held at the archive, also contains many clues about relationships and liaisons. These included an attachment with a woman in her twenties, Gretchen Muller, when she herself was in her seventies. It appears that their relationship was both amorous and edifying (at least on the part of the younger woman), in much the same way that the Greek poet (and popular lesbian icon) Sappho’s relationships with her so-called pupils have often been viewed, particularly during Gidlow’s lifetime.

Gidlow saw herself as a modern-day Sappho and many of her associates addressed her as such in personal letters, including the gay Canadian journalist Roswell George Mills and her first love, the pianist Marguerite Desmarais. To mark the occasion of her eightieth birthday, Gidlow published a volume of lesbian poetry entitled Sapphic Songs: Eighteen to Eighty, The Love Poetry of Elsa Gidlow, celebrating a lifetime of lesbian love. This would be her last publication aside from her autobiography, and considering the title and its content, a most fitting way to end her career and her life as the twentieth century Sappho.

E. Gidlow, Elsa, I Come With My Songs: The Autobiography of Elsa Gidlow, San Francisco, 1982 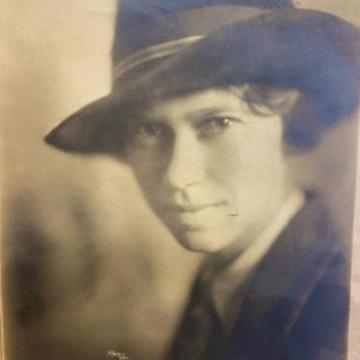