'I wish there was a world for us': the search for utopic recognition in queer comics

Roan Runge recently completed a BA in English Language and Literature at Exeter College, University of Oxford and is currently pursuing an MLitt in Celtic Studies at the University of Glasgow. Their undergraduate dissertation focused on queer women, trans women, and lesbians in science-fiction and fantasy comics. In this blog post, Roan considers how science fiction and fantasy comics have a particular potential to offer a sense of futurity to trans and/or queer readers through ‘recognition’ or ‘utopic glimpses’. Roan’s blog post is adapted from the paper they delivered at the Queer Studies Network’s undergraduate symposium held in May 2018.

The closing line of Porpentine Heartscape’s Psycho Nymph Exile—a work she terms ‘a multimedia survival kit for another dimension’–is ‘I wish there was a world for us’.[i] This plea calls across dimensions from the trans women who are the book’s protagonists to those in this world working to build spaces for trans women to inhabit. Comics, like Psycho Nymph Exile, incorporates multiple media; the visual nature of comics alongside the tension between its artistic elements (written words and pictures) creates more space for ‘recognition’, space for queer and/or trans characters to mutually search for a queer utopia.

We find this idea of ‘recognition’ in Alison Bechdel’s comic memoir Fun Home. In one scene, a young Alison sees a woman in a collared shirt, learning for the first time that women can wear men’s clothes, men’s haircuts. Alison, who ‘recognized her with a surge of joy’, keeps the image of the woman in the luncheonette to ‘sustain’ her as she struggles with her sexuality over the next several years.[ii] However, this panel also highlights the potential dangers of recognition. As a visual medium, comics are already equipped to signal to ‘social formations in which visibility itself constitutes much of the violence’.[iii] In the next panel, Alison’s father says, ‘you don’t want to look like her, do you?’ to which the only possible answer for a vulnerable child can be ‘no’. At once, Alison is able to recognize something of herself in the woman in the luncheonette, but that recognition, along with the woman herself, is harshly judged by Alison’s father. Comics, reflected in this scene, create a space for recognition, even though this space can be troubled, precarious, and even dangerous.

The visual nature of the comics form lends itself very well to a sense of ‘looking for’ community, and the possibility of readers seeing a ‘glimpse of utopia’, in José Muñoz’s words, or a ‘glimpse of plurality’, in Porpentine Heartscape’s.[iv] When it comes to recognition, plurality and utopia are inextricably linked: the utopia Muñoz describes is the knowledge that one is not alone in one’s queerness, or transness, or gayness, or all of these things.

Comics have several other qualities with the potential to create positive spaces of recognition between trans and/or queer readers and trans and/or queer characters. There are two strands of tension inherent in the comics form that lend themselves particularly well to this recognition and glimpsing. The first is that comics combines two methods of relaying information—pictorial and verbal. Ideally, in a comic, words and images are both necessary, both convey information that the reader needs to understand the story. The second tension is the illusion of time presented in space. In comics, the same time as we would count it on a clock can be shown in one panel, stretched over many, or be hidden away in the space between panels called the gutter. This allows for the manipulation of time—an important tool for the artist trying to convey utopia through glimpsing.

Through and around these tensions runs what Thierry Groensteen calls ‘braiding’: the ‘remarkable resurgence of an iconic motif.’[v] Braiding, in part, helps readers identify important themes across a comic. The repeated depiction of images in a comic also helps to highlight the phenomenon in comics in which every panel, though in an order specifically designed by the comics creator, also has the potential to be in relationship with every other panel. In this way, panels, pages, even issues of any comic get a chance to glimpse each other, even as the readers may see glimpses through them.

This kind of recognition has the ability to providing a sense of joy and community: Muñoz discusses how a ‘glimpse of utopia’ in seeing other LGBTQ+ people reveals ‘the existence of a queer world’.[vi] Strides are being made in comics made by trans, gay, and queer creators, especially in webcomics. The possibilities of the internet give both readers and creators more options for stories that can provide glimpses of utopia to LGBTQ+ readers. These continuing works show that ‘queerness is not yet here but approaches like a crashing wave of potentiality’, as Muñoz puts it, with the speculative fiction genre and the comics form as a herald of its coming, providing a site in which to imagine utopia.[vii] The statement ‘I wish there was a world for us’ contains within itself the longing for a future that leads to the creation of these works—both the plea of the characters, the plea of the author, and the plea of the reader. It demands a space for queer futurity.

Sedgwick, Eve Kosofsky. ‘Paranoid Reading and Reparative Reading; or, You’re So Paranoid, You Probably Think This Introduction Is about You’ in Novel Gazing: Queer Readings in Fiction, ed by Eve Kosofsky Sedgwick (Durham: Duke UP, 1997), pp. 1-39.

On a Sunbeam by Tillie Walden http://www.onasunbeam.com/

Beyond vol. I and II published by Beyond Press http://www.beyondanthology.com/

The Sandman by Neil Gaiman and others (New York: Vertigo, published serially 1989-1996)

On Loving Women by Diane Obomsawin (Montreal: Drawn and Quarterly, 2014) 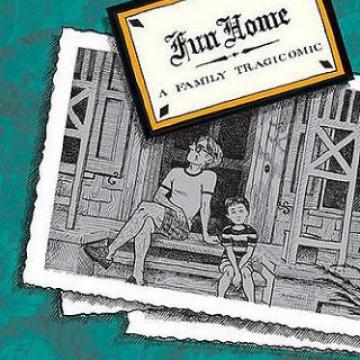