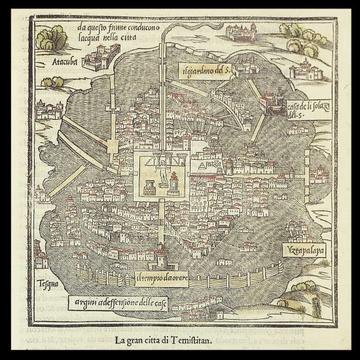 Benedetto Bordone’s Libro de tutte l’isole del mondo, a geographical encyclopedia of islands, was printed in Venice in 1528. The book pairs maps of the islands of the world with text describing their geography, history, mythology, and toponymy. The book stretches from the islands of the Atlantic, Mediterranean, and then finally the Indian Ocean and far east. But perhaps the most remarkable feature of Bordone’s Libro is the direct visual comparison posited by the likeness between the island-city of Tenochtitlan, the capital of the Aztec empire in Mexico, and the metropolitan archipelago of Venice. Bordone’s map of Tenochtitlan is derived from a very similar image included in a 1524 Latin edition of Cortès’ letters; this 1524 printed map was probably based, through a series of copies, on a manuscript map that Cortès included in a Charles V.

Though these maps are not consecutive in the Libro, there are striking formal similarities between the two: both depict a roughly circular, architecturally sophisticated urban center, sliced by canals and roads, seemingly floating in the midst of a wide lagoon filled with smaller, urban islands, and all surrounded by thin arcs of idyllic countryside. The small islands in the Venetian lagoon and Mexican lake, the parallel between the compass lines in the Venetian map and the hydraulic infrastructure in the Tenochtitlan map spiraling from the center, the square public spaces in each, especially the Arsenal in Venice, even the snaking of a primary canal through the cities, seem to speak to the spatial similarities between the metropoles.

Bordone and his Venetian readers would have turned to these images of Tenochtitlan and Venice looking for specific kinds of local information. These maps set out to examine the detail of the urban spaces of Tenochtitlan and Venice from above, just close enough to perceive the intricacies of the cities, just far enough to picture their totality. With these vistas of metropoles in the Old and New Worlds, Bordone could perceive particular kinds of local information through global comparison: that concerning hydraulic infrastructure and engineering in the cities. The complex system of aqueducts bringing fresh water into Tenochtitlan is amongst the most notable features of the map, as well as the dam system in the lower part of the lake; one of these rivers is even noted as such in the top left-hand corner of the map. Similarly in Venice, the rivers emptying into the lagoon and the permeability of the lagoon through openings in the Lido emphasize the crucial flows of fresh water and circulation of tidal water in the lagoon space. Bordone even depicts lush forests, reeds, and gardens around the circumference of each, signaling the ability of each terraferma to provide food for the urban population.

These details of hydraulics of Tenochtitlan were becoming ever more important and interesting in the middle of the sixteenth century to Venetian readers, because the lagoon was silting up; the flooding of the city was becoming more frequent; the flooding raised public health concerns about disease; and especially and most relevantly for our project, Venice was experiencing the pressure of increased immigration to the city, which raised concerns especially about the provisioning of food and fresh water. Much of this focused on the ecological, economic, cultural relationships between the city/its lagoon/its surrounding countryside. We might compare Bordone’s maps with a later map of the lagoon made by Cristoforo Sabbadino, a Venetian engineer who was attempting to resolve the silting-up of the lagoon later in the sixteenth century. Sabbadino’s map reveals the ways in which Bordone could be seen to be presaging a visual vocabulary of hydraulic infrastructure and the environmental relationship between island metropole and countryside. Bordone sought this visual vocabulary, and especially information about environmental technology, from the depiction of the local space of the city of Tenochtitlan.

Another example of this from a letter by Alvise Cornaro, a Paduan contemporary of Sabbadino. Cornaro was a true ‘Renaissance man’, and wrote treatises about a variety of subjects including the lagoon environment, classical architecture and theater, and personal health and preventative medicine. In a letter to a natural philosopher, Cornaro argued that the Venetian state should engineer banks encircling the city modeled on the hydrography of the lake of Tenochtitlan in the New World. In this modeling, he was especially interested in this relationship between the lagoon and the agricultural lands surrounding it. For sixteenth-century Venetians, Tenochtitlan was not only a New World Venice, but Venice itself could become an Old World Tenochtitlan: they would imitate the Aztec solutions to living in a watery place, their plans to live harmoniously within their ecosystem of island, lake, and countryside.

Relevantly for Storming Utopia, part of Alvise Cornaro’s plan to re-engineer the lagoon also included building a theater. He wanted to build an artificial island amongst the island archipelago, and build a classical theater there, where they would stage bear fights, reenact ancient battles, even flood the theater and stage naval battles. In a letter of 1560, Cornaro wrote of the theater:

And this edifice will be easily seen when one is standing in the Piazza San Marco, and it will be a very beautiful view, and an edifice of a type that is no longer found in any other City, for where they were, they have fallen apart; even thus ruined they are beautiful to look at, and make one judge that the city was once big, and beautiful. And if, thus ruined, they are a sign of greatness, and beauty. What then will one think upon seeing it made, and made new again, when the others have been ruined? […] Oh how admirably virtuous is thought, which makes us see things before they are made, and thinking of it I will enjoy it! Now, I see that what remains of my life will be completely full of beautiful thoughts.

This passage from Cornaro’s letter is fascinating because we can see him slipping between ruin and the new, signs of past glory and the power of imagination, physical buildings and beautiful thoughts. Imagining Venice as Tenochtitlan and the possibilities of theater in their urban archipelago, writing dozens of fantastical letters to unsympathetic Venetian engineers, these imaginative and even utopian ideas nourished and sustained Cornaro at a time of deep environmental and social crisis in Venice and on its terraferma. Bordone and Cornaro’s utopian dreams of the New World can point us towards the possibilities of radical imagination at times when our own islands are in crisis.