'Losing and finding identities in death': running the epitaphs table at Lost late

In this post, Hanna and Annie reveal the journeys they took when creating their Being Human Festival epitaphs table and how audiences responded to thinking about their own deaths and legacies.

Hanna: When I was asked to contribute an activity table to the ‘Lost late: night at the museums’ Being Human event run by TORCH, the Pitt Rivers Museum and Oxford University Museum of Natural History, I was both wildly excited and vastly stymied. My research is on war cemeteries; it is full of death and grief. How was I supposed to come up with something that was a) not too depressing, b) interactive, c) appropriate for all ages, and d) not flippant or otherwise tonally inappropriate? The latter was particularly important because I work on the First World War, a conflict which still holds a deeply emotional place in collective and individual memory.

I started thinking about what element of my research most encapsulated the idea of what it means to ‘be human’, and epitaphs seemed like a natural fit. Death, and wanting to be remembered, are concepts so universal that absolutely everyone has some kind of connection to them. I decided that capitalising on the relatability of those broader themes would be the key to creating something interactive.

So, that’s the story of how we ended up in the Pitt Rivers Museum during ‘Lost late’, with dozens of examples of types of epitaphs in hand, asking people to think about how they wanted to be remembered. We used headstone photos from my research as category prompts, such as ‘do you want to be remembered with an epitaph…. about those you leave behind? about an achievement you are proud of? about an ideal you believe in?’ People were given small pieces of paper and the opportunity to write their own. With their consent, these were then added to a large backdrop, forming a collective picture as the night went on of the similarities between, and differences within, people’s instinctive desire to be remembered.

My research only covers 1918-1938 rather than contemporary memory, but nevertheless the context it has given me was inextricably influencing how I interacted with members of the public who came up to us during the event. That’s why it was particularly interesting to have Annie as my colleague at our table- specialising in a completely different research field, she was there very kindly to help me out due to the large volume of visitors expected. To her immense credit, she jumped right in and was engaging our visitors with equal confidence to me. I’ll turn it over to her now, to share her thoughts of the experience.

Annie: When I volunteered to help with the ‘Lost late’ Being Human event at the Pitt Rivers, I did so with the spirit of friendship, as well as a desire to learn more about the ways scholars can work with museums and share their research interests with a wider community.

At first glance, Hanna’s work on the material history of First World War remembrance seems disconnected from my own research in literature and performance by African-descended authors and artists in the Americas. However, my subject areas, which are inextricably tied to historical enslavement, colonialism, and ongoing racial oppression, lead me to spend considerable time reckoning with the weighty topics of memory, grief, and death. What is more, the question of how a person or community wants to be remembered is particularly poignant when considering literature of the Black Americas. The same events that created and maintained the New World African diaspora also systematically erased and denigrated the artistic, intellectual, and spiritual legacy of African-descended people. In light of all of this, I can certainly relate to Hanna’s desire to communicate the meaning and content of her research without coming off as either too depressing or too flippant.

Because I can relate to these concerns, I am so grateful to have had the opportunity to observe Hanna throughout the Being Human event. It was a delight to watch her use her experiences with museum studies, teaching, and community outreach to create an activity that deftly made these topics both accessible and resonant for the heterogeneous crowd of participants at the Pitt Rivers. By using the pictures of First World War epitaphs as anchoring materials, we were able to immediately establish relatable and common examples of our table’s themes without being too overwhelming. That being said, I can understand why some individuals who walked up to the table knew without hesitation that this was not a topic they wanted to engage with on their Friday night outing. For those who did choose to participate, Hanna had created the activity and materials so that there was a clear focus on remembering life. As a result, we were always implicitly talking about the relationship between mortality and life, rather than considering one point at the expense of the other.

It was fascinating, poignant, and very fun to interact with the broad range of visitors, and see the different ways people choose to reflect on memory, death, and life. By the end of the night, Hanna and I were surrounded by paper epitaphs that demonstrated as much variation in tone and content as did our conversations throughout the evening.

By Hanna Smyth, DPhil student in History, and Dr Annie Castro, postdoctoral fellow in Literatures of the Black Americas 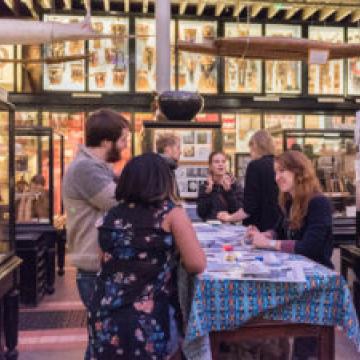