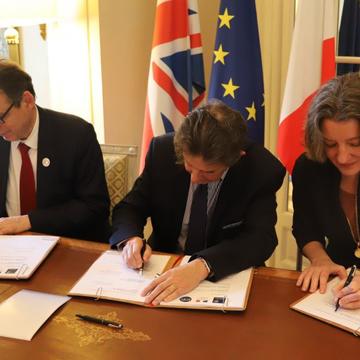 TORCH is delighted to share the news that the University of Oxford has decided to strenghten its ties with French researchers.

As the French National Centre for Scientific Research (CNRS) marks 80 years since its foundation, the University of Oxford is extending its collaboration with French researchers through the Maison Française d’Oxford.

At a ceremony held today at the French Ambassador’s residence in London, the University of Oxford, the CNRS and the French Ministry of European and Foreign Affairs (MFO’s parent organisations) co-signed an agreement facilitating the deepening of the MFO’s links with the University and the expansion of the MFO’s activities to include closer working with academics across all disciplines. The agreement will also see the University increase its representation on the Paris Committee, the body overseeing the MFO’s academic strategy.

Strengthening ties with academics across the globe is a priority for Oxford University, which has committed through its recently published Strategic Plan to expand the University’s strategic international research collaborations.

To read more about the agreement signed by the representatives of the University, click here.