The TORCH Heritage Programme brought together Historic Houses and the Faculty of History to set up the AHRC Collaborative Doctoral Award 'Populism, Permutation and Persuasion: Country House Politics after 1950'. Historic Houses represents the nation’s largest collection of independently owned historic houses and gardens. This doctoral project is supervised jointly by Professor William Whyte and Dr Oliver Cox of the University of Oxford, and Emma Robinson, who is the Director of Policy & Public Affairs at Historic Houses.

My doctoral research focuses on policy change related to privately-owned country houses in Britain since 1950. I am looking at the shifts in attitude, both within government and in wider society, that have influenced how policies affecting privately-owned heritage properties has been enacted and maintained.

Assisting – and effectively subsidising – public ownership of historic houses has been considered the most economical method of maintaining built heritage since 1950, when the Gowers Report on the future of Britain’s buildings of ‘outstanding historic or architectural interest’ was published. However, subsidising asset-rich individuals to maintain their ancestral house has not always been easy to justify politically, for either Labour or Conservative governments. In 1953, a grants scheme was established to make funds for repairs and maintenance available to guardians of heritage properties. For over twenty years, very little else changed.

In 1976 the Labour government granted conditional exemption of “heritage” properties from the new Capital Transfer Tax (now Inheritance Tax), which was intended to tax wealth and further that government’s aim to create a more equal society. The exemption of historic houses was a landmark moment for private owners, and – for some – a surprising political move from the government.

Since then, many historic houses in private ownership have flourished, alongside the rise of a “heritage industry”. When others have been threatened (with destruction, or with the dispersal of their contents) successive governments have stepped in with lump sums to support the public purchase of a swathe of country houses deemed to be nationally significant: from Calke Abbey (1985) to Wentworth Woodhouse (2016).

My research involves detailed study of the lobbying behind the scenes of these policy decisions. Although successive governments’ attitudes towards privately-owned historic houses appear to have remained static since the mid-seventies, lobbyists and interest groups have had to restate the case for tax exemptions repeatedly over the decades.

Through examining the archives of Historic Houses, and interviewing those involved in lobbying (including MPs who became self-appointed champions of heritage in parliament), I am learning how the language that we use to describe and defend historic properties has changed. The majority of Britain’s country houses have gone from being the exclusive private property of their owners, in practice and principle, to being “national heritage” under the temporary guardianship of their current custodians.

Now, lobbyists emphasise the economic value of country houses through tourism and employment, and their social value through educational programmes and community activities. These houses are asking the same questions that we engage with in Heritage Pathway sessions. How do country houses, symbolic of inherited wealth and power, gain relevance to modern audiences? How can these places bring in external ideas and technologies to benefit their visitors and local communities in a greater variety of ways? Participating in the Pathway has enabled me to meet and learn from many of the people who are developing innovative solutions to these challenges, from all areas of the heritage sector.

Elena Porter is a DPhil student in History and a Scholar on the 2020/21 Europaeum Scholars Programme, which engages academic thinking with policy-making to develop solutions to the cultural, political and societal challenges facing Europe today. She holds an MA in History of Design from the Royal College of Art and Victoria and Albert Museum, which was funded by an Oliver Ford Trust Scholarship, and a BA in History from Lincoln College, Oxford. She is currently co-organising a symposium to mark the 70th anniversary of the Gowers Report. The symposium, which will take place in June 2020 at St Anne’s College, Oxford, will reflect on the report’s legacy for the conservation and use of historic houses. For more information about 'Gowers at 70: The Fate of the Country House since 1950', and to register, please click here. 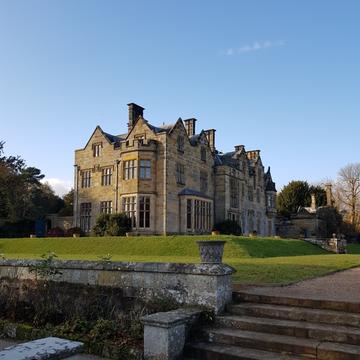 The Scotney Castle, which houses one of the archives visited during the project.