On the 12th and 13th of April the Faculty of English at Oxford played host to Queer Modernism(s) II: Intersectional Identities, a multi-disciplinary collaborative conference organised in conjunction with the Faculty of Medieval and Modern Languages, Oxford, Nottingham Trent University, and the University of Liverpool.

With the support of TORCH and the Andrew W. Mellon Foundation, Séan Richardson (Nottingham Trent University), Rio Matchett (University of Liverpool), and I were able to build on the success of the first Queer Modernism(s) conference, expanding both the scope and the size of the event. The result was a truly international conference, with over eighty delegates from across Europe, the United States, Canada, Scandinavia, Portugal, Turkey, and China coming together to exchange ideas and engage in dialogue in the fittingly modernist environs of the St Cross Building. The conversations that ensued were not merely confined to the venue itself, but continued online via #QueerModernisms and the @QueerModernism twitter feed.

A broad range of disciplines were represented at the conference, with panels on fine art, architecture, and pedagogy, a seminar on curation and queer heritage, and papers on everything from sport and modernism to the queer possibilities of the viola. Usual suspects were given fresh readings – such as Jasmine McRory’s (Queen’s University, Belfast) queer eco-feminist account of Mrs Dalloway (1925) – less well-known works by established authors were examined in detail – as in Steven Macnamara’s (University of Nottingham) paper on Radclyffe Hall’s 1932 novel, The Master of the House – and peripheral figures were discussed as serious contender’s for modernism’s queer canon – a claim ably staked for Kate O’Brien (1897-1974) by Naoise Murphy (University of Cambridge).

Particularly satisfying were the ways in which many papers combined theory and practice, featuring not only critical analyses of, but creative responses to modernist texts. So convincing was one of these practice-based responses that several delegates had to be reassured that they had not in fact just heard a hitherto unpublished poem by Gertrude Stein, but the work of one of our presenters, Seabright D. Mortimer (Independent).

One of the most intellectually bracing aspects of the conference was the willingness of delegates to question the limits of queer theory and to emphasise not only the utility, but the necessity of intersectional thought in offering a fuller account of the political, ethical, and aesthetic stakes of modernism. Time and again, delegates demonstrated that a queer account of modernist culture that does not take into consideration issues of race, colonialism, class, and disability, risked not only occluding the full plurality of modernisms that flourished during the twentieth century, but replicating many of the oppressions they critiqued.

This willingness to reflect critically on the frames within which sexuality and gender have been thought was compellingly showcased in Jana Funke’s (University of Exeter) keynote, in which she asked whether queer theory’s anti-identitarian investments might hamstring its capacity to account for the full range of ways in which people in the early twentieth century experienced, embodied, and conceptualised their queerness.

As an antidote to this presentism, Funke offered a robustly archivally grounded reappraisal of ‘inversion’ in early sexology. Focussing particularly on Havelock Ellis’s evolving work on what he termed ‘sexo-aesthetic inversion’ and ‘Eonism’, Funke highlighted the ways in which, for Ellis, the performative aspects of gender non-conformity were rooted in an innate capacity for creativity and empathy that might allow us to keep the essential and the socially constructed productively in play in our reading of modernist texts and identities.

Funke also emphasised the necessity to think critically about those relationships, structures, and identities traditionally written off as ‘merely’ heteronormative in modernist criticism, encouraging delegates to interrogate the ways in which a figure like Vita Sackville West’s ‘straight’ marriage to Harold Nicholson might have offered greater space for queerness than has hitherto been acknowledged. As Funke succinctly put it: ‘Modernism may be queer in ways we have not yet fully appreciated’.

Sandeep Pramar’s (University of Liverpool) equally provocative keynote offered an object lesson in precisely this kind of nuanced and balanced reflection. In a thoroughgoing critique of the life and work of Nancy Cunard (1896-1965), the émigré American poet, editor, and patron of the arts, Pramar highlighted the ways in which Cunard’s self-fetishising public persona – particularly her BDSM-inflected photographic self-portraits (often shot in negative with Cunard wearing ‘tribal’ jewellery) – problematically combined queer resistance to white heteropatriarchy with an unreflecting and often exploitative primitivism.

Eschewing the unreflecting Manicheanism of much contemporary criticism, in which a given author is either uncomplicatedly ‘progressive’ or irredeemably prejudiced, Pramar emphasised the ways in which Cunard’s sincere sponsorship of queer people of colour in the Negro Anthology (1934) co-existed with an investment in a semi-mythic ‘African’ identity which prevented her from recognising or responding to the complex positionality of African American artists and thinkers within the United States or the broader terrain of Anglo-American modernism.

The need for an intersectional approach to the study of modernist texts and cultures was also strongly emphasised in a range of papers which discussed the ways in which academia itself often participates in the erasures and exclusions which queer studies seeks to remedy. Jessie McLaughlin (Independent) spoke movingly about the ways in which, as a queer person of colour in a largely white heteronormative university system, they had to improvise and cobble-together a relationship with modernist texts that might not seem immediately legible or ‘legitimate’ under the traditional rubric of academic convention.

With the support of bodies such as TORCH and the Andrew W. Mellon Foundation, and through events like Queer Modernism(s) II we hope that we can ensure that space continues to be opened up within academia for people, whatever their background or identity, to come together to build a more inclusive and representative modernist canon and to reflect on and develop their critical practice.

Lloyd (Meadhbh) Houston is Hertford College – Faculty of English DPhil Scholar in Irish Literature in English at the University of Oxford. Their thesis explores Irish modernism and the politics of sexual health. Other research interests include literature and the law, and the institutional construction of obscenity. Their work has appeared in the Review of English Studies, The Library, and the Irish Studies Review, where they were awarded the 2017 British Association of Irish Studies Essay Prize. Lloyd (Meadhbh) is Postgraduate Representative and Communications Officer for the British Association for Irish Studies and convenes the University of Oxford Modern and Contemporary Literature Research Seminar. 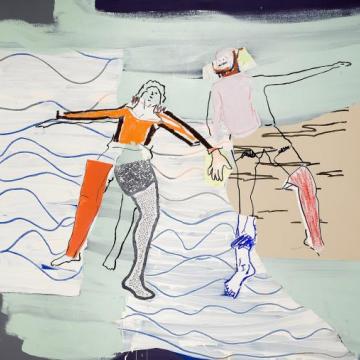