Biography/ Abstract: Dr Caroline Baylis-Green is an independent scholar and visiting lecturer at the University of Sussex. Caroline’s research primarily focusses on links between queer theory and long nineteenth-century women’s poetry and life writing. She was awarded her PhD in 2016 from Manchester Metropolitan University for her thesis ‘Queer Subjectivities, Closeting and Non-Normative Desire in Nineteenth-Century Women’s Poetry and Life Writing. In this blog post Caroline examines the poetry of Katherine Harris Bradley and Edith Emma Cooper (or Michael Field as they were collectively known), exploring the use of their pet dog as poetic muse and containing closet.

Katharine Harris Bradley (1846-1914) and Edith Emma Cooper (1862-1913) wrote together and published poetry and plays under the pseudonym Michael Field. Bradley and Cooper were aunt and niece; they embarked on a physical relationship from 1885 and lived together in Richmond from 1899. Michael Field’s poetry and extensive life writing arguably provide a unique resource for scholars interested in combining an analysis of queerness as non-normative and queerness understood in terms of same-sex sexual relations or gender non-conformity.

As Michael Field’s wider poetic oeuvre has been recovered, or rediscovered, contemporary academics have faced serious challenges in reading works that combine the uncomfortable bedfellows of worship, excessive sentiment, religion and eroticism. Much of this difficulty has centred on Field’s ‘dog-God’ poems Whym Chow: Flame of Love. This challenge has often produced ambivalent responses with Field scholars caught between acknowledging the intensity of the poems themselves and the extreme oddity that envelops them. Fin-de-Siecle researchers and Michael Field specialists Marion Thain and Ana Parejo Vadillo highlight this problematic dynamic in their introduction to the poems in their recent Broadview edition:

The question of the book’s ‘campness’ must be addressed if we are to consider Michael Field’s work seriously. Many of the poems not included here were left out because of their ludicrous sentimentality. Yet in the volume as a whole, there is a hint of self-awareness...[i]

Sentimentality represents a major challenge for twenty-first century academics working on nineteenth-century writing. The term itself is generally used in a highly pejorative way and with an accusatory tone. However, some contemporary researchers are attempting a rehabilitation of sentimental writing; exploring the changing reception of literature, which is considered emotive or too emotional, and its relationship to nineteenth-century women’s writing. Literary critic Peaches Henry outlines the landscape of negative attitudes to sentimental writing in contemporary criticism:

In certain quarters, sentimentality is still considered a poetic affliction. Dismissed and rendered ‘shameful’ in this manner, sentimentality has been relegated to literary margins. The basis for inclusion in current scholarship seems to be knowingness, or the lack of it, concerning excessive affect.

The tension between Bradley/Cooper/Field’s constant bids for critical recognition, their desire to retain a private poetics and an uncanny talent for choosing outmoded styles reaches its zenith in Whym Chow, as does the bifurcation of outwardly normative poetics and deeply subversive content. Even Frederick Roden (an academic specialist in nineteenth-century writing, religion and queer theory) who has produced some highly sensitive and complex readings of the Whym Chow poems occasionally struggles with this unresolved oddity or campness:

‘If these poems on a canine seem odd, it is nevertheless possible to find within them a complex theology of redemption and sacrifice. They also contain a sublimated lesbian sexuality. This Christian eroticism can be discovered without benefit of dog in Katharine’s volume Mystic Trees and Edith’s contemporary Poems of Adoration.’[iii]

‘Without benefit of dog’ amusingly suggests the difficulty in working with this oddity, and at the same time recognises its potential humour.Whym Chow is the queerest of Field’s works because of this combination of elegy/non-elegy, passionate worship, complex theology, eroticism and an alternative familial aesthetic, wrapped up within an awkward cloak or coat of delayed high Victorian sentiment.

Discussions of Whym Chow’s oddity also reflect a formal instability. While Whym Chow appears as a figure in Wild Honey and Various Thyme (an obvious sonnet sequence) Whym Chow: Flame of Love deconstructs sonnet form. The collection plays with ideas of the muse, poetic devotion, love and worship, to produce doubled and tripled, subject and object positions. Writing in her recent paper Sarah Kersh argues that, ‘Michael Field’s radical departure from the strict composition of the sonnet presses not only against the boundaries of the amatory poetic but also asks what counts as intimacy.’[iv] This departure from strict composition produces non-binary positions and queer spaces as the barriers between subject positions break down into a mess of bodies and fur. The doubled double of their lyric collection Long Ago becomes tripled in the trinity of Michael, Field, Chow, and Bradley, Cooper, Chow. In the poem ‘V. Trinity,’[v] Whym Chow emerges as both muse and proxy figure, melding Michael and Field together but also as a source of anxiety:

I did not love him for myself alone:

I loved him that he loved my dearest love.

In this poem Whym Chow’s presence is gifted and used as a trope of domestic and sexual ownership, highlighted by the opening line of the second stanza, ‘So I possess this creature of Love’s flame,’ (10). The text explicitly marks Chow’s place as a central mechanism of exchange between the speaking voice and its ‘dearest love.’ (2) Whym Chow acts as a go-between, as a sign of marriage, and as a poetic sign, mirroring the triple aspect of the text, ‘O symbol of our perfect union, strange/ Unconscious Bearer of Love’s interchange.’ (17-18) Whym Chow as poetic figure offers a means of expressing explicit and non-explicit touch and desire. Chow provides a dual perspective where direct erotic touch is hidden and closeted from readers; avoiding potential censure, but known and acknowledged by the authors.

In poem, IX[vi] Whym Chow acts as a comforter assuaging the grief of the poetic voice’s loss of the absent object, ‘My loved one is away from me’ (1), and is a line that repeats and develops through the stanzas as both a kind of lullaby and a rhythmic chant. In touching Chow, the poetic I seeks union with the absent beloved through a process of extension, association and substitution, ‘For her we loved in absence and together,/ My feet, thine eager paws, questioning whether/The loved One would come back to us (11-13). Whym Chow acts as a stand in and proxy for the absent loved one is sharing gaze and sighs,

My loved One is away from me.

O Chow, no more we twain

My lovely fellow-lover, hear and see

Chow acts as a kind of queer life support breathing for, and in the place of, the absent loved one.

Whym Chow emphasises fetishized touch (direct and indirect), where the touching of a pet also offers simultaneous intimacy with another who has left a trace of their touch, or touched the same places. Michael Field cleverly find a way to convert prohibited touch into appropriate touch by using a canine trope in combination with existing homoerotic aspects of Catholic theology, and iconography, for example, the Trinity. As Mark Knight and Emma Mason suggest:

‘One of the most distinctive theological ideas informing Michael Field’s poetry is the Christian doctrine of the Trinity…Field found in the Trinity a thoroughly Christian way of thinking about love and the interrelatedness of living beings (human and non-human).’[vii]

These poems layer their sentimental coatings over human and animal bodies, offering a ‘pet closet’, which paradoxically aids the expression of sexual love and religious fervour. This pet closet also allows the possibility of proxy touch as a way of obviating Catholic guilt in the use of an intermediary figure. Chow dogs are known for being nervous and aggressive with outsiders/strangers; the touch that Whym Chow offers biographically and textually is only for his owners. Whym Chow stands guard protecting the inner sanctum of Michael Field’s poetics and relationship. Whym Chow acts a child and poetic offspring throughout the poems. This particular combination of intimacy and prohibition also appears in other unexpected fin-de-siècle spaces. Freud famously instructed American modernist poet H.D (Hilda Doolittle) not to touch his pet chow Yofi during analysis, ‘”Do not touch her…she snaps - she is very difficult with strangers,”’[viii] a request, which H.D wilfully ignores. Whym Chow: Flame of Love embodies an invitation into tactile poetics but also excludes unwanted approaches. As poem IX reiterates Whym Chow is guard dog, guardian angel and Holy Spirit, corporeal and incorporeal: ‘O Chow, my little Love, you watch above her; /Watch still beside me, be with me her Lover!’ (46-47). However, it also instructs the dog to join in the desiring of the poem’s muse, ‘be with me her lover’ can be read as be beside me, but also as if the desiring is being doubled and shared between the human and canine subjects. This shared desire is suggested throughout the poems, which often propose varying forms of triangulation

In XXIX, the themes of mortality, pain and absence threaten the transcendent trinity. Whym Chow becomes the last hope of salvation for the absent, suffering muse:

‘Nor die! Unless thy ruddy flambeau leaps,

Naught can assuage her grief,

Chow becomes the only form of opiate available to alleviate grief and pain and is commanded to be present after (biographical) death. Poem XXIX attempts a resolution of Field’s pagan, classical and Christian motifs through the use of ‘Bacchic resin’ (8) and dog-God flame (I am the way, the truth and the light). The poetic voice offers training in supplication and obedience, instructing the dog comforter and family member, but also worships Chow as the keeper and sustainer of the flame-flambeau coat, ‘Light her, as with torch of fir,’ (fur) (5). These sentimental coatings prove their poetic worth elegiacally, offering a form of pet salvation, if not resurrection. Ultimately, I want to suggest that WhymChow’s oddity is precisely what makes it worthy of consideration by scholars interested in the links between closeting, sentimentality, camp and queer. 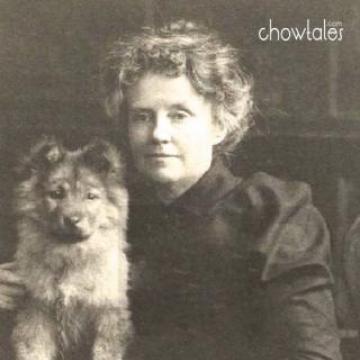