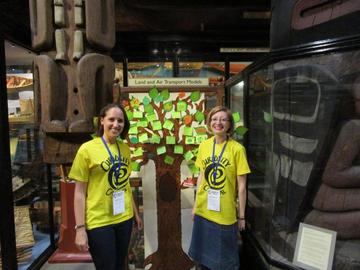 If you had to sum up your identity with only a pen and a post-it note – or a tweet – what would you write?

This was the challenge set for visitors to the University’s largest ever public engagement event last month, the Curiosity Carnival.

Helen Swift and Jessica Goodman are experts in Medieval and Early Modern French literature, and explore themes like identity, memory, and posterity, to reveal how unstable and precarious they are.

To get people thinking about these themes, they asked them to draw one object – or write up to five words – that would represent their legacy.

“The blue-and-red T-shirt was clearly an important projection of an identity this person was very happy with,” says Helen.

Some people left their favourite inspirational quote, or a message. “Words: treasure them,” wrote one visitor.

Before they drew on the post-it note and added this ‘leaf’ to the legacy tree, visitors were asked to think about what happens to someone’s identity after they die, and the objects and words through which we construct stories about people from the past, and ourselves.

This led to a lot of thought-provoking conversations. A teenager told Jessica that he often deleted his Instagram pictures because they didn’t represent him anymore. An older woman decided she needed to think about what she could leave her children.

Others “were inspired to think environmentally about our individual and collective impact on the world in what we leave,” says Jessica. “Some people made very honest admissions that what our generation will leave will be a lot of rubbish.”

One person left an ellipsis… “This was an outcome of a very interesting conversation about how much what we call someone’s identity is or isn’t identical with that person’s sense of self,” says Helen.

“Even when you’re projecting your own identity, it’s still a projection, inevitably partial – and so identity is revealed as a slippery and uncertain entity insofar as it can be defined.”

Jess says the exercise was a great way to introduce visitors to timeless themes of literary study. “It was fantastic to spark people’s interest in the themes we work on in French texts from the past, which might initially seem inaccessible,” she says.

“I found it exciting to see people applying the idea of ‘You are what you leave’ to their own lives”.

“And some people also just had fun with our sticky shapes,” adds Helen.

What would you leave behind? Put it in a tweet and use the hashtag #cclegacy

This post originally appeared on the Arts Blog which you can view here.