Elizabeth Elliott is a second year at Pacific Lutheran University (Tacoma, WA, USA) where she is majoring in Biology and has interests in queer studies. In Fall 2019 she studied Queer Studies and American Literature while an associated student at St. Anne’s College, Oxford.

As I read Living a Feminist Life, which Sara Ahmed begins by discussing her childhood experiences of becoming a feminist, I began to remember my own process, which involved a fascination with fairy tales. I was obsessed with Disney movies—particularly The Little Mermaid. My family owned the VHS tape of The Little Mermaid, and when we watched it, I would sit attentively from the beginning of the old advertisements to the end and the rewinding of the movie during which the waves would recede. When I read Ahmed’s chapter ‘Willfulness and Feminist Subjectivity,’ the character of the little mermaid began to resurface in my mind. I began to think of the main character as a willful subject who has her own direction she follows, against the direction of those around her. In this blog, I consider Hans Christian Andersen’s ‘The Little Mermaid’ in relation to Ahmed’s concept of ‘willfulness’. I focus on the original story because, although both the story and the Disney film might be understood as teaching texts in that they showcase consequences of various behaviors, the original has had a longer span of influence and, I suggest, showcases consequences of various behaviors with deeper complexity.

For Ahmed, reflection is part of the process of becoming a feminist. It offers a way to generate consciousness of how gender and race operate in the world. For Ahmed, feminist theory is built from everyday feminist practice at home and work that calls attention to problems in the world. Further developing her previously theorized figures of the feminist killjoy and willful subject, the experience of becoming and being a feminist is key to the way Ahmed unpacks the concept of willfulness.

Ahmed theorizes willfulness in relation to its association with feminists who are judged as being ‘willful’ or seen as suffering from an abundance of will (Ahmed 65). These judgments are used as a way of denigrating feminism: “feminism is understood as a problem of will” (Ahmed 65). Here, the judgement of the ‘will’ of a feminist has the feminist becoming the problem, rather than focusing on their critique of a systemic issue. The term willful is defined by Ahmed as “asserting or disposed to assert one’s own will against persuasion, instruction, or command; governed by will without regard to reason; determined to take one’s own way; obstinately self-willed or perverse” (Ahmed 65). Willfulness describes an individual will going against collective wills (Ahmed 71). There is a directional force in the collective will, but being ‘willful’ is to oppose this and go the ‘wrong’ way and is foundational to the figure of the willful girl (Ahmed 70).

Ahmed notes that disobedience is a consequence of having a will, holding different consequences for boys and girls: it is “who you are rather than what you do,” (Ahmed 68). The willful subject is more accurately a willful girl due to these different standards between boys and girls, and the idea of disobeying and being overcome with desire limits the legitimacy of these individuals’ choices. The disobedience and desire of a willful girl is explained by willfulness, instead of reviewing the authority or influence she has been exposing and challenging.

Andersen describes mermaids as having no immortal soul, and equates this with forms of happiness. The little mermaid says, “I would give gladly all the hundreds of years that I have to live, to be a human being only for one day, and to have the hope of knowing the happiness of that glorious world above the stars” (Andersen). Her interest in humans leads her to go against mermaid common sense and search for the human form of happiness. She is advised by her grandmother: “‘You must not think of that,” said the old woman; “we feel ourselves to be much happier and much better off than human beings’” (Andersen). This idea of ‘happiness’ resembles the form of happiness discussed by Ahmed. The little mermaid is unhappy simply living as a mermaid and Ahmed grapples with a common and confined path to happiness that leaves consequences for “[w]omen who are not made happy by what is supposed to make them happy” (Ahmed 57).  As with the figure of the willful girl, the little mermaid’s willfulness is associated with a different goal of happiness outside of an ‘expected happiness’. Perhaps willfulness is wrapped up with failing to take the single path given, and creating a different path for oneself with a different idea of where the path should lead. We might understand the little mermaid’s orientation towards the land as the creation of a new, unofficial path—what Ahmed, drawing from landscape architecture, would call a “desire line” (Ahmed, “Breaking Points”). When the little mermaid takes a step to transform into a human, the sea witch tells her: “it is very stupid of you, but you shall have your way, and it will bring you to sorrow, my pretty princess” (Andersen). Here, the idea of becoming unhappy resurfaces as a warning against the desire line that the little mermaid chooses to follow and again suggests that to follow ‘her way’ and change into a human is wrong, or ‘stupid’.

Andersen’s story teaches its readers—children—about obedience. Although the little mermaid is unable to gain a soul to live as a human, she can’t return to living as a mermaid, and so she is given a more complex position than simply dying and becoming sea foam like other mermaids who die. The little mermaid becomes a part of the group “The Daughters of the Air,” who travel for about three hundred years in an attempt to gain an immortal soul. As the group travels, children help decide their fate, as “The child does not know, when we fly through the room, that we smile with joy at his good conduct, for we can count one year less of our three hundred years. But when we see a naughty or a wicked child, we shed tears of sorrow, and for every tear a day is added to our time of trial!” (Andersen). Children who are disobedient continually add to the suffering of “The Daughters of the Air” and yet, the story of the little mermaid is about how she chooses to follow her own will, in defiance of the common and expected path.

The moral of the story relates to the value of obedience: there are consequences to asserting one’s will and desires. That the group is “Daughters of the Air” suggests that, as Ahmed notes, a judgement of willfulness is based on “who you are rather than what you do” (Ahmed 68). Having tried to attain happiness through a different path as opposed to the common path, the “Daughters of the Air” can only be rescued by children who conform to the common path: children who are “good,” and not “naughty” or “wicked.” The story encourages children to conform to authority; it depicts willfulness as harmful for both the little mermaid and the children to whom it is addressed. Andersen continues to depict the individual as the problem, rather than the system. Individuals whose choices mark them as ‘willful’ are policed, directly and indirectly, until they become obedient. The willfulness of the little mermaid ultimately conforms to a human will for herself and the children reading the text. The desire of the little mermaid for a human man may be queer for the characters of the story, yet for the children reading the story it depicts a heteronormative desire and relationship to revere. Children’s obedience saves “The Daughters of the Air,” and so children reading the text are taught to conform, if not for their own sake then to save willful others. In Ahmed’s theorization, willfulness continues to push up against the demand to be willing, yet in Anderson’s story the little mermaid’s willfulness ultimately falls within the framework of willingness for the reader.

Perhaps it is the consequence of the idea of happiness as a single path that denies any happy ending for those being unwilling to conform. For when the little mermaid receives legs, she is happy to associate with the land and potentially gain a soul, but its contingency on marriage reinforces subservience, which she cannot accomplish. The final position she holds in “The Daughters of the Air” offers a soul, but only after her willfulness is undone by the obedience of children. In ‘The Little Mermaid’, one can reach happiness by becoming ‘willing’. For queer children, the story stands as both inspiration and warning of the dangers one faces in carving new paths or ‘desire lines’. Conceptually, mermaids have long offered queer and trans youth the possibility of existing otherwise – both by transcending physical sex and accessing a parallel realm. The organization Mermaids UK, for example, uses the concept of mermaids to support trans youth, families, and educate communities (Mermaids UK). And ‘The Little Mermaid’ is not quite a happily ending fairy tale in which becoming willing gives happiness. The willfulness of the little mermaid, not quite undone by the story’s ending, continues to be repurposed as a promise for queer individuals to find happiness. 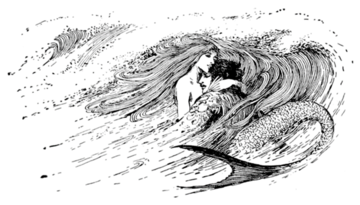