What is the difference between 'feeling' digital and 'being digital'?

What is the difference between ‘feeling digital’ and ‘being digital’? Is the digital revolution making us more or less generous? On 22 July we were joined by Michael Docherty, Digital and Strategic Marketing Planning Director at Cancer Research UK, to explore how fundraising can adapt to the digital age.

Digital tools makes ‘the barriers to entry very low’, and with 163,000 charities in the UK competing for the attention of online audiences fundraising is a ‘very tough game’ Docherty explained. But with 20% of Cancer Research UK’s income coming through digital channels, it is an integral part of their fundraising strategy.

Docherty outlined how digital can be used to put ‘more control in people’s hands’. He showed how engaging with clicktivists, slacktivists and hacktivists, can have incredibly powerful results.

The #nomakeupselfie campaign, for example, was not started by CRUK, but as it began to gain momentum the charity harnessed its power and in less than a week £8 million was raised, which will fund 10 clinical trials. The CRUK website took more donations in four days than it had done in two years. Docherty said CRUK could have raised even more had they taken a more global approach and made it easier to donate online.

CRUK are also mobilising online communities in other ways, which do not require monetary donations, just a small time commitment. They worked with a range of partners to develop a mobile game ‘Reverse the Odds’, which incorporated the analysis of cancer data, meaning thousands of citizen scientists helped to identify cancer cells. By crowdsourcing this research, CRUK collected data in two weeks, which would have taken their scientists 18 months to gather.

Similarly, CRUK have used integrated online campaigns to campaign for policy change. They produced a powerful video where children describe cigarette packaging to lobby government on standardised packaging. The video was viewed over 600,000 times online.

These digital campaigns have made a big impact, but Docherty argued that there is still a way to go. At the moment CRUK ‘feel digital’ but they need to make the transition to ‘being digital’. At home, he suggested, digital has become an integral part of our lives, whereas this is not the case at work. We need to implement ‘digital-era ways of working’ rather than just using digital tools.

When an audience member who is just launching a non-profit’s digital presence asked Docherty for his main piece of advice he said ‘fail fast and learn’. The digital environment changes rapidly, so rather than investing in bespoke solutions, make use of the knowledge and resources available online. Experiment and be digital! 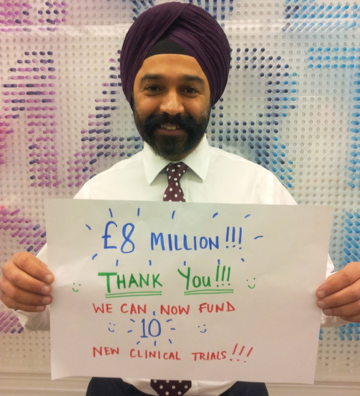