In this blog Edward Scrivens (DPhil student in Egyptology) examines how his own experiences as drag artist and improviser are an expression of play.

At the age of five I took to dressing up as Dorothy Gale from The Wizard of Oz. Obsessed with the classic 1939 film, I longed not only to watch Dorothy, but to be Dorothy and in turn, to inhabit the wonderful world of Oz. Taking two tea-towels, I placed them around my head and waist to simulate long hair and a skirt. I danced, played and sang my way around our kitchen, transforming the floorplan of our West Midlands home into the landscape of Oz.

These childhood practices of make-believe and play have continued to shape my experience of the world, even into that stifling thing referred to as ‘adulthood.’ Now as a twenty-six-year-old researcher, improviser, and drag artist, they are at the very root of my performance practice. For me, drag and improv is (in a sense) ‘child’s play’. However, my experiences have taught me that this play is not an infantile indulgence that must be forgotten along with dolls, teddies and dress-up. Rather, it is an inherent creative and cognitive mechanism, the socialised barriers to which should be unlearned.

My drag and improv lives converge in my co-created show ‘The Dragprov Revue.’ My persona Eaton Messe, and her beleaguered stage partner Christian Adore, are cabaret performers who dream of stardom. Our personas improvise songs, scenes and raps from audience suggestions in the hope of being ‘discovered’ and whisked away to Chicago. The performance operates through a series of playful interactions; between the performers and the audience, Eaton and Christian (and our out-of-drag ‘selves’, Chesca and Ed), and with the framing devices of the show itself. This illustrates an underlying commonality in my experience of both drag and improv, namely the centrality of play and playfulness.

Improvisation is fundamentally a process of play. Not only do improvisers often refer to performing as ‘playing’, but games form much of the framework upon which improv is built. Short-form improv is made up of discreet pieces referred to as ‘games’, since each one is played according to a particular set of rules. In purely scene-based or long-form improv, ‘the game’ is more of a guiding concept. Broadly defined, it’s a pattern of behaviour that emerges in one or more characters and is repeated or ‘played’. The game might become what the scene is ‘about’, or be a catalyst for exploring relationships between the characters who play it (although there are numerous variations—see Erik Voss’ Splitsider.com article below). Through engaging in games, improv is an exercise in playing with and within structures. This relies on cooperation with the other improvisers. Performers abide by the scene-generating maxim of ‘yes and’ (accepting and furthering what is given to you), and endeavour to celebrate both each other’s ideas and the ‘shiny things’ (fun details) that emerge organically from playing with one another and with the audience.

Similarly, drag allows the performer to play with normative representations of gender, or to ignore these paradigms altogether. A drag artist’s palette includes archetypes of heteronormative gender roles, popular culture, and the practices and subcultures of drag itself, all used or discarded at the performer’s desire. This process can be polemic or irreverent, but is frequently joyous. Like improv it thrives on audience interaction, whether through direct exchanges with individuals or leading the crowd toward a collective recognition of chosen reference points. These communal games cohere the players in a celebratory sense of group belonging.

As in improv, such plays create and utilise a tension between structure and antistructure, between artifice and reality, one which every drag queen/king/entity experiences and explores differently. Eaton Messe, whose name participates in a tradition of word play in crafting drag personas (e.g. Anna Phylactic, Adam All, and Creme Fatale, to name a few), is a game of make-believe that I construct and inhabit. Yet she is a fantasy which nonetheless draws upon elements of myself, whether through my own aesthetic preferences or by incorporating aspects of my personality. Navigating the boundaries, permeabilities, and dissonances of that relationship forms as much a part of my drag as comedy and a penchant for vintage styles, and is an example of the exploratory dimension of play.
Drag and improv are rooted in playfulness. Both improvisers and drag artists make, break, and circumnavigate rules, finding the joy in restriction as much as freedom. More fundamentally, they are means through which I can interact with, create, and recreate my personal world, just as I did when I would become Dorothy and run around the landing. Only now I have more elaborate tea-towels. 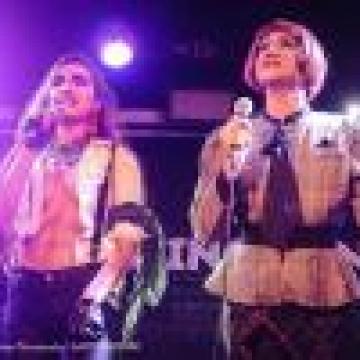