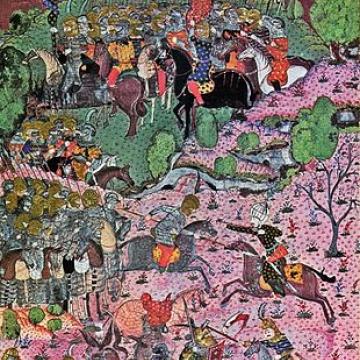 Ottoman miniature of the Battle of Mohaćs (1526) between the Ottoman Empire and the Kingdom of Hungary whose outcome continues to shape Central European society and culture to this day. Via Wikimedia Commons.

War is part of mankind’s universal experience across the ages. Its pursuit has shaped societies from the Aztecs to the Zulu Kingdom. Historians recognize, for instance, that the British entanglement in warfare on a global scale in the eighteenth century and the creation of what John Brewer classically described as the fiscal-military state were crucial to the commercialization of the British economy and thus the industrial revolution. The history of war, as Sir Michael Howard has continuously argued, is thus more than the study of military campaigns or individual battles. Rather, it is a key aspect of human history in general, without which our understanding of political, social, economic, and cultural developments remains fundamentally incomplete.

Sir Michael’s intellectual legacy is very much alive at King’s College London (KCL) and the University of Oxford, which, together, have the highest concentration of historians of war and related areas in the UK. To further strengthen expertise in this field and promote the exchange of ideas and continued innovation, the University of Oxford and the Sir Michael Howard Centre for the History of War at KCL have been collaborating since 2017. As part of this cooperation, annual conferences alternating between Oxford and London provide a platform primarily for postgraduate students, doctoral candidates, and early career researchers affiliated with either of the two institutions to present and discuss research in progress. The conferences aim to explore common themes in the history of war across chronological, regional, and cultural specializations.

The next History of War Conference will take place on Tuesday, 19 March 2019 at All Souls College, Oxford.

Please register here. Registration will be open until 11 March.