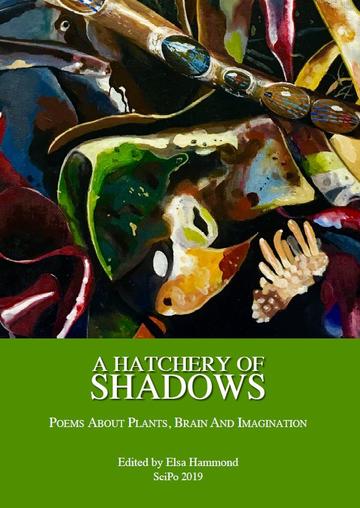 Join us to celebrate the launch of A Hatchery of Shadows: Poems about Plants, Brain and Imagination (SciPo, 2020)

This event will run on Zoom, and will be available to view after the event. A link to the event will be emailed to you via Eventbrite within 48 hours of the event starting.

A Hatchery of Shadows is abundant with ways of approaching, thinking about and imagining plants and our corresponding lives. Questions of change, time, the marginal, and the interaction of humanity with plant life appear frequently, as our poets draw on themes of anthropogenic climate change, yet also push outwards to explore the shadowy and exciting connections between plants, brain and imagination in poetry.

‘I have read this anthology three times, with immense pleasure. Each reading has uncovered new meanings, new levels of enjoyment in the resources of free verse, handled with exceptional skill here by a bunch of fine poets. The anthology’s central themes — plants, the brain and imagination — are interwoven in a delightfully varied but unified verbal dance. The anthology is testimony to the unending capacity of the natural world to elicit wonder, curiosity, puzzlement and imaginative exploration.’ -  Lucy Newlyn, Poet and Emeritus Fellow in English

Join us to hear readings from the anthology:

Elsa Hammond has edited two anthologies for SciPo, and is an award-winning travel writer. She lectures in English at St Hilda’s College, Oxford. Past engagements include: BBC Radio 4 Woman’s Hour, TEDx Bath, the Stanford Travel Writers Festival, the Hay Literary Festival, the Royal Geographical Society, and the Bath Royal Literary and Scientific Institution.

Jenny Lewis is a poet, playwright and translator who teaches poetry at Oxford University. She has published four poetry collections and three chapbooks. Her recent work includes Gilgamesh Retold (Carcanet, 2018) and, with the exiled Iraqi poet, Adnan Al-Sayegh, Let Me Tell You What I Saw (Seren, 2020).

Penny Boxall's collections are Ship of the Line and Who Goes There? She won the Edwin Morgan Poetry Award in 2016. In 2019 she was Visiting Research Fellow in the Creative Arts at Merton College, Oxford, and is currently Royal Literary Fund Fellow at the University of York.

Adam Horovitz has published two collections of poetry, Turning (Headland, 2011) and The Soil Never Sleeps (Palewell, 2018). In 2021, he will appear on Cerys Matthews’ album We Come From the Sun, and releases his next collection, Love & Other Fairy Tales, with Indigo Dreams.

Denni Turp lives in north Wales, and is a graduate and post-graduate of Bangor University. Her poems have been published in poetry magazines, webzines and anthologies. In 2019, for the sixth year running, she organised the north Wales session as part of the global 100 Thousand Poets for Change event.

Stephen Wren was educated at Cambridge and worked as a chemist in industry for many years. He transitioned back into academia at Oxford before joining Kingston University in September 2018. Stephen recently organised the online ‘science of the seas’ event for SciPo and writes words based on science, people and faith.

Inge Milfull is half German, half Australian. She grew up in Germany and now works in Oxford as a lexicographer. She now writes mostly in English. She is a member of the Back Room Poets and runs one of their poetry workshops.

Margot Myers lives in Oxford. She has a PhD in fairy tales, and enjoys the surreal, the ironic, the unexpected. She has been widely published, including her recent pamphlet I Meant To Say…     https://www.poetshousepamphlets.co.uk/

Miranda Lynn Barnes, a poet from the US, now lives in Bristol. Miranda’s poems often engage with science and have appeared in New Welsh Reader, Shearsman, Tears in the Fence, and Under the Radar, among other journals & anthologies. Her debut pamphlet, Blue Dot Aubade, is out now with V. Press.

Sarah Watkinson enjoys thinking about the goings-on of nature. She is an Emeritus Fellow of St Hildas who worked on the life of soil fungi at Oxford University's Department of Plant Sciences and was Tutor in Biology to scores of outstanding students. Now she writes poetry about the same things. Her work is published in magazines and the pamphlets Dung Beetles Navigate by Starlight, (2017), as well as The Woods of Hazel, (2020) with Romola Parish, from a year as Wytham Woods inaugural Writer in Residence. In 2016 she and Jenny Lewis of The Poet's House Oxford set up SciPo at St Hilda's to encourage more science poetry.

Rosemary Appleton writes, fuelled by coffee, in the wilds of East Anglia. She has twice been a winner of the Oxford Radcliffe Library Science & Poetry Prize and her work has appeared in Mslexia, The Fenland Reed, Black Bough Poems, The Wellington Street Journal and elsewhere. Her poems are anthologised by Dunlin Press, PaperSwans, and Fairacre Press.

More details about A Hatchery of Shadows: Poems about Plants, Brain and Imagination can be found here. To buy, please contact the editor at elsa.hammond@st-hildas.ox.ac.uk

SciPo explores the creative common ground between science and poetry, and was established at St Hilda’s College, Oxford, by Emeritus Fellow in Biology Sarah Watkinson and poet Jenny Lewis of 'The Poet's House Oxford'. In 2019-20, SciPo was led by Sarah Watkinson and Elsa Hammond, with the generous support of St Hilda’s College and The Oxford Research Centre for the Humanities (TORCH).