CANCELLED: Conference: Collecting Africa: Before, During and After Colonial Overrule 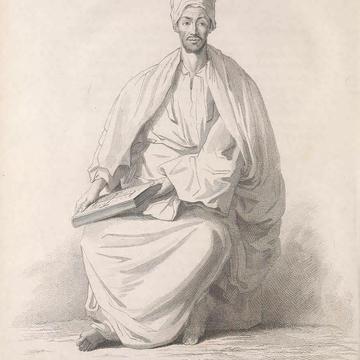 Henry Salt, Portait of "Dofter Esther, a Learned Abyssinian" holding a manuscript bound in wooden boards covered with tooled leather, 300 x 240 mm, from A Voyage to Abyssinia, and Travels Into the Interior of That Country (London : F. C. and J. Rivington, 1814)

Conference: Collecting Africa: Before, During and After Colonial Overrule

In recent years European and US museums and libraries have been facing mounting calls for the return of objects taken or acquired from Africa and other parts of the world during the Colonial era. The objects, the ways in which they are gathered and presented, and the institutions which house them have become contested, especially when they are tied to histories of violence and dispossession. The contestation is driven by a greater awareness of the relations between institutions and politics, but also by changes in society and the balance of power. These issues have become interwoven with calls for change in the geopolitics of knowledge which have been met with support and opposition, sometimes violent, as in the case of Rhodes University. The increased focus on these issues in the media indicates that these collections have come to embody competing interests and the struggles of individuals within modern societies, and that the debates about them are as much about the present as the past. Museums in the UK have been responding in different ways to these challenges while scholars and governments debate on the institutional actions or activities that should be undertaken to address these contested collections, especially after the Sarr-Savoy report.

This conference seeks to place these debates in a historical perspective and provide an analysis of materials from Africa in UK collections that focuses on the significances they possessed in the contexts from which they were taken and on the significances they assumed and assume in the contexts in which they were and are deposited and displayed. Throughout history, traders, museum representatives, travellers and missionaries from Europe and Africa collected objects, gathered botanical and mineral samples, and took photographs for a variety of educational and socio-political reasons, sometimes assisted in these processes by African interlocutors engaged in a series of political projects of their own. Taken as a whole, these collections can be viewed as historical records of choices, values or ideologies, while the processes which led to their creation and categorization bear witness to relations of power and knowledge. How did these interactions reshape respective concepts and categories about each “other”? Did these collecting patterns change over time? To what extent are the current narratives reliant on vocabularies and paradigms that need to be reassessed?

for this conference has been generously provided by the Oxford Research Centre in the Humanities (TORCH), the Oxford Centre for Byzantine Research (OCBR), and by the Beta maṣāḥǝft: Manuscripts of Ethiopia and Eritrea project (University of Hamburg) Financial support for the conference has also been provided by a Getty/ACLS Postdoctoral Fellowship in the History of Art from the American Council of Learned Societies supported by the Getty Foundation. TORCH offers a series of opportunities to scholars from African countries who wish to spend time at the University of Oxford including  the Global South Visiting Professorships 2020-2021 and the AfOx TORCH fellowships.

This event has been cancelled. Please get in touch with the International Officer: anbara.khalidi@humanities.ox.ac.uk, if you would like any further information