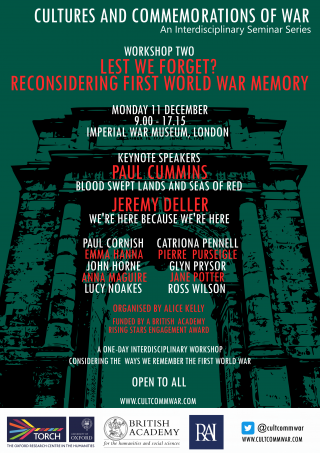 This interdisciplinary seminar series ‘Cultures and Commemorations of War’ brings together early career researchers and advanced scholars working on the memory of war in a range of disciplines with practitioners, policy makers, charities, and representatives from the media and culture and heritage industries. Through a series of three one-day workshops held in Oxford and London in 2017-18, this series aims to foster an interdisciplinary dialogue about the history and nature of war commemoration across time and its cultural, social, psychological and political iterations.