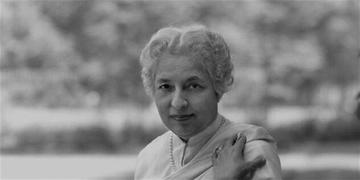 For the first GTI event of 2020, professor Manu Bhagavan will speak on the life and work of Indian diplomat and politician Vijaya Lakshmi Pandit.

Vijaya Lakshmi Pandit was the first woman to be elected president of the United Nations General Assembly, in 1953. A prominent politician and active Indian nationalist, she was also the first Indian woman to hold a cabinet position in pre-independent India. As newly-independent India's top diplomat, Pandit served as ambassador to the Soviet Union (1947-49), the United States and Mexico (1949-51), Ireland (1955-61), and Spain (1958-61), and high commissioner to the United Kingdom (1955-61). In 1979, she was appointed India's representative to the UN Human Rights Commission. Pandit was an Honorary Fellow of Somerville College.

Manu Bhagavan is a Professor of History and Human Rights at Hunter College and the Graduate Center of the City University of New York. He specialises in the study of late-colonial and post-colonial India, particularly in human rights, (inter)nationalism, and questions of sovereignty. His critically-acclaimed 2012 book The Peacemakers: India and the Quest for One World is an international history that deals with India's efforts to create consensus around the framework of human rights.