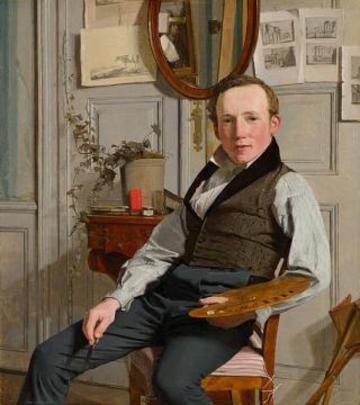 The TORCH Nordic Network is hosting an event on 'Literary and Visual Culture in Nineteenth-Century Denmark'. Nineteenth-century Danish culture has often been explored in disciplinary frameworks that have generated important scholarship on particular works within specific literary or art-historical narratives, but that have overlooked broader cultural and historical formations. This seminar picks up more recent interdisciplinary approaches that enable us to pay more attention to connections between different cultural forms, between elite and popular contexts, between institutional or political histories and the object, and between Denmark and the wider world of European culture. The papers focus on significant artists and writers from the so-called Golden Age to the end of the century, with a shared emphasis on the circulation of images and objects through these different connective matrices.

The seminar will also connect scholars working on nineteenth-century Danish cultural history in the UK and in Denmark. Funding has been generously provided by the Nordic Network at TORCH, the Department of History of Art, University of Warwick, and the Connecting Cultures Global Research Priority, University of Warwick.

Patrick Kragelund (independent scholar, Copenhagen): Constantin Hansen’s Prometheus Frescoes at the University of Copenhagen (1843-53) and the End of the Old Order

Focus is on the iconography of the frescoes and their links to the reflections of Georg Zoëga (1755-1809) on the ‘symbolism’ of classical art. It is argued that Hansen's learned and optimistic vision of man's progress towards enlightenment was overtaken by the events of 1848 (revolutions, overthrow or, as in Denmark, downsizing of Monarchy and introduction of a free constitution) and that these events critically transformed attitudes to the ideals of ‘Bildung’ represented by Hansen's frescoes.

The Danish sculptor Bertel Thorvaldsen (1770-1844) was one of the most influential artists and public figures of 19th-century Europe. From his base in Rome, he undertook commissions for public monuments and private collections in many of the greatest cities of Europe. It is therefore not surprising that Thorvaldsen and representations of his statues appear in print culture the world over. What can these texts – ranging from literary works to travelogues and memoires, from letters to biographies and autobiographies – tell us about the circulation of Thorvaldsen’s sculptures? How are Thorvaldsen’s sculptures remediated through words and what is the local context of this remediation? Besides providing us with information on the sculptures’ journeys, trajectories and contexts of display, these texts also represent a further possibility of mobility for the sculptural objects, spreading their representations often without the support of visual aids such as illustrations and sketches. In which sense can the mobility of these texts help us understand the mobility of the objects themselves and vice versa? In this paper, I will answer these questions analysing and comparing a selection of texts belonging to different literary genres: the English translation and adaptation of Thiele’s Thorvaldsen-biography by Rev M. R. Barnard, The Life of Thorvaldsen (1865); the two dramas I Rom (1870, In Rome) by Swedish author August Strindberg and Det gyldne skind (1908, The Golden Fleece) by the Dane Hjalmar Bergstrøm; excerpts from Asfalt (1979, Asphalt), the memoirs of Swedish writer Ivar Lo- Johansson. Which stories of transmission and displacement are behind these individual textual ‘fragments’?

This paper examines Kristian Zahrtmann’s paintings of Socrates and Alcibiades made in 1907 and 1911. The date of the first painting coincides with the great public morality scandal of 1906-7, when male homosexuality first entered public consciousness and public debate, while the second was painted in its aftermath (and the model for Alcibiades, Hjalmar Sørensen, had been arrested during the events of 1906). While Plato’s Symposium and the figures of Socrates and Alcibiades were commonly cited as noble precedents in the homosexual cultures of late-nineteenth and early-twentieth century Europe, Zahrtmann’s paintings are far more than an apologia for same-sex desire at a moment of intense homosexual oppression. Rather than painting the ancient Greek men as straightforward symbols of a legitimate desire, Zahrtmann takes the Symposium more seriously as a philosophical text, engaging with both the arguments and the form of those arguments in Socrates’ and Alcibiades’ speeches in order to present an ethics of homosexuality. From his conservative perspective, Zahrtmann attempts to visualise the questions of virtue, wisdom and desire discussed in the Symposium; and, in line with his project to maintain the moral force of history painting in contemporary art, he suggests that art, like desire, is freighted with concerns about time, age and mortality.

The topic of my talk will be Andersen’s reliance on the periodical press. Especially illustrated magazines and newspapers had as ‘modern’ media a significant effect on several of his later tales and provided a platform from which he could promote his Modern authorship. I shall discuss how some tales were shaped to meet the interests of a periodical readership and end with a discussion of his periodical tale ‘Gudfaders Billedbog’ (Godfather’s Picture Book, 1868). This ‘textual’ picture book, first published without illustrations in Illustreret Tidende, referred explicitly to the many private picture books Andersen made for the children of his close friends – picture books he crafted with scissors, glue and ‘a poetic idea’ out of the scraps of nineteenth-century print and visual culture. It is my contention that Andersen’s periodical tales – tales that were either written for periodicals or referred to the popular press in various ways – should be considered more extensively in order to fully appreciate the impact of modern print culture on an authorship whose world-wide fame to a large extent depends on Andersen’s impersonation of a folkloric storyteller.

Colin Roth (University of Sheffield): Bottoms Up (and down): Bournonville, Andersen and the transmission of ideas

This talk will range fairly widely across disciplines to show how popular forms conveyed the ideas of 'high' culture to a wider audience, and to look at some of the consequences of that transit.

This talk will address the challenges of presenting Danish Golden Age art and culture at exhibition to a foreign (non-Danish) audience. From initial conception, to the exhibition opening and press conference, it will consider the pleasures, problematics and compromises that accompany the interaction of scholarly research and its wider public dissemination to an audience unfamiliar with the art, the artist and the culture of the Danish Golden Age.

Elettra Carbone is Senior Teaching Fellow in Norwegian at the Department of Scandinavian Studies, UCL and a Director of Norvik Press Ltd. She holds a PhD in Scandinavian Studies and an MA in Comparative Literature from UCL. She has published a monograph on representations of Italy in Nordic literature between the 1830s and the 1910s (Nuova Cultura, 2016) and co-edited a number of anthologies on different aspects of Nordic culture and literature. These include an edited volume on sculpture in the Nordic region (Ashgate, 2017), a publication on the reception of the Italian Risorgimento in Norway (Lyset kommer fra sør, Gyldendal, 2011) and two themed issue of the journal Scandinavica on the Norwegian Constitution and Independence of 1814 (Scandinavica 55:1, 2015) and on Nordic publishing and book history (Scandinavica 51:2, 20). She is currently working on an anthology of Nordic literature (Norvik Press, 2018) and on a Norwegian language grammar (Hodder & Stoughton, 2017).

Michael Hatt is Professor of History of Art at the University of Warwick. He was one of the curators of the exhibition Sculpture Victorious: Art in an Age of Invention, 1837-1901 (Yale Center for British Art, Tate Britain) and a co-editor of the accompanying publication (Yale University Press, 2014). His most recent publications include ‘Sculpture, Slavery and the Armstrong Gun: John Bell’s American Slave’ in Hiram Powers’s Greek Slave: A Transatlantic Object, a special issue of Ninteenth-Century Art Worldwide co-edited with Martina Droth (June 2016) and ‘Perspectives on Eckersberg’, Art History (forthcoming, February 2017).

David Jackson is Professor of Art History at the University of Leeds specialising in Russian and Nordic art. He is the author of The Russian Vision: The Art of Ilya Repin (2015) and The Wanderers and critical realism in nineteenth century Russian painting (2011). His many exhibitions, with museum partners across Europe, include Nordic Art: The Modern Breakthrough; The Peredvizhniki. Pioneers of Russian painting; Christen Købke: Danish Master of Light; Akseli Gallen-Kallela 1865-1931: the Spirit of Finland and Russian Landscape. He has also contributed to a range of international exhibitions including In Front of Nature. The European Landscapes of Thomas Fearnley; P C Skovgaard – The Danish Golden Age Re-evaluated and Illusions of Reality. Naturalist painting, photography, theatre and cinema 1875-1918. He is currently working on an exhibition on Northern Romantic Landscape painting.

Patrick Kragelund was the Director of the Danish National Art Library from 1998 to 2016, before which he held a number of distinguished posts in Danish universities, and was Assistant Director of the Danish Academy in Rome. He has published extensively in classical history and literature, and in Danish history and art history. His publications include Roman Historical Drama: The Octavia in Antiquity and Beyond (OUP, 2015), Abildgaard, kunstneren mellem oprørene (2 vols, 1999), and the forthcoming A Stage for a King: Christian IV and the Architecture and Sculptures at Frederikborg Palace (2017), as well as many articles in peer-reviewed scholarly journals and edited collections.

Colin Roth is a Research Fellow in the Centre for the History of Philosophy at the University of Sheffield, having taken his B.Mus. and Ph.D. in the University's Music Department after training as a clarinettist at the Guildhall School of Music and Drama, and in Benesh Dance Notation at the Institute of Choreology. His specialism is the interdisciplinary study of the psychology of aesthetics. In the 1990s he lectured regularly at the Tate and Royal Academy of Arts. He is now co-director of the University of Sheffield Centre for Nordic Studies (http://www.sheffield.ac.uk/nordic-studies). Besides a number of articles on Nielsen in Carl Nielsen Studies and Fund og Forskning, his publications include Being Happier (1997), articles on Bournonville, H.C. Andersen and Kierkegaard and their contemporaries, and the unsingable singers' translation of Peter Heise's Drot og Marsk (2013). He is currently working on a translation of Jens Henrik Koudal's For borgere og bønder: Stadsmusikantvæsenet i Danmark 1660-1800.

Jakob Stougaard-Nielsen is Senior Lecturer in Scandinavian Literature at UCL. He has published several articles focusing on Hans Christian Andersen’s fairy tales and nineteenth-century visual and print culture and is currently working on a monograph on Andersen. Since 2014, he has been involved in an AHRC-funded collaborative research project on Translating the Literatures of Small European Nations, and his book Scandinavian Crime Fiction (Bloomsbury) will be published in January 2017.