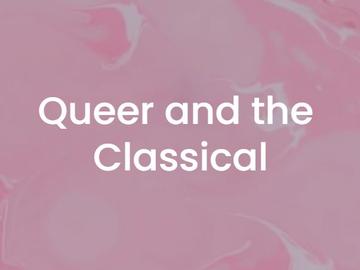 What does Classical Studies, a field often conflated to the universal and weaponised culturally, ideologically, and materially, have to do with queer studies, an anti-institutional theoretical positioning that emerged in the 90s and still retains a subversive force for particular lives, thoughts, and feelings? How should we account for the genealogies of ‘promiscuous borrowing, reworking, and interested claiming’ between the theoretical histories of both fields?

With this conference, we aim to address and interrogate the dangerous proximity of queer studies to the disciplinary power vacuum of Classical Studies. To combat this, we are interested in exploring affect and attachment as a practice of care toward people rather than institutions, and in exploring ways to actively create collaborative queer communities in conversation with the ancient world. We aim for these communities to fully grapple with the racist and colonial underpinnings of Classical Studies, allowing for potential sites of radical queer identification, thinking, and feeling. This work can only be done in collaboration within the wider set of critical theoretical positionings, e.g. critical reception studies (Hanink 2017).

Key to any critical engagement with Classical Studies is challenging and making visible what counts as knowledge in the field, as well as asking who and what such epistemologies have historically excluded. Following Critical Ancient World Studies (Umachandran & Ward 2020), it is crucial that any ‘commitment to decolonising the gaze of and at antiquity’ avoids ‘simply [...] applying decolonial theory or uncovering subaltern narratives in a field that has special relevance to the privileged and the powerful’. Instead, we must begin ‘by dismantling the structures of knowledge that have led to this privileging’.

Instead of asking what can queer theory bring to the study of Classical Studies we therefore want to ask: what can a critical study of the ancient world contribute to queer activism, queer ways of knowing, and most of all, queer people? What can our engagement with the queer and the classical do to re-conceptualise our position within universities, and dismantle those institutions which harm us, while also caring for the people in our networks of affinity, kinship, and solidarity? Which ‘transhistorical elective affinities’ have proven so far good to think with, and which have not? (Matzner 2016).

Our objective is then to bring together young researchers and artists in the field, in order to bring about new and radical ways to imagine, think, and feel future engagements with the queer and the classical. We welcome proposals, up to 250 words, for twenty-minute papers, provocations, performance-lectures, and responses of any medium, on all periods and notions of queer and the classical alongside their receptions. Themes might include but are not limited to:
• The affective genealogy of and reason behind the need for a study of queerness and the classical.
• The future of ethical relationships between queer and trans studies, disability studies, feminist studies, and especially decolonial and anti-racist approaches.
• The role of the queer researcher/practicioner within institutions more broadly (e.g. the disruptive potential and positionality of queer studies within Classical Studies departments today), and the embodied reality of inhabiting such institutional fields (the gallery, museum, university, theatre, archive) as well as interrogating which embodiments have been neglected and ignored.
• The role of affect and care in identity formation within the academic world of classics, including ‘bad feelings’ (Love 2007)— e.g., queer shame, queer nostalgia— which have contributed to the unsavory disciplinary formulations of classical and queer studies (Amin 2017, 2020)
• Disruptions and assemblages of the ‘classical’ across literature, music, art, dance, etc., especially outside the academy, such as in popular culture, DIY, underground, and nightclub spaces.
• The potentialities of the queer and the classical toward the creation of new scholarship communities and citation networks.

Please send all submissions (as attachments) to oxfordqueerclassical@gmail.com .