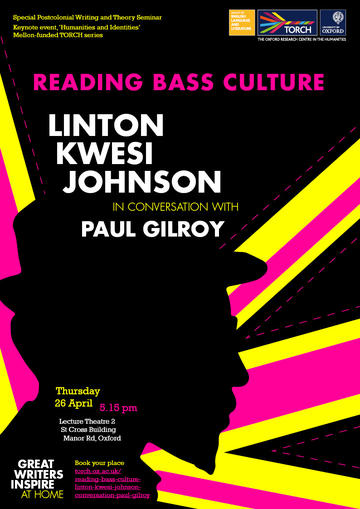 On 26 April 2018, Linton Kwesi Johnson will read a selection of his poetry and then talk about his life and work in a dialogue with Paul Gilroy. This special gathering of the Postcolonial Writing and Theory seminar will explore the formation and development of Johnson’s poetry and the inter-generational and transatlantic relationships that nurtured it and shaped its political underpinnings. In particular, we’ll consider the special significance of music in his development, the lyricism of  “dub poetry” and the distinctive approaches to recording and performance that he has developed in the forty years since the release of “Dread Beat and Blood”.

Linton Kwesi Johnson is an acclaimed Jamaican-born British poet and performer. He coined and popularised the term dub poetry, a form of performance-based oral poetry inspired by reggae music. In 2002, he became only the second living poet published in the Penguin Modern Classics series. As well as having released several commercially successful and classic albums as a reggae artist, Johnson’s volumes of poetry include Voices of the Living and the Dead (1974), Dread Beat and Blood (1975), and Inglan is a Bitch (1980).

Paul Gilroy is Professor of American and English Literature at King’s College London, a foundational figure in the field of Black Atlantic Studies, and a world-leading scholar in cultural studies and the music of the black diaspora.

The talk will be followed by a drinks reception.