Remembering the Jagiellonians: A Book at Lunchtime 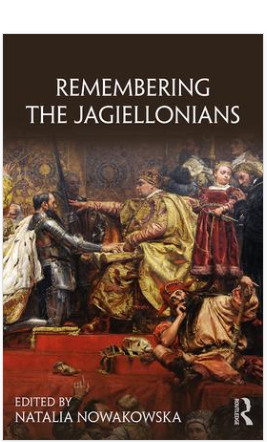 Alongside the Renaissance dynasties of the Tudors, Valois, Habsburgs, and Medici once stood the Jagiellonians. Largely forgotten in Britain, their memory remains a powerful element within modern Europe.

Remembering the Jagiellonians is the first study of international memories of the Jagiellonians (1386–1596), one of the most powerful but lesser known royal dynasties of Renaissance Europe. It explores how the Jagiellon family has been remembered across Central, Eastern and Northern Europe since the early modern period. The book considers their ongoing role in modern-day culture and politics and their impact on the development of competing modern national identities

Offering a wide-ranging panoramic analysis of Jagiellonian memory over five hundred years, this book includes coverage of numerous present-day European countries, ranging from Bavaria to Kiev, and from Stockholm to the Adriatic. It explores how one family are still remembered in over a dozen neighbouring countries. Contributors use memory theory, social science and medieval and early modern European history to engage in an international and interdisciplinary exploration of the relationship between memory and dynasty through time.

Edited by Natalia Nowakowska, Fellow and Associate Professor in History at Somerville College, University of Oxford, and Principal Investigator of the European Research Council (ERC) funded project ‘Jagiellonians: Dynasty, Memory & Identity in Central Europe’. Her previous publications include King Sigismund and Martin Luther: The Reformation before Confessionalization (2018) and Church, State and Dynasty in Renaissance Poland: The Career of Cardinal Fryderyk Jagiellon (1468–1503) (2007).

Natalia will be joined an expert panel to discuss the book and its themes: