The Poetic Arts of Africa: Creative and Critical Voices, with Kwame Dawes 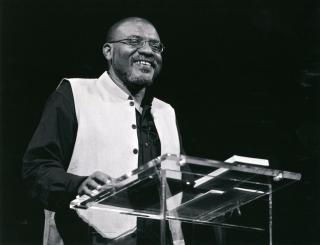 This discussion with TORCH visiting professor and prize-winning poet Kwame Dawes will range widely across a number of critical issues in contemporary African poetry and publishing. The panel will consider the emergence of the American influenced spoken word movement; the connection between activism and performance; the international reception of African poetry as compared to African fiction; and the initiatives being taken to advance African Poetry.

Professor Dawes will be joined by JC Niala, Nana Oforiatta Ayim, and Belinda Zhawi. The panel discussion, 5:30 - 6:30, will be followed by a drinks reception in the North Mezzanine, 6:30 - 7:30, to launch the African Poetry Book Fund exhibition.

If you prefer not to use Eventbrite, you may respond directly to katherine.collins@humanities.ox.ac.uk.

Kwame Dawes is Chancellor’s Professor of English at the University of Nebraska-Lincoln, the Glenna Luschei Editor of the literary magazine Prairie Schooner, and a chancellor of the Academy of American Poets. His many honours include the Forward Poetry Prize for Best First Collection, a Guggenheim Fellowship for Poetry, the Musgrave Silver Medal for contribution to the Arts in Jamaica, the Poets & Writers Barnes and Noble Writers for Writers Award, and a Pushcart Prize. In 2009 he won an Emmy Award for Live, Love, Hope, a multimedia performance poetry and music piece that explores the lives of people living with HIV AIDS in Jamaica. His works of poetry, fiction, plays, and criticism include: City of Bones: A Testament (2017), Duppy Conqueror: New and Selected Poems (2013); Bivouac (2010); She’s Gone (2007); A Far Cry from Plymouth Rock: A Personal Narrative (2006); and Bob Marley: Lyrical Genius (2003). He is co-founder and programming director of the biannual Calabash International Literary Festival in Jamaica, and founding director of the African Poetry Book Fund, which advances the development and publication of the poetic arts of Africa.

JC Niala is an award-winning poet and playwright Her work is regularly produced in Kenya, the U.K. and the U.S. A keen practitioner of public engagement with research, she grounds her creative work in historical and anthropological research. Research themes include work carried out with urban refugees culminating in a film Wazi ? FM (2015) which won several awards including Best Picture at Zanzibar International Film Festival and an EU Award for promoting peace and cultural understanding. She has an MSt in Creative Writing from Kellogg College, University of Oxford. JC’s counter-colonial approach to African history has led to research on African women leaders and African Soldiers in WW1. Her podcasts are featured on the University of Oxford’s iTunes educational channel. She received a Community Engagement and Academic Merit Award for this work. JC’s research centres on the urban context and she has been published in varying journals including the Africa Theatre Journal and the Journal of Museum Ethnography. She is currently the Community Manager of the African Women Playwrights Network.

Nana Oforiatta Ayim is a writer, filmmaker and art historian. In her work, she has sought to understand the various relativities of cultural contexts, and to give voice to that understanding in a way that speaks to both the actors and communities of that context, as well as the wider world. She is director of the ANO Institute of Arts & Knowledge, through which she has pioneered a pan-African Cultural Encyclopaedia, reimagining narratives from across and about the continent; and a Mobile Museums project that travels into communities, collects material culture and exhibits them in those communities, creating discourse about narratives, memory and value. She has spoken widely on cultural narratives and institution-building in Africa, in institutions like the British Museum and Cambridge University. She has written for publications like frieze and African Metropolitan Architecture, and is publishing her first novel, The God Child, with Bloomsbury Publishing in  2019. She has also made several films, a cross of fiction, travel essay, and documentary, that have been shown at museums like The New Museum, Tate Modern, and LACMA.

Belinda Zhawi is a Zimbabwean-born writer and educator who lives and works in London. Her work mostly focuses on memories of living in rural and urban Zimbabwe. She has performed across the UK in numerous venues, festivals and events including at Africa Writes, Bestival and TATE, with her work published in the anthologies LIMINAL ANIMALS and CASAGRANDE: RAIN OF POEMS. In 2013, Zhawi featured on Channel 4’s Random Acts and also co-founded the monthly poetry night, BORN::FREE. Zhawi was Associate Poet at the ICA from Autumn 2016 –Spring 2017. Her pamphlet, Small Inheritances, was published by Oxford Brookes Poetry Centre's ignitionpress in October 2018.