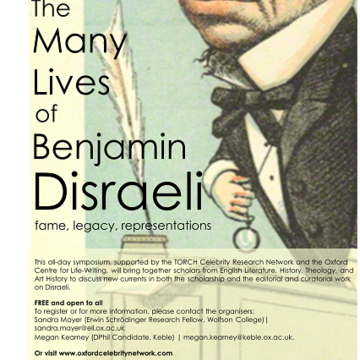 On 24 March 2015 an interdisciplinary symposium dedicated to ‘The Many Lives of Benjamin Disraeli: Fame, Legacy, Representations’ will take place at The Oxford Research Centre in the Humanities. The event, supported by the TORCH Celebrity Research Network and the Oxford Centre for Life-Writing, will bring together scholars from English Literature, History, Theology, and Art History to discuss new currents in both the scholarship and the editorial and curatorial work on Disraeli.

The extraordinary career of Benjamin Disraeli (1804-1881), which forged intersections between political action, visionary leadership, creative achievement, and romantic self-invention, has not ceased to capture popular imagination and has affected his afterlives in cultural memory. As a best-selling novelist, flamboyant dandy, notable wit, ethnic outsider, and icon of Conservative politics giving rise to a powerful political myth, his multifaceted public persona has become emblematically associated with various aspects of Victorian literary, political, visual, and material culture. Recent Disraeli scholarship has been instrumental in widening the perspective on his life and career, illuminating the cross-fertilisation between his fiction, political and social thought, Jewish background, celebrity status, and psychology. Disraeli’s breadth and versatility as one of the most conspicuous and prominent nineteenth-century public figures, writers, politicians, and thinkers calls for a holistic, multi-disciplinary approach to his life and work. This symposium will facilitate a broad discussion of Disraeli’s many parallel (after)lives, representations, and his intellectual legacy within his Victorian contexts and beyond.