There is something powerful about shouting “Black Lives Matter” through iconic Oxford and along streets lined with weekend shoppers. There is something powerful about saying those three simple words and for a moment disrupting the quiet intellectual calm of students and the reverence of tourists faces and cameras turned up to capture the Bodleian and the Bridge of Sighs.

Over 250 students and local community members came out in support of the Oxford to Ferguson: Black Lives Matter solidarity march on Saturday, November 29th. The march went up Cornmarket Street onto Broad Street and ended at Radcliffe Square. We started organizing the event over three weeks ago in anticipation of the grand jury announcement and in solidarity with the Ferguson community that has been struggling and resisting since the night of Michael Brown’s death on August 9th.

Saturday’s march through Oxford was deeply moving. At Radcliffe Square, marchers gathered with signs to hear the moving poetry of Annie Teriba and Danez Smith (Josh read Smith’s poem Dear White America) and the reading out of names of the hundreds of unarmed black people killed by police in the U.S. and the U.K. Speakers connected the issues going on around Ferguson to issues of police violence in Britain, racial profiling, deaths and violence in prison and detention centres across Europe, and the recent withdrawal of the UK from the Mare Nostrum programme – a European initiative to rescue boats carrying migrants from Africa.

The killing of unarmed black teenager Michael Brown by white police officer Darren Wilson has become a flashpoint moment across the United States that has put issues of race, police brutality and protest center-stage. The final announcement from the state prosecutor that Darren Wilson would not be tried felt like the fatal twisting of a knife in the side of the Ferguson community and its supporters. Saturday’s march was part of a network of demonstrations across cities in the United States and around the world including London, Glasgow, San Juan, Oslo, Toronto, Montreal, Calgary, and Tokyo.

Nicole Nfonoyim-Hara is completing her MSc in Migration Studies and working on a project examines how recent policies in New York City construct citizenship and belonging for undocumented migrants.

Josh Aiken is completing his MSt in History and working on a project that compares nonviolent direct action tactics during the civil rights struggles in the United States and Northern Ireland.

Please click here to watch a video of the march (filmed by Margot Leger). 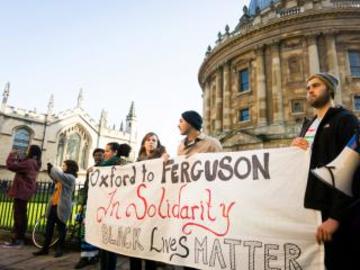