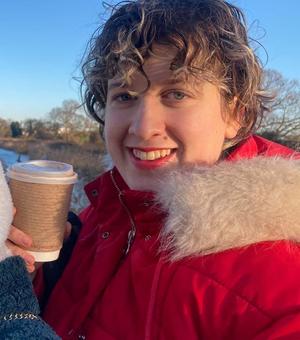 Bridie graduated in 2020 and is currently working at an adventure playground for kids and young people with disabilities as well as continuing to make drawings and videos.

Extract from a conversation in 2019:

What were you doing before I got here?

I was listening to a song on repeat for about two hours, which I can do for some reason.

I do that as well, like the same song over and over again

Do you think that is something dyslexic? - and I still don’t remember the lyrics. I am good at the storyline - less good at the words.

How do you feel about dyslexia and dyspraxia?

I feel I have quite a complicated relationship with it. I can’t separate it from:

My relationship with that gets all jumbled - so I feel a bit strange about it. So, there is one of thinking oh it’s not a ‘real disability’ or feeling very indulgent calling it that in contrast. I think I have internalised a lot of my sister’s disability so I feel in some ways it has disabled me- so its kind of weird to have your own separate thing as well - I can’t help but feel it was maybe even caused by that.

My mum pointed this out- when I am saying I jump in from a kind of the random point - and a lot of times people are like wait wait wait - I assume a lot of things and go from one to another - but I quite like that, put them in the deep end straight away - more exciting.

On essays, the feedback I get is they say I always write in a very direct way, they always compliment that - and that is partly because I am not that confident with the grammar, so I am quite a boom boom boom and I think I am quite direct in real life.

What was your diagnosis?

My diagnosis was ‘unspecified learning disability’ - which is kind of frustrating. They said you have a lot of the symptoms of dyspraxia - but we would need to know more about your past- so they asked questions about bottom shuffling, struggling with buttons - but they needed a bit more of the information and they said you have a bit of dyslexia- but I actually got tested before, at school, it wasn’t a very good test. It was very short and having to spell things like cat- quite easy things. So I didn’t have it. I got diagnosed with it last year - but my mum always thought there was something, I don’t know, I guess that’s why I am like, I didn’t get it the first time, so maybe…. It’s not actually true - I was a bit hungover when I did the test, maybe I just wanted a diagnosis and I don’t have it.

So you got assessed at uni?

Yes. I definitely feel like I struggle with stuff and find it harder but part of me feels it might be self-inflicted somehow. I am finding this organisation so difficult, and my room is a mess - but I could do more as well, how much is an isn’t it?

I could still do pretty well, partly because my family were really supportive as well. So stuff at school that I found difficult, my older sister could help and stuff like that - testing me through.

It all does take a lot longer. I remember with spelling tests - me and my mum would practise the spellings for hours every day, think of different ways like B-E-C-A-U-S-E, all these different things that I would still get 60% and my siblings would be acing it.

What I find hard is actually disclosing it, because I always feel a bit like indulgent- like I forget my bodcard (key to getting into university buildings) and people get cross, and I do want to say that I am dyspraxic or dyslexic and it’s something that I genuinely really struggle with - I am on my fourth bodcard.

My dad has tried to get me to do this ‘personal protocol’ - make sure you have your wallet, phone, card, keys. But I just leave my door on the latch - I don’t have keys, my door is always on the latch so the porters have a spare key that I will take. What else? I’ll be great in our house next year.

I think what I found difficult in relation to dyspraxia this term was the fact that - with the internship thing, me not replying quick enough because I was intimidated by the form - did I tell you about that? They pulled me out and now I am having to organise it all myself. I emailed one person, and they said to write to this person - and it creates extra organisation. The uni Internship offering for art doesn’t really have anything interesting so I have my head in the sand about it - but maybe I should contact them again.

What they said is that I should have disclosed it first. Going back to disclosing, saying ‘I have dyspraxia I should have explicitly said it before or something’ but when do you tell people?

I don’t - but I did hand in an essay where I had spelt the artist’s name 7 different ways, I just said I would be more careful next time! I am starting to tell people more readily now though.

I say ‘I am dyspraxic’ and they say ‘oh what does that mean’ - and I always get a bit confused because I am not really clumsy which is what people usually think it’s about and I kind of don’t like saying it.

Can you think of anyways that dyspraxia/dyslexia and having a mind that works differently might have helped what you are doing now?

I think it really benefits my artwork because I feel the way I work through things is really long - and I really have to get super into it, really bite on and go through, and excessively long with essays but with art, it is kind of perfect.

I think it has given me a way of thinking that I really appreciate - it’s good to think about the positives.

Would you say you struggled in school?

I would say I have had to put in a lot more - I have always been very slow and had to put in a lot more effort to just get a grade or whatever, to get the information in - memorising science stuff, I feel like I have had to work really really hard - I feel like I get a lot out of that in art but in other subjects, it is just painful - like biology. I really liked English as well. I don’t think I could have dealt with having the assessment at that time, it was quite a step for me to go and get the assessment just cause for me I really didn’t want to - for me, my sister having Down’s Syndrome made me feel like how could i have anything?

It would have been good to have that extra support though.

I think disability is so stigmatised - and I definitely felt that within my own family in regards to my sister’s disability and I didn’t want to have anything “wrong” with me. so it is something that you almost push away and don’t think about.

Also, why is slower worse?

I remember a lot slower in primary schools and being way down on the biff and chip books, I definitely felt like I was struggling quite a lot - but then there were people with difficult home lives but didn’t have the same amount of support at home. I did find school difficult, and I don’t know if it affected the social side.

I don’t know if this is just me - the thing I find difficult is the organisation of social activities. I think everyone feels insecure within friendships sometimes, but I just messaged a couple of people -

Do you feel stressed when you are sending a message?

It depends. I think I have had more stress socially in terms of making plans, but when I'm with people that I get on with I really enjoy that. Planning stuff to do in the summer, I don’t know - its something I am continually working on. I feel some people are so casual with it, but that gives me anxiety and I think I got quite homesick when I was younger, I was a lateish bedwetter - I don’t know if that is related. I get really anxious about things quite in advance, which is maybe surprising because I feel I try and give quite a blaze persona maybe. I can also feel very confident in the actual interactions but also yeah I do get anxious around it too.

How have you found it at uni with the support services?

I think that there is really good support here - what I have found quite hard about the support is that you have to seek it out.

It is quite a long process getting the assessment - I still haven’t done the technology stuff, I am just intimidated by it.

With the help, you also have to be organised- you have to go to the tutor with something to work on which I am capable of doing, but you have to put in a lot for the help so I think in a way it is not made super easy - it’s not difficult but it is an extra effort.

What made you get an assessment?

I was just really struggling with the essays and wanted to get some extra support- I wanted to know if there was something wrong with me if I was finding things disproportionately hard so I wanted to figure out what was going on - I was very encouraged by my mum, I probably wouldn’t have done it if she hadn’t been asking me about it for about 6 months.

There are different levels of discriminations… and I feel like one is ‘oh come on’ that is an attitude a lot of people hold with it.

Also as an added thought I’m sure a lot of people with dyslexia and dyspraxia haven’t been able to get into this institution because they have been let down by schooling and provisions and basically non-inclusivity.

will there ever be enough help support or restructuring of the tightness of the academic world to allow someone with more socially/academically isolating learning disabilities such as my sister who has Downs Syndrome and is an amazing creative thinker and drawer who would have been an amazing addition to Fine Art cohort here for example.