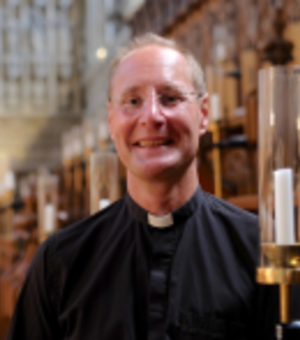 Jonathan Arnold is Dean of Divinity of Magdalen College, Oxford. He read theology at St. Peter’s College, Oxford, singing at the Royal Academy of Music and has a PhD in English pre-Reformation Church history from King’s College, London. Before ordination he was a Vicar-Choral (singing bass-baritone) in the choir of St. Pauls’ Cathedral for eight years and was a regular member of The Sixteen for fourteen years, appearing on many tours, recordings and broadcasts. In 2007, Jonathan appeared in a five-part television documentary on sacred music with the actor Simon Russell-Beale and The Sixteen. He trained for ordination at Ripon College Cuddesdon and became Chaplain and Senior Research Fellow at Worcester College, Oxford in 2008. He is a Fellow of the Royal Historical Society and teaches late-medieval and early-modern ecclesiastical history for the Theology Faculty as well as convening an interdisciplinary seminar series on ‘Music and Theology’. In 2014 he was also co-founder of a new girl choristers’ choir for Oxford, Frideswide Voices, which is the first choir in the history of the university to offer girls, aged 7-13, the opportunity of being a chorister and singing services in Oxford College Chapels. His current research project is Music and Faith: Sacred Music and its Audience (Forthcoming, Boydell and Brewer, 2018). Other publications include Sacred Music in Secular Society (Ashgate, Autumn, 2014); The Great Humanists: An Introduction (I.B. Tauris, London, 2011); John Colet of St. Paul’s: Humanism and Reform in Pre-Reformation England (I.B. Tauris Press, London, December, 2007).