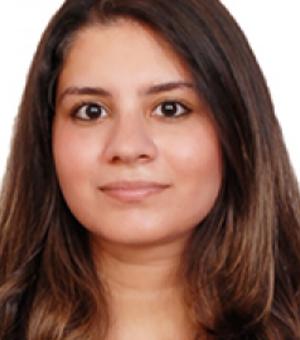 Nur Laiq is a public policy practitioner. She has sought to investigate the combustible power of identity and politics, based on her experience in the political and policy arena. Her research aims at bridging the gap between academia and policy.

Nur has worked on policy with political parties in India and Britain. She co-drafted the manifesto of a national party for the 2019 Indian general election, was a parliamentary researcher in the House of Commons, and campaigned for Obama in the primaries and presidential elections. She has worked in the UN Department of Political Affairs, Policy Planning Unit, New York, with a focus on sustaining peace – the idea that nations need to continuously invest in the fundamentals of inclusion and equality to keep war at bay. She has served on the UN Advisory Group on Youth, Peace and Security, appointed by the UN Secretary-General.

Nur has been a senior policy analyst at the International Peace Institute, New York, a stagiaire at the European Commission DG External Relations, Brussels, and a visiting fellow at the Centre for Policy Research, New Delhi. She has an MPhil in Modern Middle Eastern Studies from St Antony’s College, Oxford and studied Arabic in Damascus and Persian in Tehran.

Her publications include Talking to Arab Youth: Revolution and Counterrevolution in Egypt and Tunisia (New York: IPI, 2013), based on fieldwork with social movements and political parties across the entire ideological spectrum, following the 2011 uprisings. She is co-editor of The Search for Peace in the Arab-Israeli Conflict (Oxford: OUP, 2014), which offers a toolbox of mediation options, based on documentary history and interviews conducted with Arab, Israeli and American stakeholders. Nur has been a member of the UN advisory group for The Missing Peace: Independent Progress Study on Youth and Peace and Security (New York: UN, 2018) and the Center for American Progress task force for The United States and India: Forging an Indispensable Democratic Partnership (Washington, DC: CAP, 2018).

Drawing on her experiences, Nur is working on a book project on the new varieties of liberal responses to new strands of populism and the politics of identity, justice and equality. She seeks to explore the flammable properties of grievance, aspiration and insecurity and the power of narratives in these situations, based on her work on the ground. She sifts through the changing discourse around inequality and identity as the idea of civic nationalism faces grave challenges in both the Global North and South. Her study of shifting political assumptions and practices necessarily takes an interdisciplinary approach.

Nur’s knowledge and expertise are welcome at TORCH and are a timely contribution to work on the future of identity, and consequently the future of democracy, peace and security.