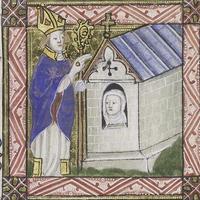 Six centuries ago, after having lived through three waves of a pandemic, the earliest known English woman writer assured her readers that "all shall be well."

These words by Julian of Norwich (c. 1343 – c. 1416), expressed in her Revelations of Divine Love, have offered hope to many during the Covid-19 crisis, with both academics and non-academics noting parallels between her life as a recluse and life during lockdowns.

In a premiere open to all, embedded in a Julian conference to be held at Somerville College from 15 to 16 July 2022, the one-woman play "Cell", created by writer, director and performer Cindy Oswin, allows this medieval mystic to speak to the twenty-first century and vice versa. "Cell" examines the impact of ageing on Julian's theological vision, with an immersive medieval soundscape recreating what Julian may have heard from her anchoritic cell. This specially composed piece collated by a sound designer will create the continuous atmosphere of medieval sound – street cries, carts, bells, music and plainsong.

Instead of a serene, disembodied Julian, “Cell” shows a doubting Julian, struggling with the physical limitations of old age, surrounded by the bustle of a late medieval city and dealing with the demands of her community. A Q&A will follow the performance, in which the performer's creative expertise, researchers' scholarship, and general audiences' perspectives will forge novel ways of approaching Julian and allow the performer to expand the play. The performance also provides an opportunity for the artist, academics and the general public jointly to investigate Julian's many roles in our society today.

Cindy Oswin will create the play in dialogue with four experts, Antje Chan, Godelinde Gertrude Perk, Raphaela Rohrhofer and Alicia Smith. This co-development of ideas combines scholarly and creative approaches: conversations between the researchers and performer, an on-site try-out, and post-performance discussion with the audience will draw on and inspire emerging scholarship.

After this performance, the play will continue to examine Julian's relevance to our world, with new performances scheduled at the British Library and other venues. On the basis of the play's recording and audience feedback, new, modern characters will be added to it, knitting together past and present.