A mild, rainy day in late May saw around 20 participants gather for A Buzz in the Woods, the first in a series of outdoor events hosted by SciPo in 2019. This event – half bee walk, half poetry workshop – took us into Wytham Woods, a large woodland owned by the University of Oxford. I was there to produce a soundscape recording, a kind of ‘slow radio’ programme based on the sounds of bees and participants’ poems. My current research explores responses to environmental crisis among contemporary musicians in the UK, so the SciPo event offered a chance to explore how people other than musicians are listening to environmental change. However, the wind and rain put pay to any hope of a viable recording: bees were few and far between, recording in blustery conditions is notoriously difficult, and I feared that the rain might damage my borrowed recording equipment. Despite all this, there was much to listen to on the day.

We met in the Wytham Woods car park for introductions to our guides: Sarah Watkinson, poet and Emeritus Research Fellow in Plant Sciences at Oxford University; Tonya Lander, Researcher in Plant Sciences at Oxford University and leader of the Oxford Plan Bee initiative; and Emma Eatough, an MSc student at Imperial College London and, along with Tonya, our other bee guide for the day. Tonya and Emma then led us on the walk: through a gate and uphill through an open meadow, where we gradually spread out to look – and listen – for bees. As Tonya explained, you sometimes ‘hear the bees even before you see them’. The weather slowed our search, but we found a few, especially after we left the meadow and entered more sheltered areas in and around the edge of the woodland. Some of us were given nets so that we could safely catch the bees and small plastic collection pots that allowed us to examine them close up – pots that would hum like tiny organ pipes once the bee was inside. When the sun emerged and the wind died down, more bees appeared and we quickly became caught up in the small thrill of catching and watching them, with Tonya and Emma standing by to identify particular species and answer questions. As they did so, names like Bombus lapidarius (Red-tailed bumblebee) offered themselves up as resonant, sometimes onomatopoeic labels for what we were seeing.

There is, of course, a huge amount to learn about bees – types, behaviours, lifecycles and more – and our guides’ clear and patient explanations meant we came away knowing (at least in my case) much more than when we arrived. But the day also begged the question of why we might want to learn about bees, let alone write poems about them. A Buzz in the Woods represents part of a much broader movement to raise awareness of the environmental problems facing pollinators and to encourage work on habitat restoration and so on. Some, like the Oxford Plan Bee initiative, are ‘citizen science’; others, like A Buzz in the Woods, combine scientific and artistic dimensions, predicated on the idea that cultural activities can promote public engagement with environmental problems. Wytham Woods itself has been home to several such initiatives, including Wythamscapes, a music and soundscape project, and a series of writing workshops co-ordinated by Sarah Watkinson, recently appointed as Wytham’s first Writer in Residence. Forestry England (part of the Forestry Commission) has, likewise, recently chosen two ‘Writers in the Forest’ to celebrate its centenary. Scientific and land management organisations are increasingly turning towards art and artists (or in Sarah Watkinson’s case scientists-turned-artists) to act as spokespeople and advocates for more-than-human spaces.

Our walk took us to Wytham’s newly-built chalet building, where we had lunch and soon met poet and playwright Jenny Lewis, who would lead the main poetry workshop, focussed on sonic effects. She began by asking us to repeat sounds as a group, testing how it felt to voice particular vowels and consonants, then talked us through a range of widely used sonic devices: assonance, alliteration, rhyme, meter, and more. After a group recitation of Gerard Manley Hopkins’ famous sonnet ‘The Windhover’, which illustrates many of these effects, we read and discussed two poems that matched the theme of the day, ‘The Hive’ by Jo Shapcott and ‘The Bees Have Been Cancelled’ by Maya Catherine Popa. Unsurprisingly, both poems turn an ear to the sounds of bees, and where the narrator of Shapcott’s poem appears herself to become a beehive (‘The gaps between my bones filled/with honeycomb and my chest/vibrated and hummed’), Popa’s narrator laments their loss (‘I’ll miss the noise, the palimpsestic clamor, soft shock of discovering a hive under your roof’).

The juxtaposition of these two poems captured an ambivalence that haunted much of the day. Participants set to work composing or refining their own poems, spending time outdoors observing, then indoors redrafting. Jenny suggested people experiment with building a poem based on the phrase ‘Never again’, which opens Popa’s poem (‘Never again the humming, saddled flowers’). The day ended with participants reading their new poems out loud. As they did so, phrases, facts and species names from earlier in the day resurfaced: one mentioning Bombus lapidarius, another the fritillaries seen in the wood, another reworking Tonya’s comment: ‘Never again will you hear the bees even before you see them.’ Despite diversity of style and approach, together the poems evoked a strange mixture of emotions: on the one hand, the pleasures of a morning outdoors, learning new things, meeting new people, making time to pay attention to the world; on the other, fears and regrets around environmental damage, with bees serving as signals for much broader and deeper societal problems. Such ambivalence is arguably characteristic of our current historical juncture. Those of us privileged enough to live in places and circumstances far from the sharpest edges of environmental crisis are nonetheless well aware of the problem, yet troubled by its scale, doubtful of our own agency, not to say uncertain of the purpose or value of art in the face of such worries. Of course each participant will have experienced these issues differently, and the workshop in no way attempted to resolve these difficult questions, but it did provide an opportunity to give voice and listen to this ambivalent hum surrounding even a walk in the woods.

Dr Joseph Browning is a British Academy Postdoctoral Fellow in the Faculty of Music, University of Oxford and St Hilda’s College, Oxford. 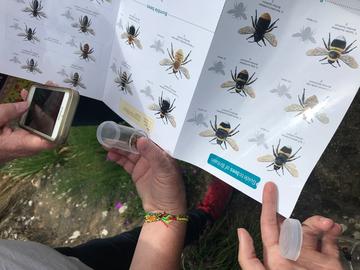