A Tribute to Eric  Anthony Abrahams – by his sister

Eric Anthony Abrahams was a Jamaican Rhodes Scholar who came to St. Peter's College, Oxford, in 1962, to study Law. He served as President of the Oxford Union in Michaelmas Term 1964 (the second student from the Caribbean to hold that office). Abrahams invited Malcolm X to speak at a Union debate on December 3 1964. Abrahams also spoke at that debate. Fifty years later, at an event to commemorate the visit of Malcolm X to the University, his sister Hope Abrahams Calogero reflected on her brother’s time at Oxford:

My name is Hope Abrahams Calogero. I am the younger sister of Tony Abrahams.

50 years ago today, I sat in the Oxford Union listening to Tony and Malcolm X talk on the subject of extremism , liberty and justice.  I'm not the orator that my brother was, and I've had a stroke that affects my speech. However, I could not pass up the opportunity to honour my brother's memory with a few reflections.

I had come two years before that historic moment to a debate at the Oxford Union, at my brother's invitation. It meant a lot to Tony that I be there. He used to say: I was his apple and he was my apple tree.

At the time I was overwhelmed by the poshness and whiteness on display. We had dinner, then listened to the debate, after which Tony leant across and he whispered to me: "I'll be president of the Oxford Union before I leave here and I'll fill the place with blacks".Such was his intention, right from the start to challenge the racial exclusiveness of the University.

This prophecy seemed like a shocking statement at the time, and an impossible dream.  I never thought that a black man could become a leader in such an environment.At the same time, however, nothing surprised me about Tony.

His early successes came one after the other. At school in Jamaica, he was head boy, and captain of many teams, including those of debating, cricket and athletics. After leaving school in 1958, Tony furthered his debating and leadership skills at the University of the West Indies (UWI), which was at the time a college of the University of London, where he studied politics and economics and chaired many clubs and societies.

His sense of social justice started in his early days as an undergraduate.In 1960, in Kingston, Tony participated in demonstrations against the import of South African goods. Singled out as having leadership potential, he was the perfect candidate to become a Rhodes scholar.

And so it was, that with the scholarship in place, in 1962, Tony went up to Oxford to study jurisprudence. And true to his word, within two years, he had been elected President of the Oxford Union.

Tony had already gotten into trouble with the authorities at Oxford for demonstrating against the South African apartheid regime, in particular on the occasion of a visit by a South African diplomat to the University at the request of the Oxford University Conservative Party.  Tony was gated and initially rusticated before further student protests forced the proctors to revoke the rustication. This was before his presidency had even started, in the summer of 1964.

It was a time when the Establishment in Britain was in support of the South African regime.   However, the brand new Labour Government, led by Harold Wilson, had rushed through a ban on the sale of arms to South Africa as part of an election promise weeks before the debate took place.

My brother wrote this letter home shortly before the debate:

OXFORD UNION SOCIETY     From the President

My dear Dad and Mum,

Well I have started.

Today order returned to my life as I covered a good deal of work. …

I still haven’t arranged my own farewell debate as yet.

I am supposed to invite the person whom I most admire. But I can’t really think who that is.

…I am gated says the Proctor. Anyhow I have a plan for them….

Hope may have mentioned that I have been doing some campaigning for the Labour party. You never know I may yet be the first black minister of government here. Impossible???

Humility was not one of his strengths….

For those of you who do not know, my brother did not run for a ministerial position in England (as he jokingly said in his letter home), but took his skills, talents and education back to Jamaica where he made a huge mark. He became a Minister of Government there, and used his political and speaking skills to set up, with Beverley Anderson-Manley, a pioneering radio programme on current affairs.

Coming back to the Oxford days, my brother knew that he was living an important moment in history, and seized the opportunity to make the most of his platform as President of the Union.  I am sure that it was this, along with a strong anti-colonial sentiment that influenced his decision to invite Malcolm X for his farewell debate.

It was a stroke of genius and wit, to choose the motto of Barry Goldwater, an arch conservative republican, as the motion for Malcolm X to support: “Extremism in the defence of liberty is no vice, moderation in the pursuit of justice is no virtue…” . It was to provide the framework that Malcolm needed to deliver one of the most refined and brilliant of all his speeches.

50 years on from that historic event we can finally appreciate its significance in the history of race relations in Britain. It brought into focus the question of race and human rights in an unprecedented way.

It could be said that, by inviting Malcolm, Tony gave a fresh impetus to the decolonization of the Union and of the wider British society. In particular, his actions, protests and negotiations over his subsequent punishment, broke the hold over race relations that the University Establishment had previously held. He therefore set a powerful precedent for future campaigners. The real impact that Anthony had at Oxford was the staging of this debate. He effected a change the British public should be proud of.

That took courage; that took vision. That was my brother.

Please click here to listen to a radio documentary on Malcolm X's visit to Oxford, which includes interviews with Hope Calogero and recordings of Eric Anthony Abrahams. 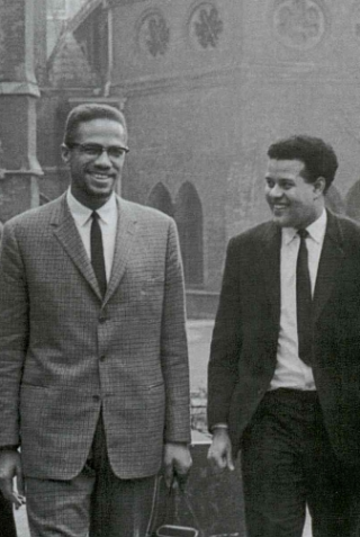