A vision of hope from ‘Hopelessness’

Ellen Dunn explores Anohni’s use of lip-synching screen-projections in her album ‘Hopelessness’, considering her concealment of her trans female body as a vehicle to reveal her voice.

Ellen Dunn is a violinist who has just completed her BA in Music at New College, University of Oxford. During her degree she particularly focused on capitalism and the way its logics impact upon female-identifying artists.

In my experience, there are few albums that have become radically changed upon witnessing a live performance. However, Anohni’s 2016 ‘protest’ album ‘Hopelessness’ is one of those exceptional few. This is why I would argue her performances are increasingly relevant in promoting resistance to systems of oppression, challenging passivity, and inspiring hope through bringing visibility and a voice to marginalised women.

Anohni’s reincarnation from her previous musical moniker ‘Anthony and the Johnson’s’ catalysed a renewed intention both politically, personally (as a trans woman), and musically.  Her debut album ‘Hopelessness’ is a political manifesto for change. Her frustrated response to the complicity and failures of world leaders is a plea for engagement with issues such as climate change denial, regressive civil rights and increasing surveillance.

The most intriguing thing about Anohni’s music and performances  (I recommend watching ‘Drone Bomb Me’ as a starting point) is the way in which she politically navigates, displaces and reconstitutes her trans female body and voice. In this way, Anohni’s music and performances are inextricably concerned with paradoxes, displayed through concealing and revealing aspects of her body and voice. These paradoxes are also evident musically. Whilst on first listening ‘Drone Bomb Me’ appears to be an enticing and catchy pop song, lyrically and visually the song portrays a suffering Afghan girl perversely seduced by the prospect of her inevitable death by drone warfare. Draconian lyrics such as ‘blow my head off, expose my crystal guts’ pose a stark contradiction to Anohni’s alluring voice. Crucially, in the ‘Drone Bomb Me’ music video, Anohni’s body is absent and only her voice is heard. Her voice is performed and physically embodied by a lip-synching, crying Naomi Campbell, who captivates the viewer with her penetrative gaze.

Interestingly then, it is through the central paradox of Anohni’s bodily invisibility that she brings visibility. She conceals aspects of herself (her body) in order to reveal the power of her (crucially, trans female) voice as a vessel for bringing visibility to other women. Campbell assumes and embodies Anohni’s voice, invoking meaning and asserting authority over the viewer. The result is that the confrontational message of the song is no longer purely individual to Anohni’s body; instead Anohni states it is propelled to a ‘new level of universality’, as a ‘universal speech given by an icon of femininity’.

Anohni’s performance at the 2016 Edinburgh International Festival was particularly striking to me. In this visual-spectacle, Anohni also removes herself physically from the space. This is done in two ways: firstly, in the way she visually erases her performing body through wearing a full veil, and secondly, in the way that her voice is reconstituted and re-embodied by lip-synching and often unnamed women projected onto a vast screen behind her. The space between her and the projected women collapse as her voice extends beyond her body, becoming disembodied and then re-embodied. As such, her voice becomes an independent agent, reflective of all enraged but unheard marginalised women.

During these performances, the element of ‘liveness’ is somewhat distorted as Anohni’s labouring body is concealed, and an audience’s attention is focused on the screen-projected woman lip-synching Anohni’s songs. As a viewer, it feels more like watching a music video - except for the centrality of her voice. Indeed, the act of ventriloquism within this performance leads to a redistribution and complication of agency through the voice, as viewers become transfixed by the emotionality evoked by the lip-synching spectacles. Anohni lends her voice and her global platform to the performing spectacle in order to voice the projected women’s pain. For instance, her Edinburgh International Festival performance featured a projection of Ngalangka Nola Taylor, an Aboriginal woman, who after Anohni’s performance of ‘Why Did You Separate Me From The Earth’ is filmed in her own voice saying:

"We are wondering what is happening to the world, everything is changed, changing…is it going to get better, or getting worse? … how are we gonna work together and make the world a better place to live…all of us."

By lending her voice to those often unheard and presenting her live performances as a visual and aural spectacle, Anohni’s use of projections creates an illusory sense of spatial intimacy between the women on screen and the audience, invoking empathy for their suffering. This performative focus on lip-synching is reminiscent of drag, in the way that, in drag, performers lip-synch and embody the persona and voice of a (usually female) powerfully iconic vocalist. Similarly, through her performance and act of ventriloquism, Anohni’s voice - a trans female voice - adopts the position of the powerful vocalist, lending agency, power and political resistance to those she embodies or ‘envoices’. In this way, Anohni finds ‘strength’ in her bodily concealment as it propels her voice and music to become universalised and politicised, providing a platform for those who are silenced or neglected by society.

Anohni’s spectacle of performance erases her politicised trans female body, yet this paradoxically brings it visibility. In my view, Anohni’s album and performances have deeper resonances as they are mediated through her identity as a trans woman. In concealing her body and projecting her voice, Anohni transparently centralises her voice, rather than her body, heralding and inspiring hope for a time where all intersectional bodies and voices are respected and listened to. The voice is frequently a source of insecurity for trans people, (to put it crudely), a ‘give-away’ which can undermine their chosen and visually presented gender, whilst their bodies are questioned and scrutinised. Anohni’s ascendance of her voice, as opposed to her body, celebrates its power as a force to galvanise resistance against many forms of oppression and injustice, both personal and collective.

Whilst Anohni’s visual and aural centricity on her voice allows her voice to become plural, it also normalises trans voices, creating a vocal ‘euphoria’ rather than ‘dysphoria’. Through her voice, Anohni celebrates her trans identity whilst also demonstrating that her gender identity is not the defining element or purpose of her performance and brand identity. Instead, her voice becomes a vehicle to communicate collective, rather than purely personal female suffering. In using lip-synching projections Anohni is able to ‘lift [her voice out] of this hyper-personal space’, creating a singularity between the projected women and herself; reflecting an intersectional, diverse, and universalised female identity. In her words, this achieves the creation of ‘a fabric – a feminine oracle – combining many faces, [and] referencing many different points of view’.

Anohni’s performances and album are anything but ‘Hopeless’. In contrast to its name, the album subverts passivity through Anohni’s direct, enraging and benevolent call to arms. Her centricity on creating a collective female voice of resistance enables her to lend agency, bring visibility and representation to anyone whose suffering has been routinely ignored by systems of power. Sadly, in this bleak and turbulent time in global politics, Anohni’s transparent pleas for acceptance and reform appear to be increasingly and desperately relevant. Yet, the hopeful power of the voice prevails, and significantly - with Anohni - it is the unapologetic voice of a trans woman and those that her voice embodies, who are heard. 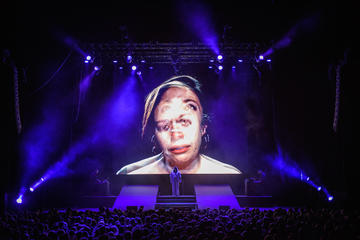