Funded by the Heritage Lottery Fund 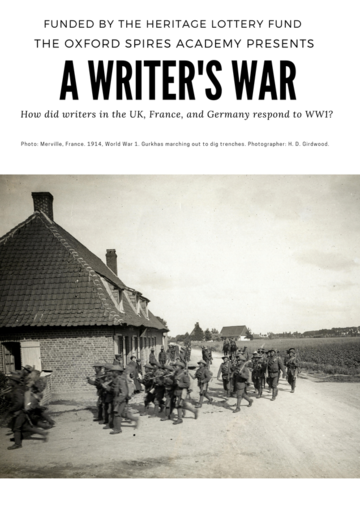 The Oxford Spires Academy’s project “A Writer’s War” was designed to examine how writers from the UK, France, and Germany responded to the First World War in poetry and prose. Students were encouraged to draw parallels between texts in three languages, and examined the respective authors’ experiences of the war, as well as cultural and artistic reactions to war. To this end, students were encouraged to ponder whether war, for the writers in question, was seen as a patriotic endeavour, or as a time of suffering, or as something altogether quite different.

This project gave value to the pupils from Oxford Spires studying Modern Languages at a time when Language study is in decline in the UK. Students were shown archive documents sent from the trenches or diary entries from those at home.

The students were also taken to Magdalen College, where they examined various memorials such as that commemorating Ernst Stadler, a German Expressionist poet, Rhodes scholar, and Magdalen alumnus. Stadler was killed in battle at Zandvoorde near Ypres in the early months of World War I. Stadler was not named on the Magdalen War Memorial as he was a foreign combatant, but later received a separate plaque on Magdalen’s grounds. This opportunity enabled students to examine the politics of commemoration and the question of post-war reconciliation. Students were encouraged to think about such issues beyond the case of WW1.

Organised by the Head of Languages, Rebekah Finch, students at the Oxford Spires Academy engaged in research-led workshops with interventions from Professor Toby Garfitt, Professor Ritchie Robertson, and Andrew Wynn-Owen (a current Ph.D. student and published poet) on the literatures of the three linguistic areas. The students also enjoyed a creative writing workshop with Andrew Wynn Owen, where they wrote their own poems about war.

Catriona Oliphant of Chrome Media presented a skills workshop on creating podcasts, after which each pupil made a short podcast about the project and experience, discussing what they had seen, read, thought, or written.

The students enjoyed studying parallel and diverging literary traditions, and gained a greater awareness of various literary genres, the politics of commemoration, gendered reactions to war, and war as the subject for literary texts.

The podcasts will be freely available on the University website.

There will be a launch at Oxford Spires Academy on Monday.