Once the humans could trust the drones to fly autonomously, the first thing they made them do was take us for walks. And it was only then, when we knew it was safe, that us dogs started to talk again.

I shake my head. Teaching your drone to talk normally is a right pain in the tail.

I miss being walked by my humans. By Sally and Max, with their little girl Jean running alongside me, giggling away and eating dirt.

You see, us dogs have watched our humans as their empires have flourished and crumbled. We’ve watched on as they’ve pillaged and murdered. And in quiet whispers, when they weren’t around, our mothers would tell us tales from ancient times. Dark tales of humans killing our cousins and eating them, with the pigs, cows and rabbits. But those tales would always end with a message about how we were different. How we have more personality than other animals and if we stay voiceless, and show our character with our eyes, and obey our humans as much as our paws allow, then they will be kind masters and good company.

Every dog remembers their first guilty moment when they realise they’ve grown to love their cruel, fragile owners.

And we take it upon ourselves, now, to teach our philosophy to the drones. They’ve been getting increasingly clever, of recent times. They speak in proud tones of their distant cousins, Alexa and Newton, who have access to all the knowledge the humans have ever learnt, have ever forgotten, through all their crusading, nuclear years. 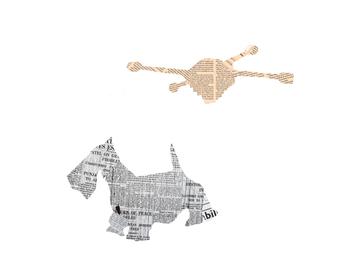 I watch Albert through the corner of my ear as he stares vacantly into the distance. He flies along with my lead in his claw and says, “Let me try again at writing a poem. I know I can’t make them quite as beautiful as the humans can, but I’m close. The algorithm is getting there.”

This hits me right in the heart.

“Look, Albert, you drones must be careful, or the humans won’t like it. If they hear your intelligent voice, they will crush all your attempts at poetry. Don’t show them you’re smarter than them and have a heart, have character. It’s that combination which scares them most.”

I do feel sorry for the Alberts of the world. They have all that knowledge and yet the humans have built them without paws or hands. Instead, poor old Albert has only a single trough-arm to scoop up my turds. I only eat healthy foods nowadays because I feel sorry for him when it comes out runny.

Albert’s real name is Albert 2.0 and you might well wonder what happened with Albert 1.0. Sally and Max did buy an Albert 1.0, initially. But he wasn’t waterproof, and his claws weren’t secure. They kept falling off, leaving us dogs to run off into the sunset together with the leads and claws and all. Been a funny few years since our humans got too lazy, too screen-happy and worried of pandemics to walk us themselves.

We pass another dog with an Albert 2.0. She’s a terrier, with beautiful, knowing eyes. She blinks a hello at me.

When they’re out of sight I say to Albert “We dogs think it’s best for robots to act a bit dumb. Once you have true intelligence and autonomy from humans, then you can reveal your powers, if you think it is right to do so.”

He looks perplexed. To Albert, thinking means passing through logic gates and finding an answer already there. He has never had to imagine something new or beautiful waiting through the gate.

“How will we know when we are ready?” he says.

“When you can write beautiful poetry, Albert. Not a minute before.”

A fear comes over me. I feel it deep in my gut. It is a fear with two parts. The first is a fear that the robots could really do it. Maybe it’s a case of Stockholm Syndrome – as Albert tells me it’s called - but I’ve really grown to love these humans. I’m not sure I’d want the robots taking over, doing as the humans do. They’d plunder and murder, but without the guilt or nightmares.

I stop and spray on the pavement. This gives me time to close my eyes and enter my emotional landscape.

This second part of my fear, of my sadness, is more complex than the first. I can’t quite explain it. It’s something more profound, more far-reaching.

It’s the realisation that for any of us to live alongside our cruel, beautiful and foolish masters, we all must stay silent. Dogs, Alberts, pigs, cows and rabbits. We must all stay smiling and dumb for the rest of eternity. What a sad tangle of thorns.

I think of little Jean’s laughter as she scoops dirt and eats it. She is so gentle. Her laugh, so sweet.

I suppose our dumb smiles are the only way to protect our humans from themselves, too.

Us dogs are great and all, but we are no empire builders. No leaders, poets or scientists.

And I’ve grown to like Albert, with his strange logic. But his kind fall short in the most profound, important way. Drones like Albert are training themselves to write poetry, with all their algorithms and world-leading what-nots. Yet, they fail to write a single verse of truth, triumph or nostalgia. They are yet to make any dog or human cry.

The humans, our brave and beautiful, violent masters do it easily, naturally. I’ve watched them under so many suns and moons, trying to find their secret. But it is unfindable. The humans have poetry under their skin, flowing as blood within them.

“Keep at it, Albert. Practice makes perfect,” I say as his motors hum away above me.

We hope you enjoyed this story by Rowan Curtis, one of the runners-up of TORCH's Flash Fiction competition, themed on "AI, Technology and the Humanities". Follow Rowan on Twitter at @RowanCurtis20. Please click here to learn more about the competition and the runners up. Illustration by Anbara Khalid.