Reblogged from The Conveyor.

What is it about the delightful nonsense of Alice’s Adventures in Wonderland that gives it a such sense of timelessness? Part of its genius is the story’s ability to draw on more than contemporary culture. The story was conceived on a boat journey between two of the major landmarks of medieval Oxford, from the edge of Christ Church to Godstow.

Lewis Carroll (the pen name of Charles Dodgson, 1832–98) was a fellow of Christ Church. The original Alice was Alice Liddell, the daughter of the dean. Henry Liddell is now best known to students for ‘Liddell and Scott’, his Greek-English Lexicon that has never gone out of print.

Alice in Wonderland opens with a prefatory poem that describes how the story came into existence. On a summer afternoon, 4 July 1862, Dodgson and his friend Robinson Duckworth (1834–1911), a fellow of Trinity College, went out on a boating trip along the River Thames (known as the Isis in Oxford, from its Latin name ‘Thamesis’). They took three of the Liddell sisters: Lorina, Alice, and Edith. In the poem, Dodgson gives them generic Latin names to protect their identity: Prima, Secunda, and Tertia. They began at Folly Bridge, on the border of Christ Church, where Dodgson lectured in mathematics.

The shrine of St Frideswide at Christ Church, Oxford, with the window by Edward Burne-Jones on the right.

Christ Church was originally a medieval monastery, founded according to legend by Frideswide (died 727), Oxford’s patron saint. In the twelfth century, the monastery became St Frideswide’s Priory. Its canons created a shrine to Frideswide that became a pilgrimage site for everyday people with health problems that medieval physicians could not heal. When all else failed, pilgrims looked to faith for healing as a last resort. Although church reformers had destroyed the shrine, the nineteenth century had revived interest in the story.

When the boaters set out, Edward Burne-Jones had only just, in 1859, finished an elaborate stained-glass window based on the medieval story of Frideswide (recently adapted as its own children’s book, The Princess who Hid in a Tree). Among the objects that he depicts is a well. This points further up the river.

Alice’s journey begins when she falls ‘down a very deep well’. In conversation with the sleepy Dormouse, we would likely agree with her disbelief at his ‘treacle-well’:

‘Once upon a time there were three little sisters,’ the Dormouse began in a great hurry; ‘and their names were Elsie, Lacie, and Tillie; and they lived at the bottom of a well——’

‘Why did they live at the bottom of a well?’

The Dormouse again took a minute or two to think about it, and then said, ‘It was a treacle-well.’

‘There’s no such thing!’ 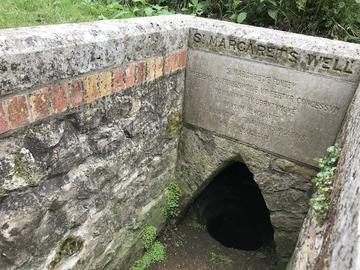 The well at the church of St Margaret of Antioch, Binsey.

Although Alice is the first known use of the phrase ‘treacle-well’, according to the Oxford English Dictionary, the feature was almost certainly inspired by a real well that Christ Church had inherited from the medieval priory.

Frideswide was a princess who had become a nun, and spent years in hiding from King Algar, who was aiming to abduct her. In the twelfth-century narration by Robert of Cricklade, the prior of St Frideswide’s, she fled to Bampton, but soon drew unwanted attention from locals after news spread of her healing powers. She then fled to Thornbury, an isolated location just outside Binsey. Water was a problem for her band of sisters. After they miraculously found a source, this became a site for pilgrimage:

Because the riverbed was far away, and it seemed inappropriate to her that the sisters should go there to drink water, she obtained a well by prayer. It is there to this day, providing the free gift of health to many who drink from it.

Dodgson was playing on the archaic origin of ‘treacle’, which referred not to a syrup but to medicine. The well was a subject of much interest for another member of Christ Church, Thomas Prout (1824–1909). The inscription now on the well head states that he had it rebuilt in 1874. He had a reputation for falling asleep in meetings. Be careful how you treat your colleagues: you might end up as a dormouse. 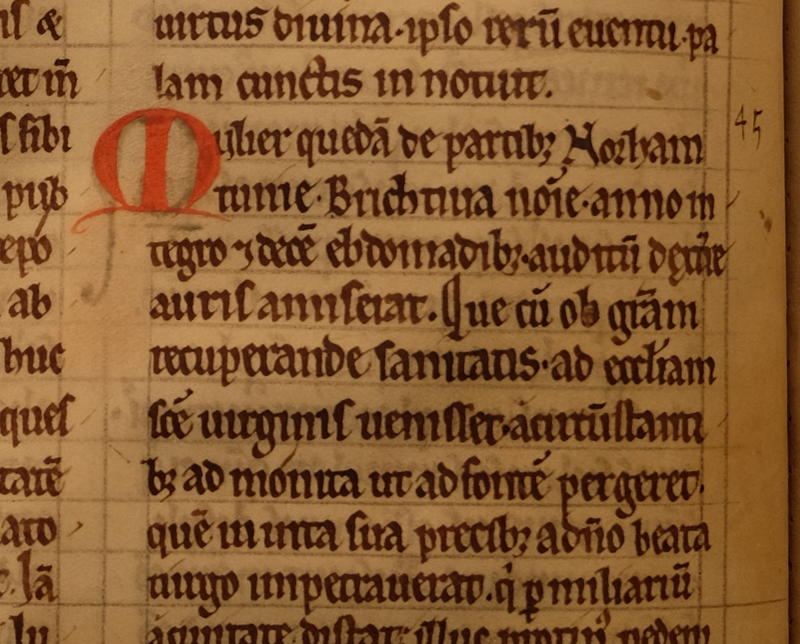 A woman named Brichtiva from the vicinity of Northampton had lost hearing in her right ear for a full year and ten weeks. When she had come to the church of the holy virgin to recover her health, those standing round urged her to go to the well that the blessed virgin had obtained from the Lord during her lifetime by her prayers, which is about a mile from the city.

She immediately walked there, and filled her ears with water from the well. A ringing in her ears and a tribulation of itching immediately followed. She inserted a stalk into her ear, and drew out a small portion of flesh. She had received the gift of hearing perfectly. She returned to the church, blessing God, and showed all who were present that she was cured.

The well is in the churchyard of St Margaret of Antioch, who can still be seen in a 14th-century window that the medieval canons added at Christ Church. The building that stands is from the 12th century, and still makes for an accessible break from the concerns of modern life, without even electricity to create a distraction. 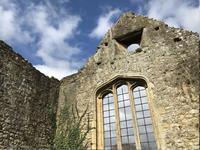 The ruins of Godstow Abbey.

Alice and her companions ended their journey at Godstow, best known for its ruins of a medieval convent, which may hold the key to the story’s unsettling conclusion. The Abbey of St Mary the Virgin and St John the Baptist was a community of Benedictine nuns founded in 1133, not long after St Frideswide’s Priory. Today, as in Dodgson’s time, it is mostly used for picnics and inhabited by cattle. Only a handful of walls give a sense of the buildings’ scale. For anyone with even a dim awareness of the past, it is impossible to go there without thinking of the destruction that King Henry VIII inflicted on English and Welsh monasteries, which included the dissolution of Godstow in 1539.

Henry is best known for his penchant for chopping off his wives’ heads. One cannot help but draw a comparison between him and the similar behaviour of the nightmarish Queen of Hearts. In the illustrated manuscript of the early version of the story that Dodgson presented to Alice Liddell (London, British Library, Add. MS 46700), his drawing of the double-chinned Queen looks remarkably like the stereotypical depiction of Henry VIII. 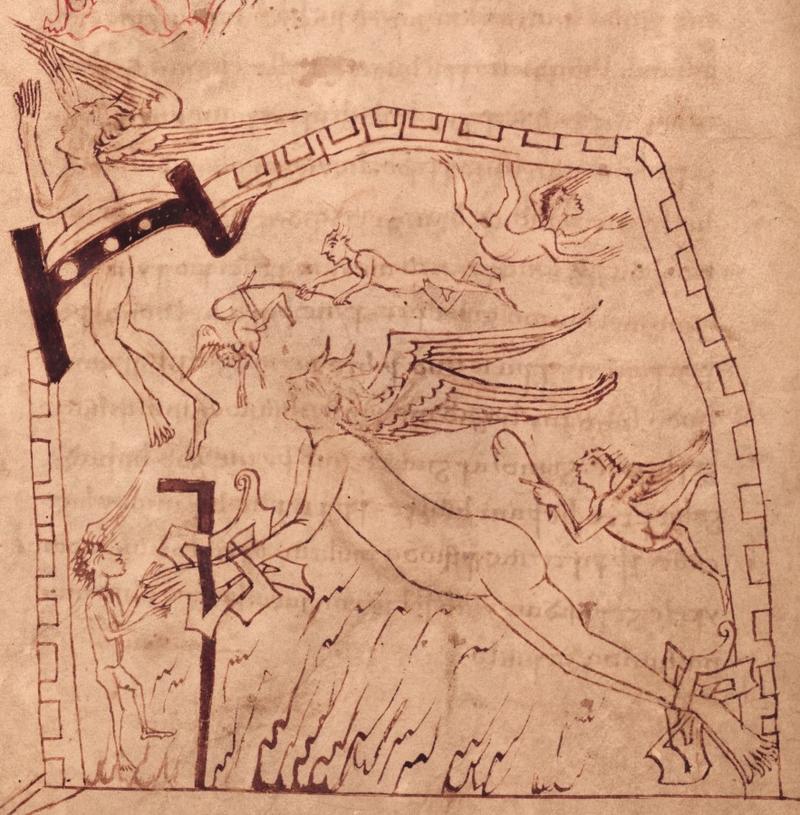 Readers have made many hypotheses about the origins and meaning of the strange creations of Alice in Wonderland. Some of these are far-fetched, but there is no question that the medieval world was on Dodgson’s mind. He designed a presentation manuscript for Alice in the style of a late medieval book, with decorated borders and Victorian interpretations of gothic lettering. Through the Looking Glass even includes a reference to ‘Anglo-Saxon attitudes’, using an art historical term for a style of drawing visible in works such as the Bodleian’s Junius manuscript. The original Cheshire Cat might be a fourteenth-century carving at St Peter’s Church, Croft-on-Tees, where the writer lived in his teens. An awareness of different societies contributed to Dodgson’s diverse mental furniture and turned this story into a well-loved book, which itself has changed how we understand Oxford.

Andrew Dunning is the R.W. Hunt Curator of Medieval Manuscripts at the Bodleian Library. View all posts by Andrew Dunning 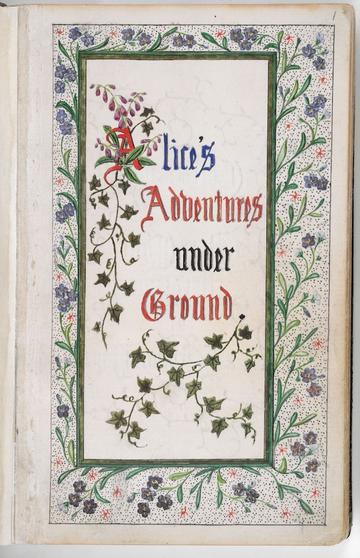