We are launching Post-War: Commemoration, Reconstruction, Reconciliation with the award-winning novelist and memoirist Aminatta Forna, OBE in conversation with Elleke Boehmer, Professor of World Literatures at the University of Oxford.  This event will take place at 5pm on Friday 20 October in the Andrew Wiles Building, Woodstock Road, and you can sign up for it (for free!) here.

Memory is the stuff of Forna’s work—her memoir, The Devil That Danced on the Water (2002) and her novels Ancestor Stones (2006), The Memory of Love (2010) and The Hired Man (2013) all record precious and painful pasts and reflect on the processes of the recording.

The Devil That Danced on the Water is a poignant and often funny account of Forna’s childhood in Sierra Leone and Britain—she was born near Glasgow to a Scottish mother and a father who was a medical student from Sierra Leone.  Aberdeen is a long way from Africa, and never more so when the child Aminatta tells her Scottish grandmother that she shouldn’t buy dead chickens. ‘“Whatever makes you say that, dearie?” She looked down at me in surprise. “You don’t think I’m going to kill it myself, do you?”’  Childhood memories are dispersed across a darker backdrop: the military coups and violence racking Sierra Leone.  The Devil That Danced on the Water investigates and places on record the corruption and trumped-up charges that led to the execution by hanging of Forna’s father, Dr. Mohamed Sorie Forna, in 1975. ‘What use against the deceit of a state are the memories of a child?’ asks Forna, proving that, combined with investigative journalism, they are a powerful weapon indeed.

After The Devil That Danced on the Water, Forna moved into fiction.  Ancestor Stones juxtaposes stories told by four Sierra Leone women—Hawa, Mariama, Serah and Asana—stories about loss and love, visions and abuse, domesticity and escape.  The stones of the title are those handed down from mother to daughter, objects of remembrance and invocation, capable of summoning up helpful spirits when held in a human hand.  Stones—chalky, smooth, glinting, opaque—merge with stories, less tangible but also capable of being scattered, each a form of commemoration, a remembering with others.

The Memory of Love is a palimpsest of remembrances, distant and recent.  A British psychoanalyst, Adrian Lockheart, has volunteered to work with victims of the Sierra Leone Civil War.  His occasional flat-mate, Kai Mansaray, is a surgeon with his own repressed traumatic memories.  Forna’s image for these memories is phantom limb syndrome: ‘the pain is real, yes, but it is a memory of pain’.  So, too, with love: ‘a power that endures’ when the object of love is lost.  Dealing in phantoms, fugues and trickery, the novel conveys the elusive nature of the past.

The Hired Man, Forna’s most recent novel, changes the setting from Sierra Leone to Croatia.  An English family have bought a house near a small town, Gost, intending to renovate it and sell it on.  The renovation, carried out by Duro, the ‘hired man’, demonstrates the inseparability of reconstruction (a form of renovation), commemoration and reconciliation.  Uncovering the past—in this case in the form of repairing a gorgeous mosaic of a phoenix-like bird—is a painful, even violent process.  A lost woman—dead or alive is not clear—haunts the novel, which, by refusing to be certain about her fate, keeps the route from past to present and future open.

‘If her second novel The Memory of Love, set in Africa, confirmed Forna’s flair for writing about war and its aftermath, The Hired Man seals her reputation as arguably the best writer of fiction in this field’—Jackie Annesley’s assessment in The London Evening Standard shows why we are so lucky to have Aminatta Forna to open our Series.  We look forward to welcoming you, if you can make it, on 20 October. 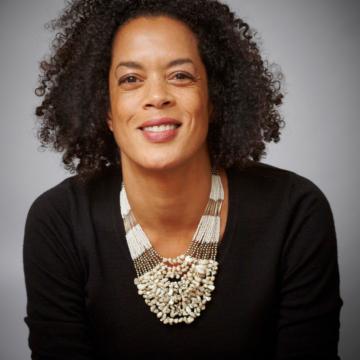