Art, Science, and The Thirsty World 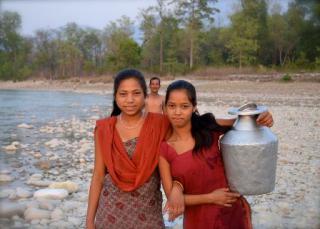 Art, Science & the Thirsty World is now part of AQUAE Venezia 2015 as a video installation for the exhibition ‘Visualising Water Worlds’ sponsored by EXPO Venice and EXPO Milano. The installation at the Arsenale di Venezia will run until 31 October 2015.

Art, Science & the Thirsty World was an interdisciplinary conference project between the University of Oxford and Cornell University organized by Oxford graduate students Cayenna Ponchione (Music), Jessica Thorn (Biodiversity) and Benedict Morrison (Film) in collaboration with Cornell Professor Gail Holst-Warhaft (Comparative Literature and Biological and Environmental Engineering, Director of the Cornell Institute for European Studies Mediterranean Initiative). The development of this project was instigated by the TORCH interdisciplinary conference competition in 2013. The conference cast together academics in the arts and the sciences to pursue a critical exploration of interdisciplinary practice through collaborative presentations and performances. It facilitated dialogue between researchers and practitioners in the arts, sciences and engineering and sought to foster creative, innovative and trans-disciplinary discussions about water scarcity solutions.

Video footage was captured by Mark Lawrence (Cornell University) and the SAE Institute (at the Tandem Festival, Oxford), and still images were provided by Jessica Thorn and Cayenna Ponchione.

Art, Science & the Thirsty World is sponsored by The Oxford Centre for Research in the Humanities, Merton College, the Atkinson Center for a Sustainable Future (Cornell University), Cornell Institute for European Studies, and the Brettschneider Fund.