The Sun for 28 March 2019 reported that the third most popular name for a boy baby in the year so far was Atticus.  The Sun doesn’t quote its source, and a quick Google of ‘most popular names’ gives wildly varying lists, but clearly the name Atticus has escaped from the obscurity that had shrouded it, I had thought, for upward of two millennia.  (But I had forgotten a famous exception: see below.)  Pope attacked Joseph Addison as Atticus in Epistle to Doctor Arbuthnot, but the point of that was precisely that the name was not in use: it was a metrically equivalent cover name plucked from antiquity, evoking most obviously Cicero’s long-suffering confidant the businessman Titus Pomponius Atticus, recipient of the 16 volumes of the Epistulae ad Atticum.

The Greek original of Atticus, Ἀττικός, is an ordinary geographical adjective meaning ‘of Attica’, Attica being that region of Greece of which Athens is the centre.  The first known bearer of it as a name is a Roman, Manlius Torquatus Atticus, consul in 244 BC; then came Cicero’s friend, and thereafter it was quite popular as a cognomen, third name, among Romans.  Romans had a cultural inferiority complex vis-a-vis Greece: Virgil makes Aeneas’ father Anchises, founder of the Roman race, proclaim that Greece might have distinction in the arts,

To rule Mankind, and make the World obey.

For a Roman to take the name Atticus was apparently to reject this self-classification as ‘philistine, but powerful’ and lay claim instead to be as cultured as an Athenian, to be tinged with sal Atticus, Attic salt or wit.  Remarkably, the Roman name then became a Greek name.  The Lexicon of Greek Personal Names lists 303 bearers of the name in its Greek form, almost all of whom date from the Christian era (are the tiny number of exceptions misdated?): Herodes Atticus, the richest Athenian of the second c. AD, is a good example.   So Romans were ‘Attic’ before Greeks were!  By the time Greek Atticuses emerged, Greece was, alas, under Roman rule, and it has been argued that Greeks were seeking to conform to a Roman ideal of the ‘good Greek’, the embodiment of Attic culture: whence the borrowing back of the name.

But that was long ago... The modern re-emergence of the name is undoubtedly due to the modern Atticus I had forgotten, Atticus Finch, liberal hero of To Kill a Mocking Bird, a book with more than forty million worldwide sales.  Why Harper Lee gave her hero that name is another question, to answer which one would have to broach the whole issue of classical naming (of people and places) in the USA; the Finches’ cook also had a Roman name, Calpurnia.  When Go Set A Watchman appeared, written by Harper Lee before To Kill a Mocking Bird but only published in 2015, many readers were horrified to learn that the Atticus Finch of that book had much less progressive views on race than the same man in To Kill a Mocking Bird.  But that discovery does not seem to have dented the new popularity of the name.  Names escape their origins, and acquire a life of their own. 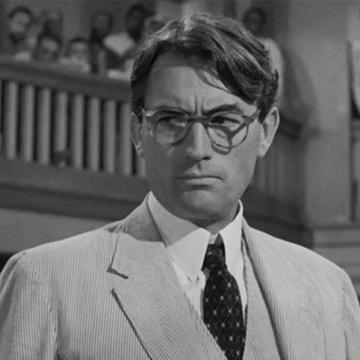