In the Post-War ‘Conflict and Community’ workshop that took place on Remembrance Day this year, attendees discussed the ways in which public commemoration can sometimes become politically fraught. As Shaista Aziz puts it in her recent post on this blog, ‘Acts of commemoration and reconstruction are deeply political and often polarising. The act of remembrance is also never neutral’.

We need look no further than the yearly arguments over poppies (and, in particular, the 2014 poppy installation at the Tower of London), to see that decisions made about the form and purpose of public commemoration can, of course, often be contentious. The question of who the commemoration is for – and, in turn, who is being forgotten by an act of collective remembrance – is an important one, and must always be part of the decision-making that shapes any public memorial.

Who is a pubic memorial for? Paul Cummins and Tom Piper’s Blood Swept Lands and Seas of Red,

In Worlds of Hurt: Reading the Literatures of Trauma, Kalí Tal argues that ‘bearing witness is an aggressive act’. This may initially seem at odds with the reflective mood of Remembrance Day, during which the nation remembers its war dead. However, she explains that witnessing is ‘aggressive’ because it is ‘born out of a refusal to bow to outside pressure to revise or to repress experience ... . Its goal is change’. Bearing witness, for Tal, is about speaking truth to power.

We can see a clear example of this in the recent #metoo campaign on social media, in which women around the world forcefully bore witness to a culture of sexual harassment that had previously gone ignored.

But we can also see it in literature about war, from the now-canonised poetry of Wilfred Owen to emerging writing about the West’s present-day entanglements in the Middle East. Solmaz Sharif’s recent poetry collection, Look, for instance, commemorates the unknown victims of US airstrikes in Iraq since the invasion of 2003: ‘[Lay] down / to sleep then,’ she writes, ‘in the Tigris / under water boiled by smart bombs’.

None of this is to say that commemoration of one conflict or community must necessarily come at the expense of another. Rather, the point I’d like to make, which was affirmed by the excellent talks and discussion at the workshop, is that it’s crucial for those in decision-making positions to be mindful about the ways in which the form taken by an act of public commemoration – be it a monument, a service, or a temporary installation – can have a powerful impact on how inclusive a society is perceived to be by those at its margins.

As memory theorist Michael Rothberg has argued, it is often the nature of memory, unlike a permanent stone monument, to be ‘multidirectional’, or ‘subject to ongoing negotiation, cross-referencing, and borrowing’. Memory is messy and unruly, but it’s precisely for this reason that it has the potential to be ‘productive and not privative’. Public memorialisation, on the other hand, can sometimes be an unhelpfully competitive process.

Nonetheless, by opening itself to the testimony of others, commemorative work, when done thoughtfully and with innovation, can build bridges between seemingly disparate or disconnected experiences of loss. It is in these instances that, to borrow the words of philosopher Judith Butler, ‘our willingness to become undone in relation to others constitutes our chance of becoming human’. 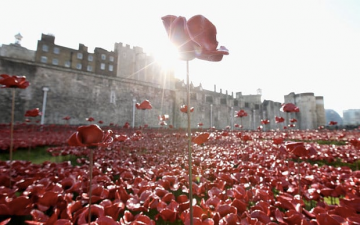