Being a Woman Byzantinist

Taking place at Ertegun House with the support of the Oxford University Byzantine Society, the event 'Being a Woman Byzantinist' was the brainchild of current DPhil student Anya Rai-Sharma. Rai-Sharma introduced the event with personal reflections on how female role models, real and fictional, had helped her navigate the sexism she encountered growing up and how she aimed to celebrate the female academic role models she had found in Late Antique and Byzantine Studies by inviting celebrated female academics from all areas of the field to discuss their careers and research.

Averil Cameron noted in her speech that there were two distinct conversations to be had, that of being a woman and that of being a Byzantinist, and no speaker chose to focus exclusively on her gender, preferring to talk about her career and research. Useful advice to graduate students of any gender, from how to break through the thesis-writing wall to how to cope with dubious Black Sea ferries was woven into each talk, alongside each woman's passion for her research and pride in her achievements.

A prominent piece of advice that ran through all six speeches was the importance of finding friendship and exchange within a mutually supportive academic community; a subject of particular relevance in a field such as Byzantine Studies, composed as it is of numerous, wide-ranging sub-disciplines. Each woman spoke about the positive impact made on her life by teachers, undergraduate and graduate tutors (particularly female tutors); and, particularly, academic peers. In an academic world where young graduate students are acutely aware of the pressure to secure limited jobs and even more limited funding, this exhortation to recognise the talent of your peers and to use them to advise and shape your own research was important and refreshing. As a woman, it was also uplifting to see such an admiration by the speakers for their female peers. Young women are so frequently socialised to begrudge other women’s success that the resoundingly positive attitude towards fellow female academics was something that I hope many who attended the talk will have noted.

However, in spite of the efforts made to keep the focus on careers rather than gender, the sexist attitudes that all the speakers had encountered were a consistent refrain. With the exception of Catherine Holmes, all had begun their academic careers prior to the integration of Oxbridge colleges and Ivy League universities, and numerous references were made to being the only or one of the only women in the faculty at the beginning of their careers. Cameron’s distaste at being told by a senior academic at KCL that women shouldn’t take academic jobs as it kept their husbands out of the sector was obvious, as was Herrin's disbelief at being told she was forbidden from taking up graduate study at Harvard due to her gender. One was acutely aware how visible and exposed the speakers must have seemed in the overwhelmingly male academia of their early careers, as a photograph of Cameron at the 1970 Dumbarton Oaks Byzantine Studies Symposium starkly illustrates.

This feeling of exposure seemed far more distant to current female graduate students; as did Holmes’ recollection that there was an undercurrent of unease towards female undergraduates at her Cambridge college, which had gone mixed only a few years before her matriculation. However, points the speakers made about sexism in their early careers still, to the shame of British universities, resonated today. Cameron’s statement that when she became head of house at Keble in 1994 there was only one female fellow on Governing Body is hardly an example of a past problem – no Oxford college has gender parity among its tutorial fellows, and many colleges only have one or two women fellows at all. Similarly, Herrin’s point that her career was made enormously easier by the sympathetic and liberal attitude of Princeton University towards her young family and the demands placed upon her by childcare will have struck a chord with anyone familiar with evidence that female academics take significantly less maternity leave than counterparts in other sectors (http://www.theguardian.com/education/2014/nov/18/academia-for-women-shor...) and that female academics face such pressure to publish in the competition for a permanent job that maternity leave is spent working (https://lizgloyn.wordpress.com/2015/09/21/on-being-an-ecr-academia-and-m...).

This aside, I was struck by how casually the effects of other sexist practices were brushed aside by the speakers. Each one mentioned how she had spent much or all of her education in all-female institutions, with four of the six educated at all-female Oxbridge colleges. The positive aspects of single-sex education are not to be rejected outright, and the impact of inspiring female teachers and tutors has been discussed, but I felt it odd to present this aspect of education as a freely made choice when, in fact, women were forced into all-female colleges by the refusal of male colleges to admit them. The impact this would have had on female academics working before the integration of colleges, forbidden from applying for fellowships at the more prestigious men’s colleges, was only briefly touched upon by Cameron.

Perhaps, however, my unease at this represents how far the current generation of graduate Byzantinists has come and how differently my peers and I have encountered sexism in academia. Female students are now admitted to Oxford to mixed-sex colleges at equal rates with men, and achievement gender gaps at undergraduate level are narrowing. Furthermore, state-educated undergraduates are now in the majority and this number is increasing, and impressive access initiatives are prevalent across Oxford University to encourage applications from those from non-traditional backgrounds. When listening to Roueché talk about women Byzantinists of the 19th and 20th century, I was struck by her comment that these women's promotion of Byzantine Studies through popular culture, such as novels, will have reached many more people than the male scholars of the age, and I hope such figures will inspire graduate Byzantinists to engage with outreach events like the East Oxford Community Classics Centre.

The final word must be given to Jeffreys' statement that her mother, who had been denied the chance of a university education by the social diktat that it was not 'proper' for women, had insisted that her daughter study to undo the wrongs of the previous generation. The next generation of women Byzantinists could do worse than remember that mantra.

Image 1: The Theotokos with Christ, Chora Church, Istanbul
Image 2: Solidus of the Empress Irene (797-802), with her bust struck on both the obverse and reverse of the coin.
Image 3: The 1970 Dumbarton Oaks Byzantine Studies Symposium
Image 4: Maria of Alania marries Nikephoros III Botaniates, who she will eventually try to have overthrown. 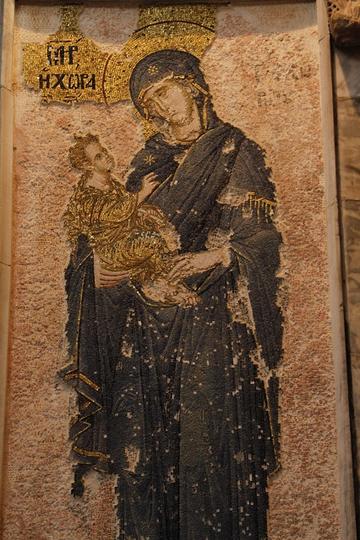