Bermuda history books to be housed at the University of Oxford

Bermuda history books to be housed at the University of Oxford

The event also celebrated the acquisition by Pembroke College of a collection of books on the history of this UK Overseas Territory. The idea for this event was borne out of a lecture held by CRAE (Oxford’s Campaign for Racial Awareness and Equality) entitled “Why is my Curriculum so White?”

Bermuda is a small island in the North Atlantic with a population of 70, 000 people. The island’s four-centuries long history is described by historian Walton Brown Jr as being shaped by a number of key influences “including Bermuda’s establishment as a settler colony, unlike the plantation colonies of certain Caribbean societies; the legacy of slavery, racial segregation and paternalism by the dominant elites; and the failure of the formal political process as an effective vehicle for political reform."

The 170-person venue was packed out by a broad cross-section of Bermuda society; black and white, young and old, Bermudian and non-Bermudian, as well as the Governor of Bermuda His Excellency The Honourable George Fergusson who is the Queen’s official representative on the island.

Treasure Tannock, a 16-year old drama student, began the evening with a powerful reading from “The History of Mary Prince”. Mary Prince was born a slave in Bermuda around 1788 and sold away from her family at the age of ten to the West Indies. Later in life, while living in London, her autobiography provided a first-hand description of the brutalities of slavery that had a galvanising effect on the anti-slavery movement.

The panel of six Bermudian authors continued this tradition of documenting the history of slavery and later segregation.  Reading excerpts from their books, the authors charted the island’s history from its founding in 1609 through to the race riots of the 1970s.  During the Q & A, which was expertly chaired by Evelyn James Barnett, members of the audience repeatedly echoed concerns on this history for contemporary Bermuda.

One of the overriding messages emanating from the audience was the need for Bermuda history to play a greater role in the Bermuda school curriculum so as to promote understanding and undermine asymmetries in information for future generations.  This event can perhaps be seen as a contribution in this direction.  Additionally, this event serves as a springboard for further activities within Oxford focused on issues of race and resistance in Bermuda and the Caribbean.

Link to video of the event:

Dale Butler spoke of how the books “highlight the boiling racial pot of segregation and tremendous bravery of each leader and group that fought to develop a society for all that was only to be met with outright hostility and hate; a legacy that has yet to be fully recognised or appreciated."

Dr. Eva Hodgson is “delighted and encouraged by Oxford’s interest in the history of Bermuda as she has unfortunately found that many white people in Bermuda prefer to ignore the issues around race and racism.”

Jonathan Smith emphasised how all of the books are “relevant to Bermudian society today - particularly in relation to the vexed race and economic equity issues.”

Ottiwell Simmons was pleased that “Bermuda’s history is being talked about in Bermuda”.

The family of the late David Critchley are pleased that his book is included in the Bermuda collection at Oxford and are proud of his passionate commitment to social justice and his involvement in the desegregation movement in Bermuda.

Alexa Virdi is a DPhil candidate in the Faculty of Law, University of Oxford. 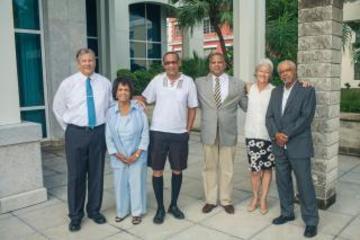