The paper I presented in the Modern Greek Studies in the 21st Century Network is part of my PhD research, which examines the social history of the Greek inhabitants in Egypt after their departure in the early 1960s. Viewing the Greek presence from a transnational and diasporic lens, my work contributes to the broader discussion of Modern Greek studies. Not only does it explore the social world of the Greek diaspora, but it also expands it further and adds to its diversification in academic study. 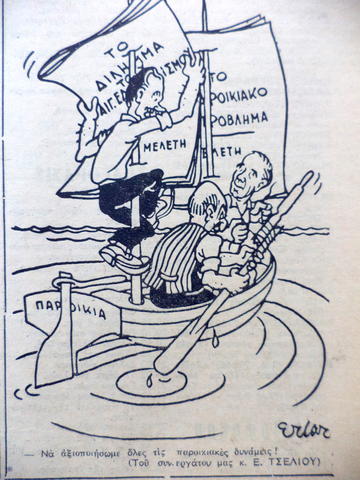 ‘Let's take advantage of all community's strength!’, a cartoon from the Greek-Egyptian newspaper O Paroikos tis Kyriakis on 28 May 1961. Archives of the Library of the Greek Parliament.

In October 1960, Kazoulis and Chryssovergis, the President and the General Secretary of the Greek Chamber of Commerce in Alexandria (GCCA), respectively, addressed the concerns around foreigners’ employment[1] to the representative of the Greek Chamber of Commerce (GCC) in Athens, Mamopoulos, as introduced in the new decree 263/1960 that was supposed to be enacted in November of that year.[2] The document described the “panic” (written in capital letters) that had overwhelmed Greeks who, regardless of class and occupation, would be led into calamity. This was an added reference given that there were no other foreigners left in the country but Greeks, which stressed how the new decree primarily affected the approximate 60,000 Greeks living in Egypt.[3]

The early 1960s “crisis” among the Greek denizens was not a new phenomenon. Studies have shown how certain social, economic and political transformations that have taken place in Egypt since the 1930s have had a great impact on the country’s Greek and other foreign communities, such as the Italians (On the Greeks, see for example: Kitroeff 1989; Kazamias 2009; Dalachanis 2017; On the Italians, see: Gorman 2015; Viscomi 2019). The formation of the Egyptian nation-state and the new socioeconomic policies marked a new reality, with the colonial era that represented the exploitation of the country belonging to the past. As Sinem Adar highlights, the modes of inclusion and exclusion in nation-building should be understood in relation to the transition that arose in society “from imperial subject-hood to national citizenship” (Adar 2016, 138).

The massive departure in the early 1960s characterized a period of transition and demarcated one more space of “rupture” in the context of departures as well as a long crisis that the Greek community experienced since the 1930s. Even though the number of Greeks post-1960s dropped dramatically, and although this was a precarious period, a considerable number of people remained,[4] most of whom acquired Egyptian citizenship only in the 1980s.

Considering that the panic and crisis were depicted as the norm in the archival documents, and reflecting on the fact that most of the historiography focuses on the Greek departure from Egypt, certain questions emerge concerning what made Greeks stay on an individual level and what “adjustment” policies were taken on an institutional level for those who remained. My research thus explores the lives and multiple histories of Egypt’s Greek inhabitants, after the departure en masse in 1961-1962. Specifically, it studies their social and economic presence during a period of economic and social reform under Gamal Abdel Nasser until the introduction of the Anwar Sadat-initiated infitah policies in 1976.

Looking beyond the Greek departure, its narratives and subsequent consequences on the nation, I shed light on the institutional and personal lives of those who remained and analyze some of the factors that shaped their decisions. During this period of crisis and insecurity for those who decided to remain in Egypt, which possibilities did they explore, and what type of alternatives and new environments did they create? In addition, why did they move away from solutions of “repatriation” or migration to a third country?

By discussing several oral accounts and archival documents, this research attempts to challenge the notions of an immobile or stable community. Thus, it seeks to examine different types of mobility, spatial or socioeconomic, that Greeks experienced in Egypt. By doing so, this research not only attempts to demonstrate the active Greek presence in Egypt post-1960s, despite its demographic decline, but it also acknowledges the different layers of this presence across Egypt, as being an integral part of the Egyptian society.

Eftychia Mylona is a PhD researcher in Middle Eastern Studies at Leiden University and her research focuses on the Greek community in Egypt from 1962 to 1976. Since August 2014, she has been working as a lecturer at the BA International Studies of Leiden University, where she teaches courses on the Middle East.

[4] The number of Greeks was estimated to be about 17,000 in 1967. Greek National Center of Social Research on the issue of the Greeks Abroad, Apodimoi Ellines-Greeks Abroad, (Athina: Ethnikon Kentron Koinonikon Ereunon, 1972), 70. 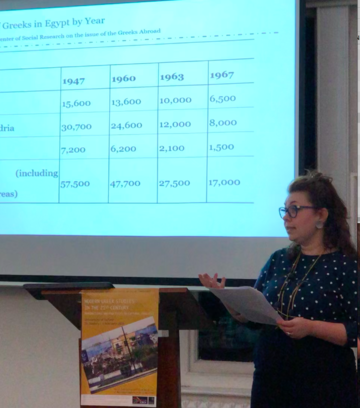