Beyond the Bildungsroman?: Elleke Boehmer and Irenosen Okojie

Beyond the Bildungsroman?: Elleke Boehmer and Irenosen Okojie

On Monday, May 16, the Fiction and Human Rights network hosted a panel discussion entitled 'Beyond the Bildungsroman? Creating Free Agents Today' with novelists Elleke Boehmer and Irenosen Okojie. The discussion focused on the connection between narrative form and the self, responding to Joseph Slaughter and Steven Clingman’s work on the connection between the Bildungsroman and contemporary human rights.

Boehmer spoke about “the importance of narrative to the construction of the self” in her 2015 novel, The Shouting in the Dark. Boehmer began with a short reading from the novel, in which the protagonist, Ella, reads novels while sunbathing, trying to fill up her empty time, yearning for something exciting to happen. The novel explores Ella’s “quest to find a story through which her identity might be articulated,” examining the connection between stories and the development of an identity. Boehmer referred to her novel as a “murderous Bildungsroman”: a story in which Ella’s search for an identity can only occur at the expense of her father’s sense of self and a process in which Ella’s incorporation is impossible without the breakdown of the family. When asked about the Bildungsroman form at the end of the panel, Boehmer described the restrictions of the form and how she adapted it, focusing on the way the singular narrative arc creates a constant need for progress that leaves little “scope for mistakes, for roads not taken, for trying again, [and] for periods of hiatus where nothing much happens.”

Okojie’s Butterfly Fish (2015) strays further from the Bildungsroman form, weaving together stories spanning continents and centuries—from contemporary London to the Kingdom of Benin to 1950s Nigeria. The novel tells the story of a woman, Joy, whose life is falling apart, exploring the process of moving on after trauma. In Okojie’s words, Butterfly Fish asks the question, “how do you find your way back from the dark?” Following a reading from the novel, Okojie described how she used a variety of narrative forms—alternating between first-person, third-person, and diary sections—to tell a story that is more about a “coming-to-terms” than a “coming-of-age.” She found the third person allowed her to tell the story of the Benin community “as fully as possible,” while first-person narration worked best to tell Joy’s personal story of life in  contemporary London.

To conclude the event, both authors fielded questions from the audience, touching on the experience of bridging generic boundaries, the concept of progress in the Bildungsroman and the “social work” of the novel.

Rachel Wilson is a Visiting Student from Macalester College in the USA. 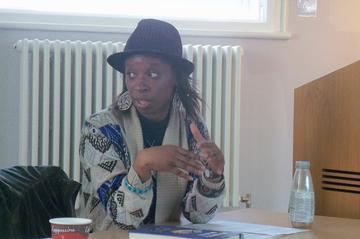