Disciplinary isolation remains one of the most disturbing problems of the field of early China studies. While such regions as the Mediterranean and the Near East are indispensable in any discussions of the ancient world, ancient China is still often seen as a mysterious country of obscure philosophers who produced inspiring maxims of oriental wisdom. This impression of China as the country of Confucius and the Art of War is difficult to align with Mesopotamia with its impressive military organisation, pervasive state control, and minute account-keeping, or with Egypt with its orderly system of state management and agricultural production.

A reconsideration of ancient China as a society that is, despite its uniqueness and cultural distinctiveness, a valid instance of an ancient human society, subject to the rules and patterns that apply to any other society in antiquity, is long overdue. This is why the comparative monograph on the interaction of writing and state in ancient China by Wang Haicheng, a researcher of ancient Chinese Art History at the University of Washington whose scholarly interests extend very far beyond China, should be praised as one of the first systematic attempts to bridge the studies of ancient China with other parts of the ancient world.

The monograph is uniformly structured and divided into three parts: “Writing and the legitimation of the state: history as king list”, “Writing and the wealth of the state: people and land, census and land register” and “Writing and the perpetuation of the state: scribal education, lexical lists, and literature”. Each part in turn consists of two chapters, one covering Mesopotamia, Egypt and the Americas, and another focusing on China. The authorial intention thus appears clear: the missing elements in our understanding of ancient China are to be reconstructed by conducting a comprehensive analysis of typologically similar developments in early states of other regions. Wang endeavours to remove the veil of obscurity from ancient China, promising in the Introduction that “[t]ext types and practices that have never seemed anything but Chinese will turn out to be local forms of widespread phenomena – not peculiarities of early China but characteristics of early state societies.” (p. 10)

Wang Haicheng's work is truly interdisciplinary, and although China is his primary focus, his discussion of other regions is more than just a survey of literature in the corresponding fields. The chapters on the Near East and the Americas often contain original observations and conclusions, and the secondary research that Wang integrates into his work is processed creatively.

The argument of the first part is based on a relatively complex set of premises that Wang accepts as a given: the early state experiences a constant need to legitimise its rule, history serves as a means of legitimisation, and the king list is the most basic form of legitimising history. Once these premises are accepted as universal, the following discussion unwinds naturally, demonstrating how the king lists functioned in Mesopotamia, how the early records from Egypt may be interpreted as having similar functions to the Mesopotamian king lists, and how various textual and visual practices of commemoration of the rulers' descent in the Americas might have been employed for similar purposes. For example, Wang regards the Inka practice of preserving the embalmed mummies of royal ancestors as a typological counterpart of Egyptian lists of royal predecessors. All these diverse textual and non-textual practices are termed by Wang as “king lists”; thus, the term is extended far beyond its conventional use in the Mesopotamian context. The same approach is applied by Wang to China, and the firm conviction in the indispensability of some kind of king list for the perpetuation of a complex society leads him to discuss the hypothetical king lists in Erlitou and Erligang archaeological cultures for which we have zero textual evidence. The lack of explicit king lists in excavated records or in transmitted texts is not seen by Wang as a reason to doubt the existence of such texts starting from the Shang dynasty (13th – 11th centuries BC). The fact that modern scholars were able to reconstruct the genealogy of Shang kings reaffirms Wang in the belief that the Shang diviners “certainly had written royal genealogies at hand to consult”, and the presence of similar genealogical information in the Shi ji (Grand scribe's records), a monumental historiographical work composed in the first century BC, allows him to speak about the “Shi ji's king list”. Thus, accepting a set of assumptions concerning the use of writing for state legitimation mainly informed by the ancient Near East allows Wang to reconstruct similar textual practices in ancient China even when the evidence is scarce or entirely absent.

The second part focusing on the use of early writing in state administration is the most elaborate and arguably the most important in Wang's monograph. The amount of comparative evidence assessed in this chapter is overwhelming and diverse, which makes Wang digress occasionally from his preferred pattern of consecutive treatment of important issues by region. He discusses in much detail the systems of land management, labour registers and account-keeping in Mesopotamia and Egypt, creating an impressive picture of a pervasive machine of state administration. In his discussion of similar practices in the Americas, he provides examples of some alternative ways of administrative account-keeping. Wang offers an insightful description of the peculiar accounting practice of the Inka based on khipu, which only allowed for relatively simple and restricted accounting and therefore led the Inka to make “reality conform to the capabilities of their record keeping”. One of the ways to adjust reality was mass deportation of subordinate population in order to make their settlement pattern compliant with the adopted accounting system.

When discussing the use of writing in state administration in China, Wang admits that there is no relevant textual evidence before the fifth century BC. Nevertheless, he does not consider it impossible to start his reconstruction of bureaucratic practices from Erlitou and Erligang, the pre-historic archaeological cultures of Northern China's Bronze Age. Subsequently, using the fragmentary epigraphic evidence, he reconstructs an impressive system of bureaucratic control that, he believes, was current in Shang and Western Zhou China. Due to the lack of evidence, Wang does not discuss the Spring and Autumn period (eighth – fifth centuries BC), but his argument concerning the Warring States (fifth – third centuries BC) and Han (206 BC – 220 AD) administrative practice is more firmly rooted in the relevant textual records. Overall, Wang argues that writing in China emerged in administrative context and that its proximity and relatedness with ritual and religion is exaggerated in contemporary scholarship.

In the final part of his discussion in the book, Wang investigates different elements of scribal education, particularly focusing on lexical lists which he regards as the core element of scribal education in any early literary culture. Like in the previous chapters, he uses the evidence from Mesopotamia and Egypt to create a universal model of a scribal culture extensively relying on lexical lists, and then applies this model to China. In doing so, he supplements the limited evidence from Shang with the evidence from Han and even from medieval China to create a synthetic image of an institutionalised system of literacy training that would apply to all these periods. For Wang, schools are an obvious and universal cultural phenomenon that exists “wherever literacy exists”. Likewise, drawing from his comparative survey, he suggests that lexical lists are also universal and must have been taught already at Anyang even though we do not possess any corroborating archaeological evidence. Wang also comes up with an unconventional suggestion concerning the poetic corpus of the Odes that, he believes, could have been used in scribal schools to teach the more complex linguistic patterns so that the students would not experience any difficulties while drafting simple administrative documents after the completion of training. Although the idea of the Odes as a component of scribal education is worth considering, its representation as the key element of curriculum is somewhat far-fetched.

Speaking about Wang's monograph in general, it appears that the Mesopotamian case is for him not merely a source of inspiration but rather a universal framework that can be applied to any other ancient culture. The alternative ways of the use of writing and organisation of state activities, such as the system of record-keeping based on khipu practiced by the Inka, are partially surveyed in his comparative chapters but never considered seriously in his reconstruction of ancient Chinese realities. Thus, the ancient China that he portrays seems to be almost predestined to appear, in many ways, a copy of Mesopotamia. This raises questions regarding the validity of large-scale comparative extrapolations. How universal is the Mesopotamian case? What aspects of ancient Mesopotamian writing can we borrow in our reconstructions of the early writing in China, and what should we consider as China’s unique features? It does not seem to me that these important questions are sufficiently problematized in Wang’s work.

It will not be difficult to accept Wang's reconstruction for those who agree with his core assumptions, such as the indispensability of king lists, the interdependency of writing and bureaucracy, the necessity of lexical lists and scribal schools for the perpetuation of writing. However, once these premises are not taken for granted, the argumentative line chosen by Wang ceases to be the only possible one and various alternatives emerge. So far these alternatives have not been systematically investigated, but Wang's monograph is a worthwhile start, offering a comprehensive and well-informed exploration within a concrete methodological paradigm. Hopefully, further studies will expand this field of inquiry, leading us to fully appreciate early China as one of the core centres of the formation of human civilisation.

The OCCT Review is a journal reviewing new books and trends in comparative and translation studies. 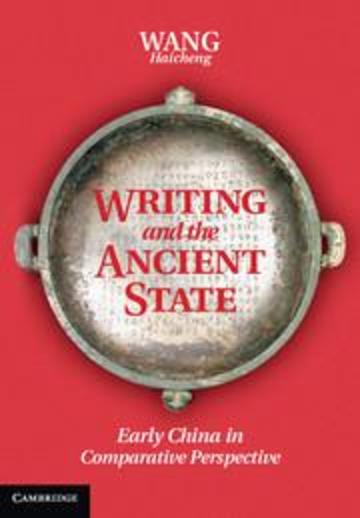