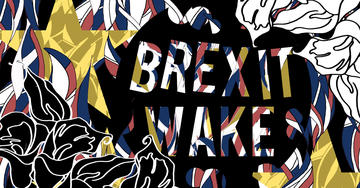 Brexit »And Now What?« - Brexit Wake

Event on 29 March 19:30 at the Literaturhaus in Berlin, Germany

Whether or not Britain will officially leave the European Union on 29 March, the day will be marked by a BREXIT WAKE in Berlin's Literaturhaus, the prime literary museum of the German capital. The concept of a 'wake' takes inspiration from the traditional Irish funeral custom that brings together friends and relatives on the departure of a loved one.

The event, which will consist of readings and music, will give Anglophiles from Germany and all nations an opportunity to mourn together Britain's (likely) departure from the EU, but also to celebrate 'the imperviousness of British literature and culture to borders and customs administration', as the organisers put it.

Trinity's English fellow Stefano Evangelista is taking part in the organisation of the event thanks to an International Partnership grant awarded by TORCH, which has enabled him to start a long-term collaboration with the Literaturhaus.

The BREXIT WAKE, which starts at 7:30 p.m. and concludes at midnight, features readings by a number of British writers including award-winning novelist Patricia Duncker, author of Hallucinating Foucault (1996). Duncker will read a piece entitled 'BERLIN, 1970', taken from an autobiographical prose essay which addresses the question of borders, frontiers and walls, and the problems generated by a defensive nationalism which creates Them and Us.

A cooperation with the Humboldt University Berlin’s Centre for British Studies, the University of Oxford’s Faculty of English, TORCH, the SAND Journal, and Deveron Projects.

The official press release for the event Brexit »And Now What?« is now out!

You can read it by clicking on the link below: