Call for Papers: Medieval Studies and the Far Right 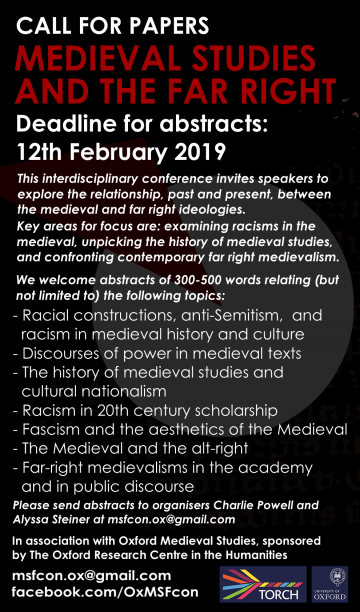 This interdisciplinary conference due to be held on 11 May 2019 invites speakers to explore the relationship, past and present, between the medieval and far-right ideologies. Key areas for focus are: examining racisms in the medieval, unpicking the history of medieval studies, and confronting contemporary far right medievalism. The conference will look to the construction and operation of racial categories in medieval culture and its products. It will challenge the historiography of Medieval Studies, focussing on links to 19th century cultural nationalism and 20th century fascism. Lastly, it will consider whether Medievalists have a responsibility towards the representation and cultural construction of the Middle Ages in public discourse, and how medievalists can develop effective responses to the present-day instrumentalisation of aspects of the medieval by racist and far-right groups.

We welcome abstracts of 300-500 words relating (but not limited to) the following topics:

-Racial constructions, anti-Semitism, and racism in medieval history and culture
-Discourses of power in medieval texts
-The history of medieval studies and cultural nationalism
-Racism in 20th century scholarship
-Fascism and the aesthetics of the Medieval
-Far-right medievalisms in the academy and in public discourse

A conference in association with Oxford Medieval Studies, sponsored by The Oxford Research Centre in the Humanities (TORCH).